Thunderstorms for the Northern Plains and Upper Midwest on Monday
A warm front has made it as far north as southern Manitoba while moisture continues to surge northward. Warm, moist, and unstable air to the east of a slow moving cold front over Montana and western North Dakota will create a favorable environment for at least isolated severe thunderstorm development. The greatest threat for storms capable of producing large hail and damaging winds will be from far eastern South Dakota into central and northern Minnesota. While non-severe storms have already developed, the more robust threat will be during the mid to late afternoon. Storms may diminish in intensity while becoming increasingly isolated after sunset. With that said, there is a threat for a few strong storms across the eastern half of the region through the overnight hours.

Risk for Thunderstorms Monday across the Northeast
A nearly stationary front extends from northern Maine southwestward into western New York and Pennsylvania. A slow moving upper level disturbance is also moving across the region. Moderate instability and wind shear east of the front will support a slight risk for the development of isolated severe storms across portions of the Northeast. A few non-severe thunderstorms are currently ongoing across central and northern New York. Storm coverage and intensity is expected to increase by the late morning and afternoon. The greatest threat for isolated severe storms with the potential for hail and damaging winds will span from northeast Pennsylvania northward into portions of Vermont and New Hampshire. Storm intensity and coverage should diminish significantly after sunset. 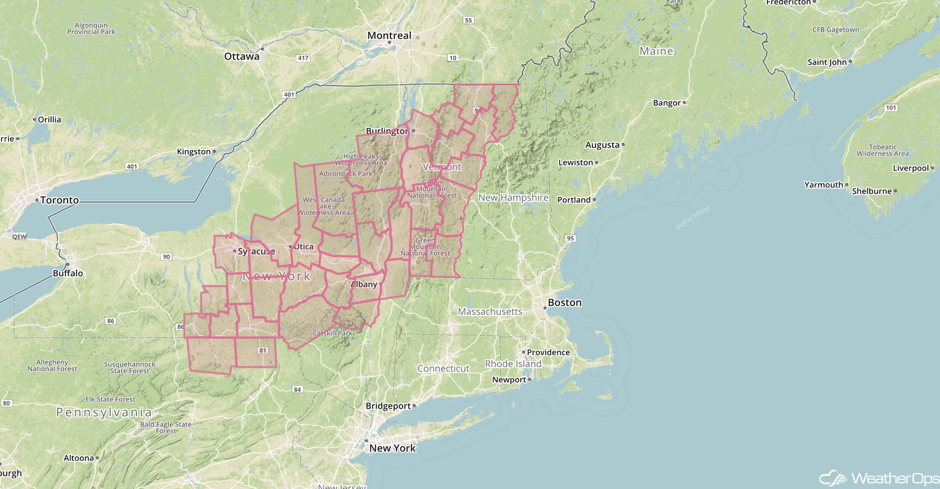 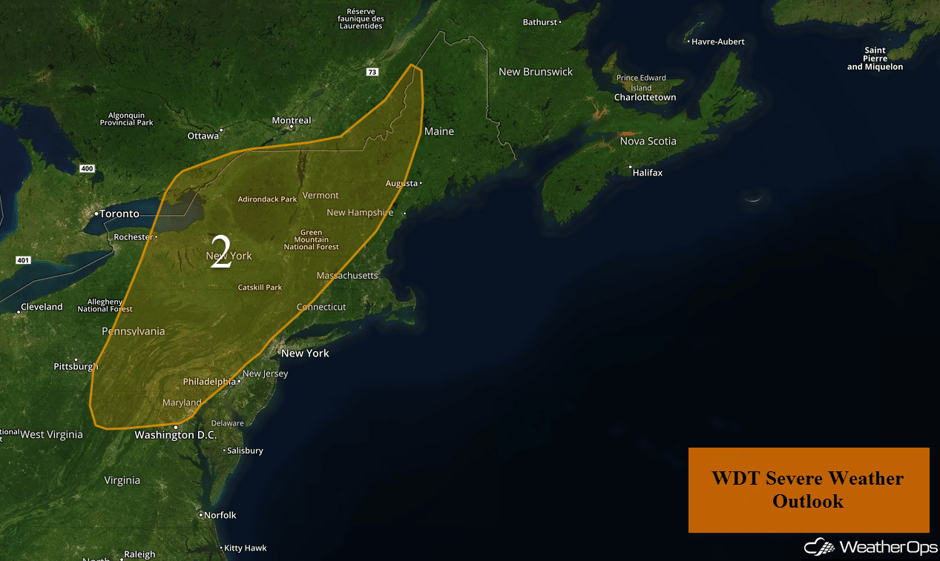 Continued Thunderstorms on Tuesday across the Northern Plains and Upper Midwest
An upper level trough and associated surface low will bring the potential for strong to severe thunderstorms across the Northern Plains and Upper Midwest on Tuesday. Ongoing showers and thunderstorms will likely be present during the morning hours. Strong southerly winds ahead of a cold front will pull warm, moist air northward. This coupled with daytime heating will allow instability to build, leading to the development of isolated thunderstorms during the afternoon. Into the evening and overnight, one or more thunderstorm complexes may develop. Strong to severe winds and hail will be the primary hazards, but an isolated tornado or two cannot be ruled out.

In addition, excessive rainfall may develop across the region. Rainfall amounts of 0.50-1.50 inches are expected with locally higher amounts.

Thunderstorm Potential for the Northern Plains and Upper Midwest Wednesday
A weak area of low pressure will allow for a risk for severe thunderstorms on Wednesday. Southeasterly winds will pump warm, moist air into the region, allowing for the development of showers and thunderstorms during the afternoon over portions of east-central South Dakota and spread southeastward into southern Minnesota. While the risk for severe hazards is low, strong to severe wind gusts and hail will be the main threats.

Once again, excessive rainfall will be a concern on Wednesday. Rainfall amounts of 0.50-1.00 inches are expected with locally higher amounts in excess of 1.50 inches.

Tropical Update
An area of low pressure (red oval) located about 750 miles east of the Windward Islands is moving westward at about 15 mph. The associated shower and thunderstorm activity shows some organization, but no well defined center is present. Some further development is possible before reaching the Lesser Antilles late Tuesday or early Wednesday. After that time, less favorable upper level winds will hinder further development. Regardless of development, this system is forecast to bring locally heavy rainfall and gusty winds to the Lesser Antilles beginning late Tuesday.

Further east, another disturbance (green oval) is located 800 miles west-southwest of the Cabo Verde Islands. Some gradual development is possible over the next few days while it slowly moves west-northwest or northwest.