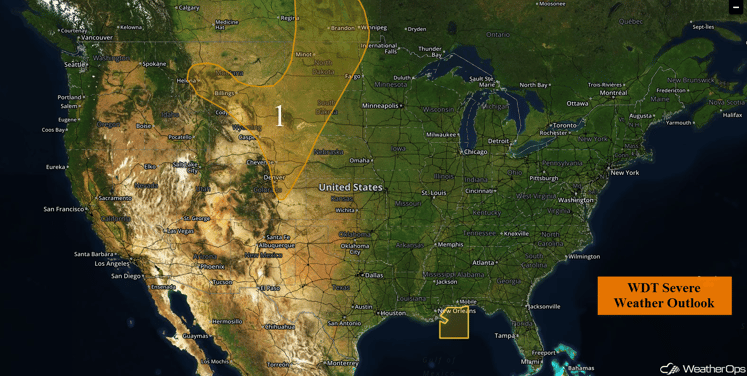 A large upper level low over the Pacific Northwest region will likely result in the passage of one or two shortwave troughs through the Central and Northern Plains this afternoon and evening. While significant severe weather is not anticipated, isolated to scattered showers and thunderstorms, a few marginally severe, are expected by late afternoon or early evening with a low threat for damaging winds and large hail from the High Plains northeastward into Manitoba, Canada.

Update 1:44pm CDT: Thunderstorms are developing across Western Colorado. Hail and damaging winds possible with some of these storms.

Excessive Rainfall Possible Along the Gulf Coast Monday through Wednesday

A stationary front extending from the Southeast into the Mid Atlantic will serve as a focal point for the development of showers and thunderstorms across the region. With deep moisture spreading northward from the Gulf of Mexico, there will be a potential for excessive rainfall across the region. General rainfall amounts of 0.50-1.50 inches, with locally higher amounts in excess of 2 inches will be possible. With recent heavy rains, flooding will also be possible. 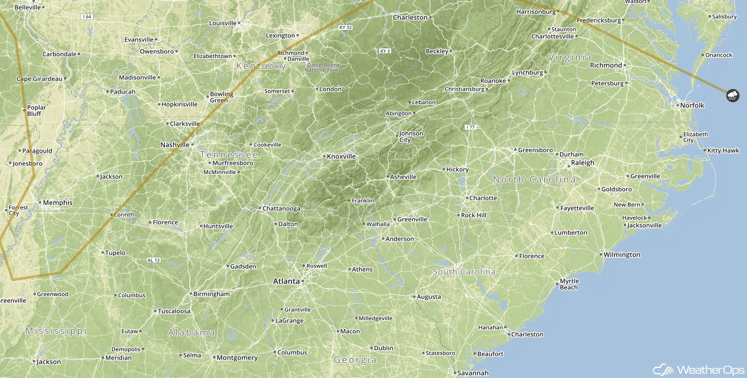 A cold front moving southward out of Canada combined with a developing surface low progressing eastward out of the lee of the Rockies during the afternoon and evening, increasing in coverage after sunset. Conditions are expected to be favorable for the development of severe thunderstorms, with the highest risk across eastern Montana, southwest North Dakota, and northwest South Dakota. Large hail and damaging winds will be the primary hazards, but a few tornadoes cannot be ruled out during the afternoon and early evening.

Excessive Rainfall Possible Tuesday and Wednesday Across Portions of Arizona

A strong upper level disturbance is forecast to move east-northeast across the Northern Plains and into southern Canada on Wednesday. At the surface, a strengthening low pressure area and cold front will move eastward out of the High Plains region. Thunderstorms should become focused near the low and along and ahead of the cold front by the afternoon and evening hours across the Plains. Conditions should allow for the potential for severe thunderstorms capable of large hail, damaging winds, and isolated tornadoes. Storms may evolve into an organized complex by the late evening and overnight hours as they spread eastward into central and eastern Minnesota, with the threat transitioning to hail and damaging winds.