Thunderstorms may develop along the Atlantic Coast Monday ahead of an area of low pressure and cold front. Upslope flow may allow for thunderstorm development for the Central and Southern High Plains Monday. A stalled front may bring a risk for excessive rainfall from the Southern Plains to the Lower Mississippi Valley.

Risk for Thunderstorms Monday for the Central and Southern High Plains
Sufficient moisture, terrain effects, and daytime heating will all play a role in the development of thunderstorms in the afternoon to evening hours today. Once storms do form, rapid intensification is expected. The primary hazards will be damaging winds and large hail. These storms are expected to weaken significantly after sunset when daytime heating is lost.

Excessive Rainfall for the Southern Plains into the Lower Mississippi Valley on Monday
A cold front is beginning to stall from western Tennessee southward into central Texas. Heavy showers and thunderstorms have been ongoing across portions of Texas and south of the front. The threat for excessive rainfall will continue across central and eastern Texas throughout the day, but the primary threat may be through the late morning. Additional storm development and heavy rainfall will expand eastward across portions of Louisiana, Mississippi, and Alabama throughout the day. Widespread rainfall amounts of 1-2 inches with locally higher amounts are likely. 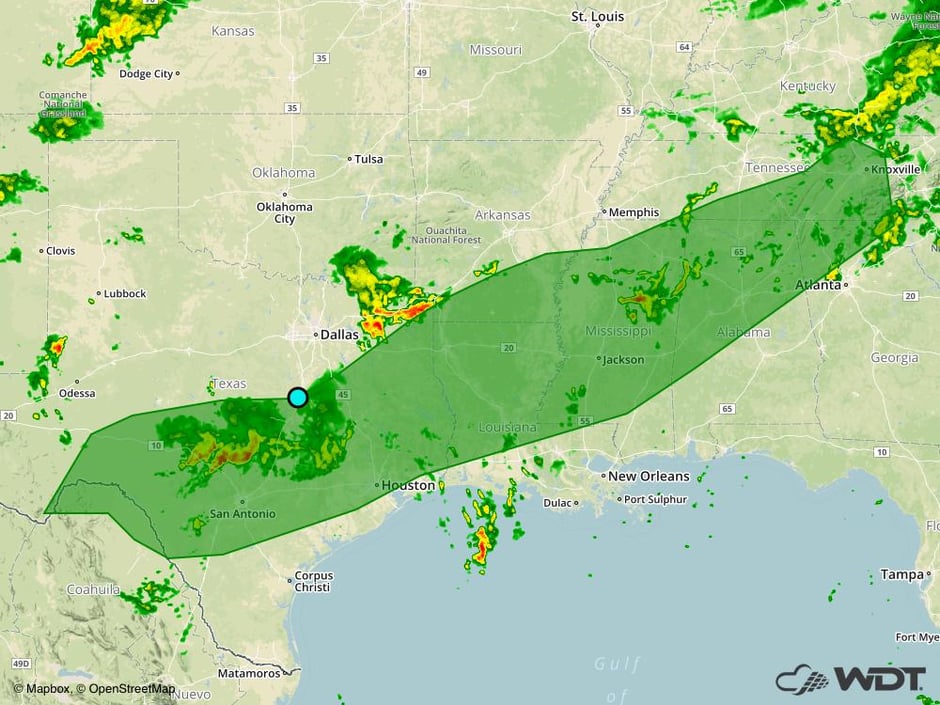 Potential for Excessive Rainfall Tuesday for Eastern North Carolina
A slow moving cold front and plentiful moisture will promote the development of heavy showers and thunderstorms on Tuesday. Heavy rain may be ongoing Tuesday morning with activity redeveloping in the afternoon. Rainfall amounts of 1-3 inches with locally higher amounts are expected. 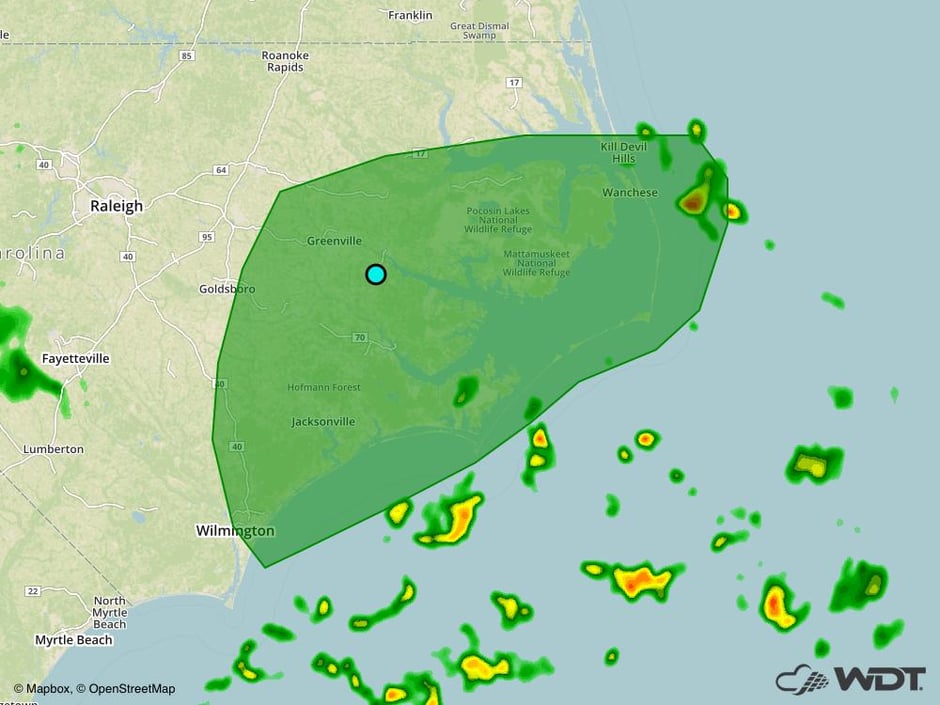 Thunderstorm Potential for the Western High Plains on Tuesday
High pressure centered over the Midwest and Central US will promote upslope flow across the Western High Plains. Winds originating from the Gulf will allow moisture to move northward and instability to increase. As a result, there will be a risk for heavy rain and isolated severe thunderstorms. Rainfall amounts of 1-2 inches are expected. With any storms that develop, large hail and damaging winds will be the primary hazards. 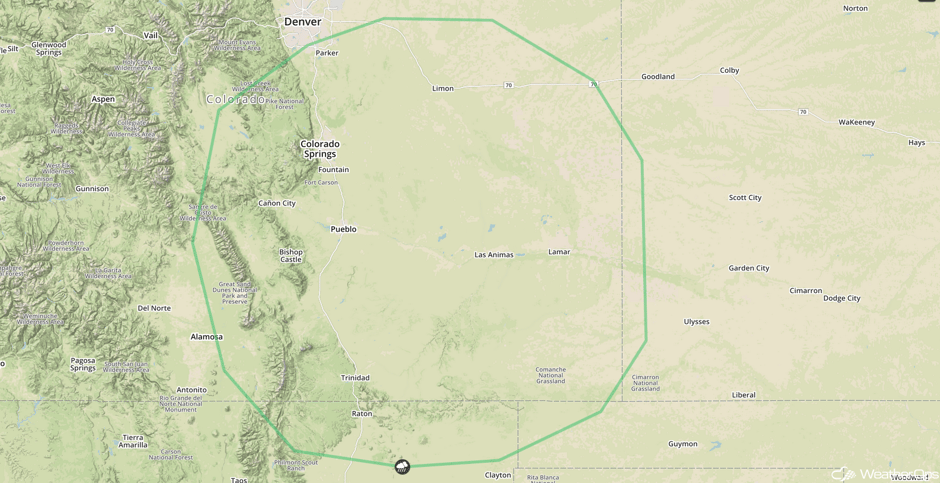 Strong to Severe Thunderstorms for the Northern Plains on Wednesday
A few thunderstorms may develop from the Dakotas into Nebraska on Wednesday. A weak trough and cold front along with an upper level disturbance will allow for the development of thunderstorms. Damaging winds will be the primary hazard. 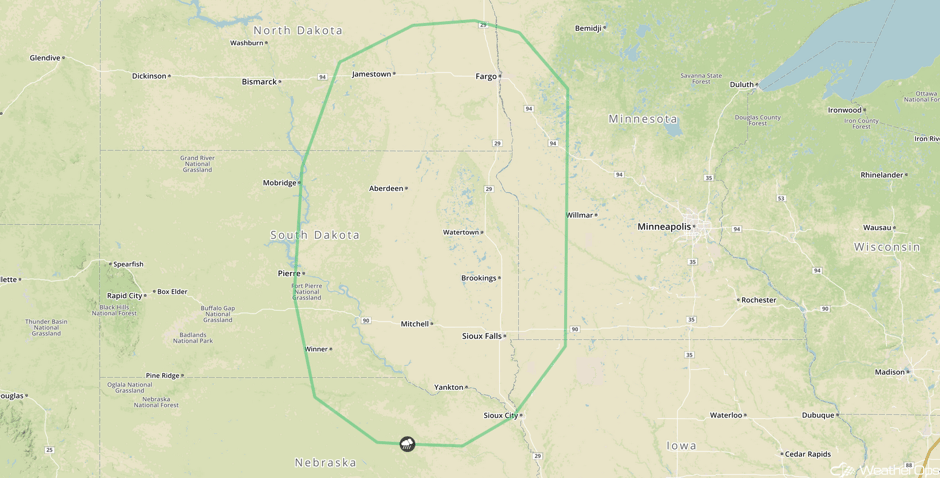 Tropical Update
An area of low pressure (red oval) between the Cabo Verde Islands and the Lesser Antilles is producing disorganized showers and thunderstorms. Unfavorable conditions should limit development, but conditions could become conducive for development by the end of the week. The system will continue to move west-northwestward.

Tropical Storm Franklin (green oval) is currently 205 miles east of Belize City. Franklin will continue to move west-northwestward at 14 mph. The east coast of the Yucatan Peninsula will be impacted tonight with the rest of the Peninsula affected on Tuesday. Maximum sustained winds are at 60 mph and may increase to hurricane strength this evening or tonight. Some weakening is expected on Tuesday.