Thunderstorms from the Northeast into the High Plains on Monday
A cold front extending from the Northeast southwestward into the High Plains will allow for the development of scattered thunderstorms as it moves southeastward. Some storms have developed this morning, but the primary timing for thunderstorm development will be during the afternoon and evening. Some storms will be strong to severe with damaging winds, hail, and isolated tornadoes potential hazards. 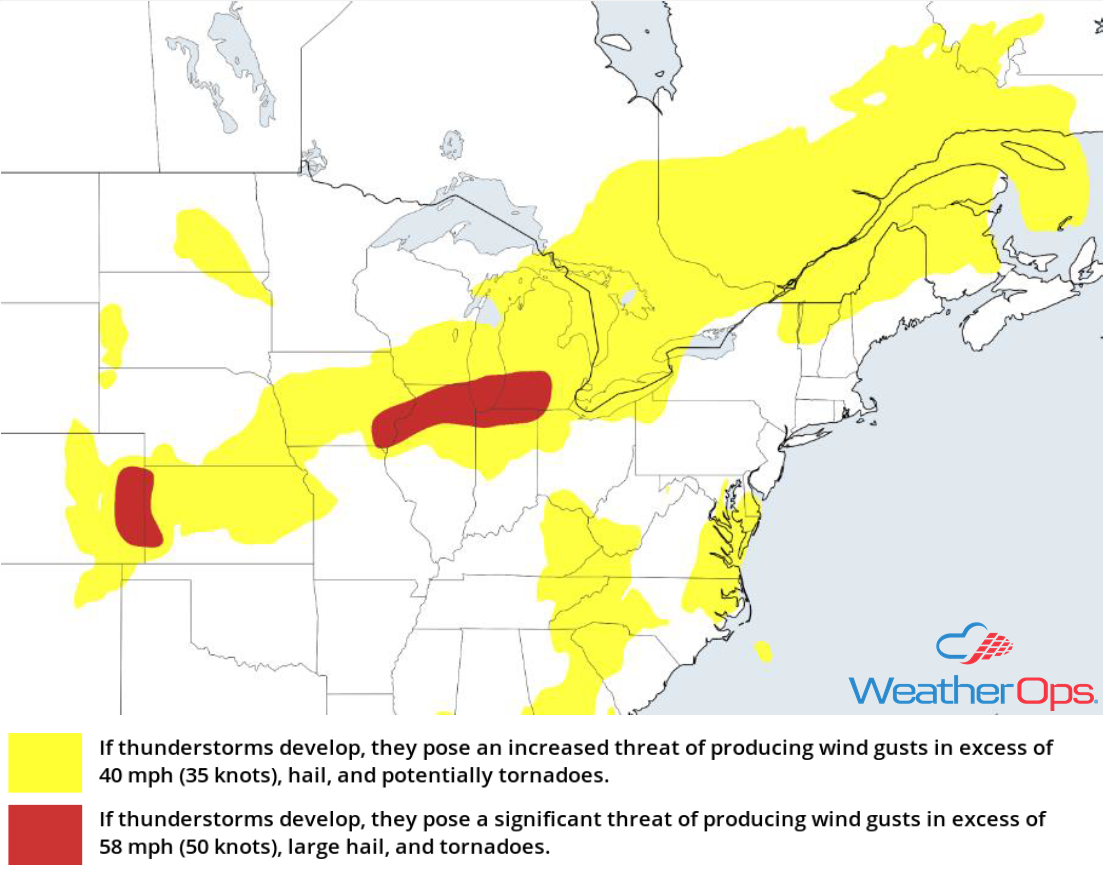 Excessive Rainfall Monday from the High Plains to the Great Lakes
In addition to the severe weather risk described above, there will be a potential for excessive rainfall. Rainfall accumulations will range 1-2 inches with locally higher amounts in excess of 3 inches, leading to the potential for localized flooding. 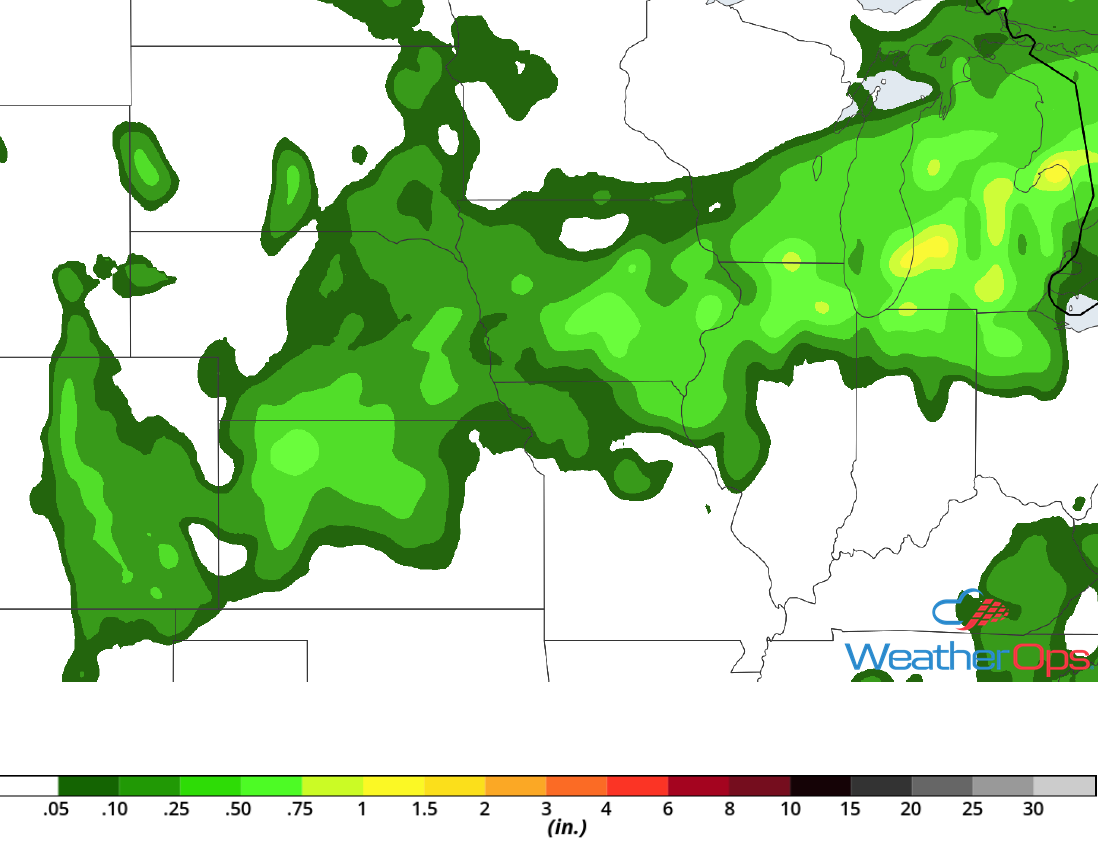 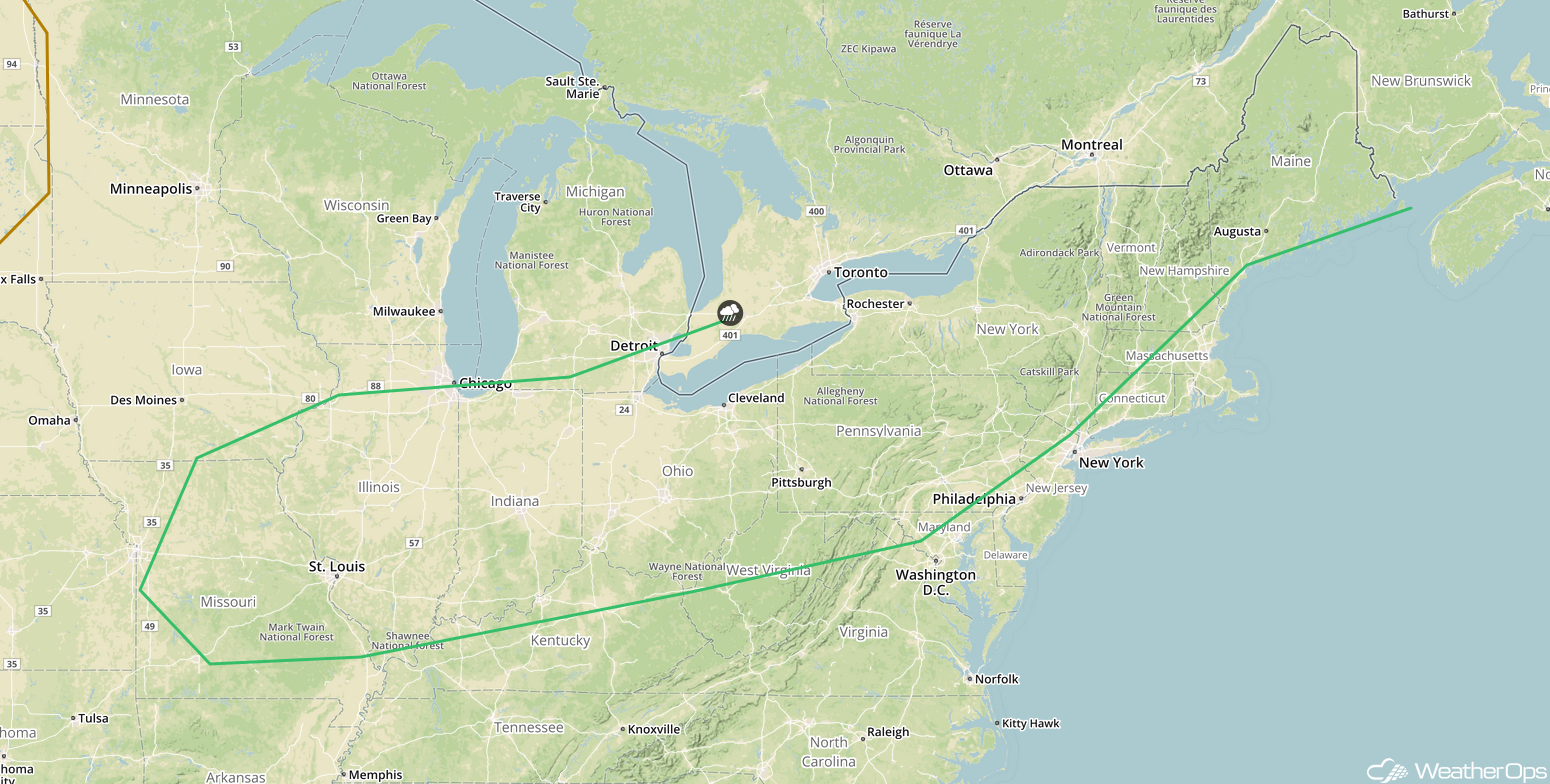 Thunderstorm Potential for the High Plains Tuesday and Wednesday
As the tail end of a cold front drops southward into the Central and Southern High Plains on Tuesday, isolated thunderstorms are expected to develop during the afternoon and early evening. Favorable upper level winds along with sufficient wind shear will allow for a marginal risk of strong to severe thunderstorms. Gusty winds and hail will be the primary hazards with these storms. This front will remain in place on Wednesday, with another risk for thunderstorms expected. 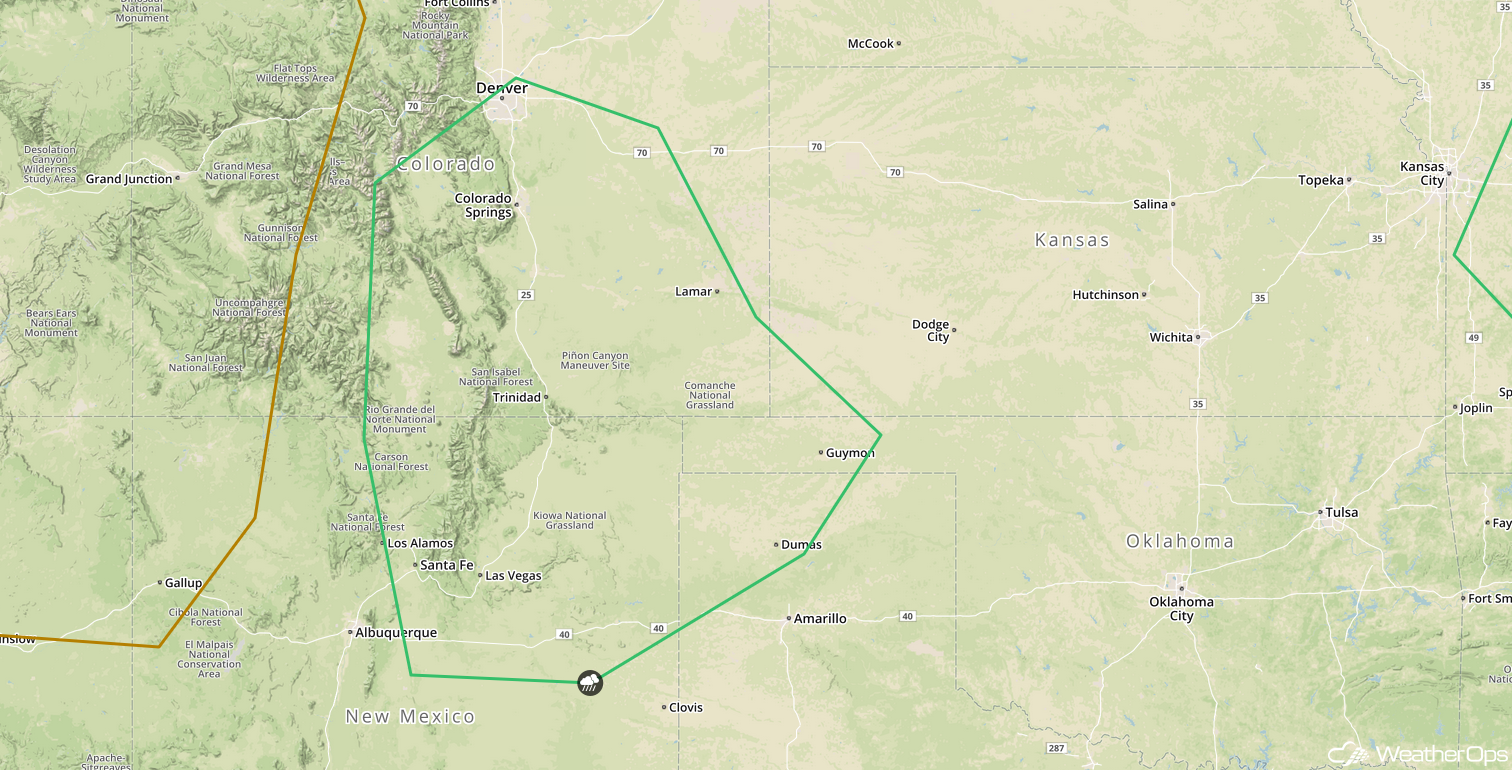 Potential for Excessive Rainfall Tuesday from the High Plains into the Ozarks
As a cold front moves southward slowly, showers and thunderstorms will develop along and ahead of the front. Rainfall totals will range 1-2 inches with locally higher amounts in excess of 3 inches. This could allow for a risk of increased flooding, especially in areas that receive heavy rainfall on Monday. 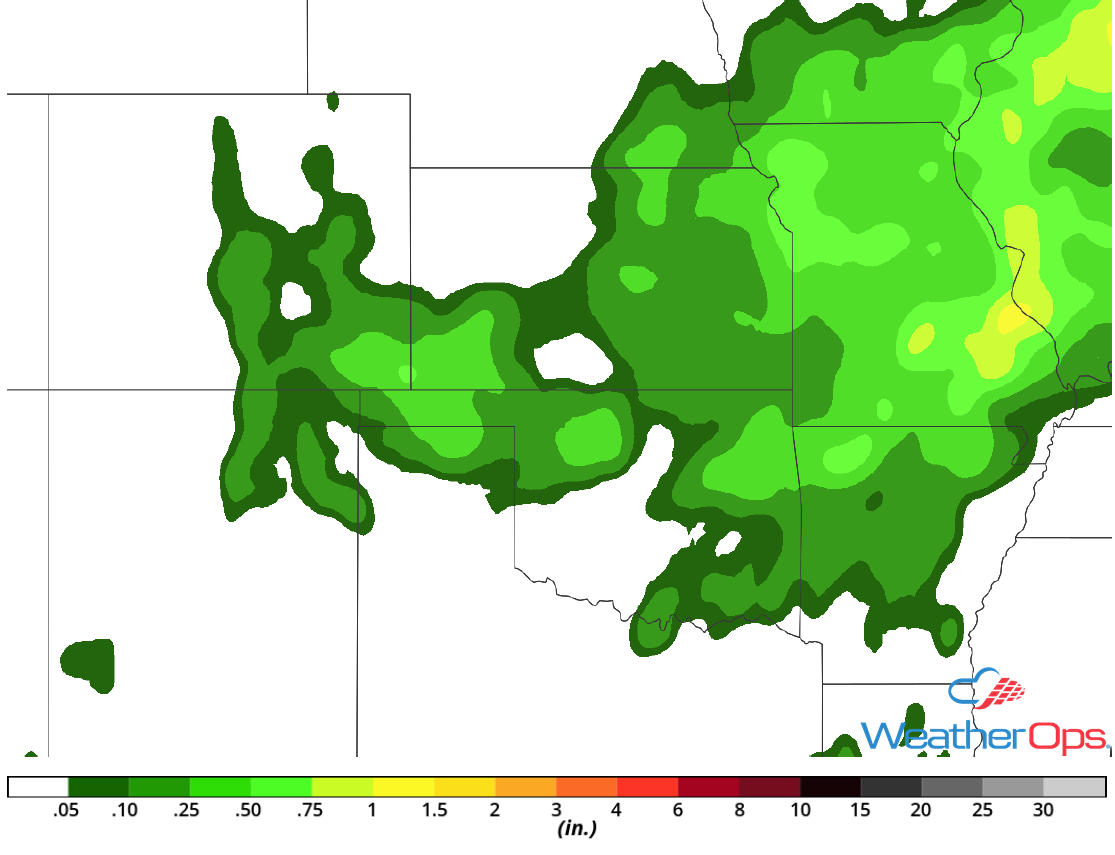 Thunderstorms for the Mid Atlantic and Central Appalachians on Wednesday
A cold front will continue moving southeastward on Wednesday with scattered thunderstorms developing along and ahead of it during the afternoon. A few strong to severe thunderstorms could develop with gusty winds the primary hazard. Storms could persist into the early evening before diminishing after sunset. 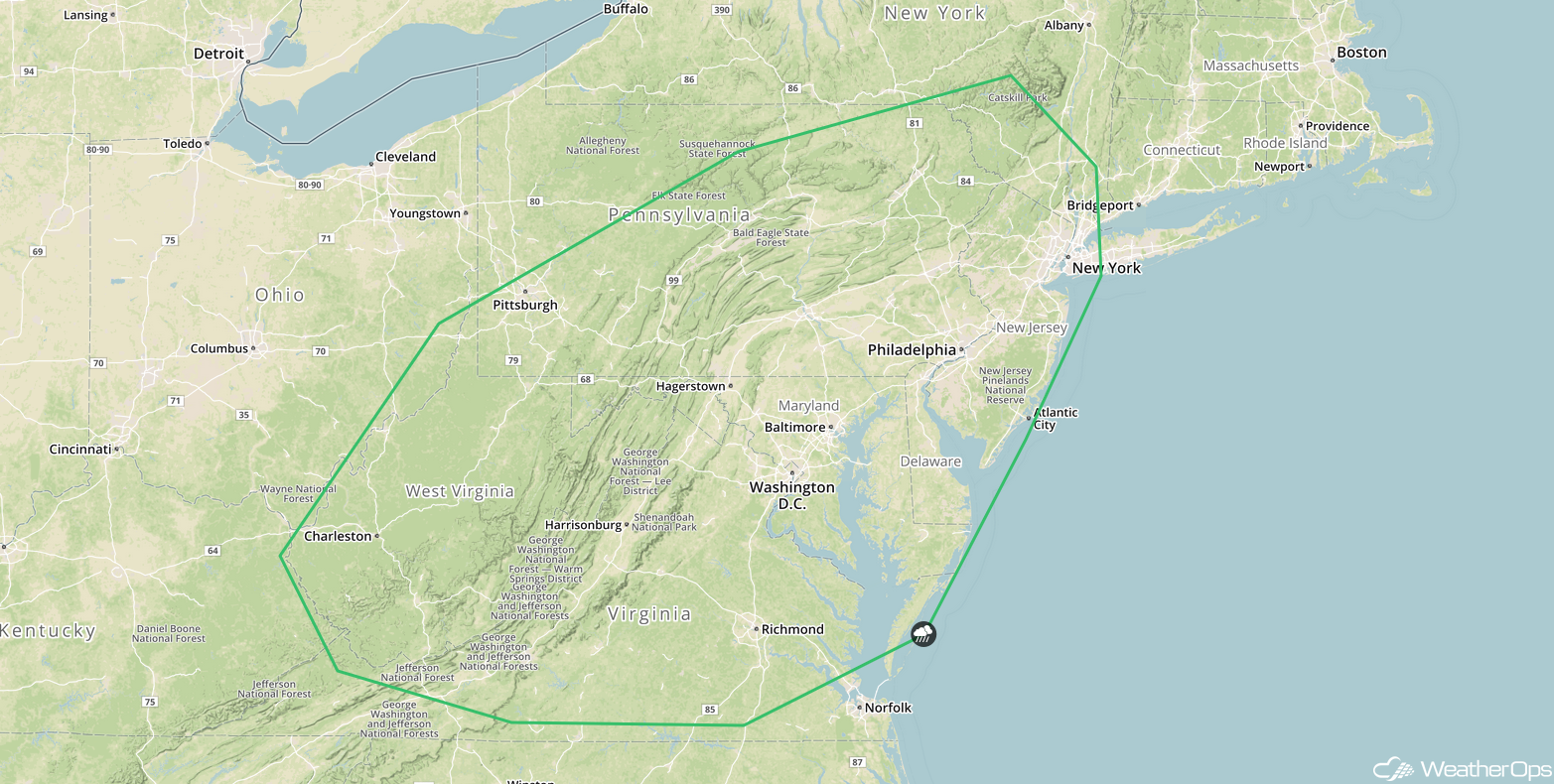 Excessive Rainfall Wednesday for the Southern Plains
Scattered to widespread shower and thunderstorm activity is forecast to develop along and south of an advancing cold front on Wednesday as it begins to stall over the region. Rainfall amounts of 1-2 inches can be expected for most of the region with locally higher amounts in excess of 3 inches. This could lead to a flooding threat over the High Plains of northeast New Mexico as this may be the third consecutive day of heavy rainfall for this area. 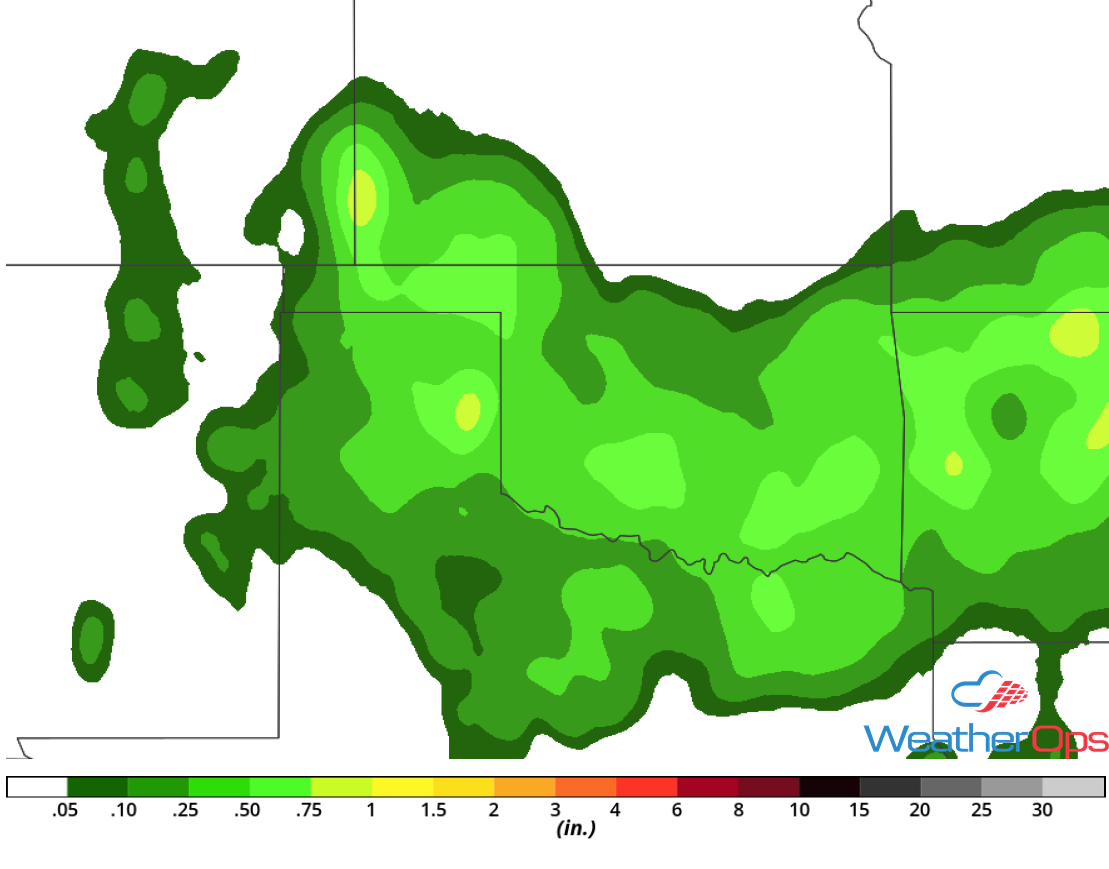 Tropical Update
A non tropical area of low pressure centered about 1200 miles west-southwest of the Azores is interacting with an upper level low. Although the system is producing disorganized showers and thunderstorms to the east and northeast of the center, environmental conditions are only marginally conducive for the low to acquire subtropical or tropical characteristics. The low is expected to move northward or north-northeastward over cooler waters by Tuesday night. Development is not expected after that time.

A Look Ahead
Rain may continue across the Southern Plains on Thursday as the cold front described above continues to move southward. As the front continues to move southward on Friday, showers and thunderstorms may develop across portions of Texas and Louisiana. This activity will spread into the Mid Mississippi Valley on Saturday. By, Sunday, heavy rain will extend from the Tennessee Valley into the Southeast.