Widespread and catastrophic flooding is expected to continue across East Texas into Southern Louisiana Monday as Harvey continues to track to the southeast. Potential Tropical Cyclone Ten is forecast to become a tropical storm on Monday, bringing thunderstorms excessive rainfall to the coastal areas of the Carolinas.

Tropical Storm Conditions Continuing for the Texas and Louisiana Gulf Coasts and western Gulf of Mexico through Thursday
Tropical Storm Harvey continues to produce intense thunderstorm activity to the east-northeast of the center. Harvey's maximum sustained winds remain at 35 knots and a tropical storm due to strong winds in the outer bands. Harvey is on the coastline, but will move out over the open Gulf waters. This will allow for some re-strengthening with sustained winds increasing to 40 knots. After that time, landfall over Galveston will allow for weakening as the storm moves inland again across Texas and Louisiana.

Extreme rainfall and flooding will continue across portions of Texas and Louisiana today. Widespread additional accumulations of 15-20 inches with locally higher amounts in excess of 25 inches are expected. In addition, winds 40-45 mph with gusts in excess of 50 mph are forecast as well as a few isolated tornadoes. A band of thunderstorms has developed over southern Louisiana in association with Harvey. These storms will have the potential for damaging winds and tornadoes through the early afternoon. 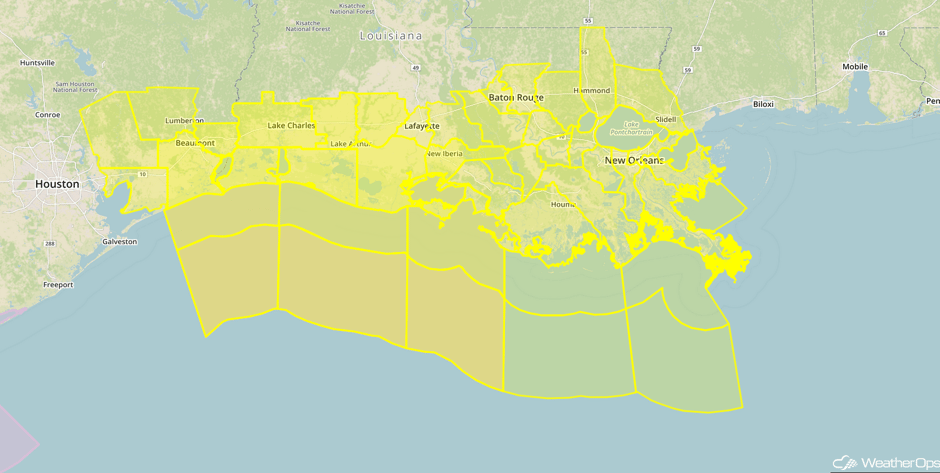 Risk for Thunderstorms Monday across the Coastal Carolinas
A tropical feature moving northward along the coast may allow for the development of isolated supercell thunderstorms. Storms may begin by midday and continue into the evening, with the system moving north of the region this evening. Damaging winds and isolated tornadoes will be the primary hazards. In addition, winds in excess of 50 mph and rainfall amounts of 3-6 inches with locally higher amounts in excess of 8 inches are expected. This rainfall may cause flooding in some areas. There will also be a risk for a few tornadoes. 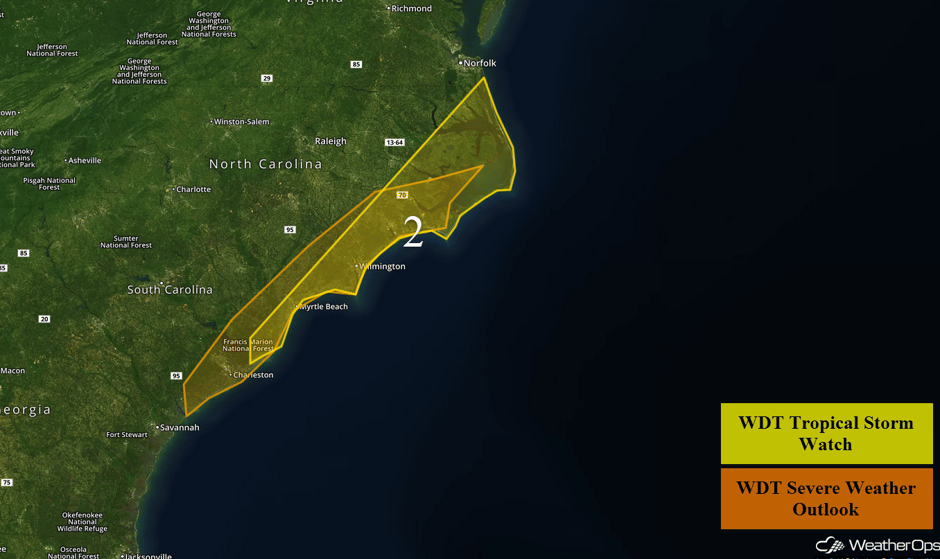 Flooding from Tropical Storm Harvey Continuing through Wednesday from East Texas into Southern Louisiana and Mississippi Valley
The center of Harvey is forecast to move over the Gulf of Mexico on Tuesday, with re-intensification possible. Widespread heavy to extreme rainfall will be likely from Freeport, Texas to the Louisiana/Texas border. Periods of heavy to extreme rainfall is forecast along the Louisiana coast as well. An additional several inches with locally higher amounts in excess of a foot are forecast over areas which have already received several feet of rain. Severe to catastrophic flooding will continue across the region. By Wednesday, Harvey will begin a northerly track, shifting the highest potential for heavy to extreme rainfall into East Texas and the Mississippi Valley. A widespread 2-4 inches with isolated higher amounts in excess of 8 inches are expected. Rainfall should begin to decrease slightly by Wednesday. 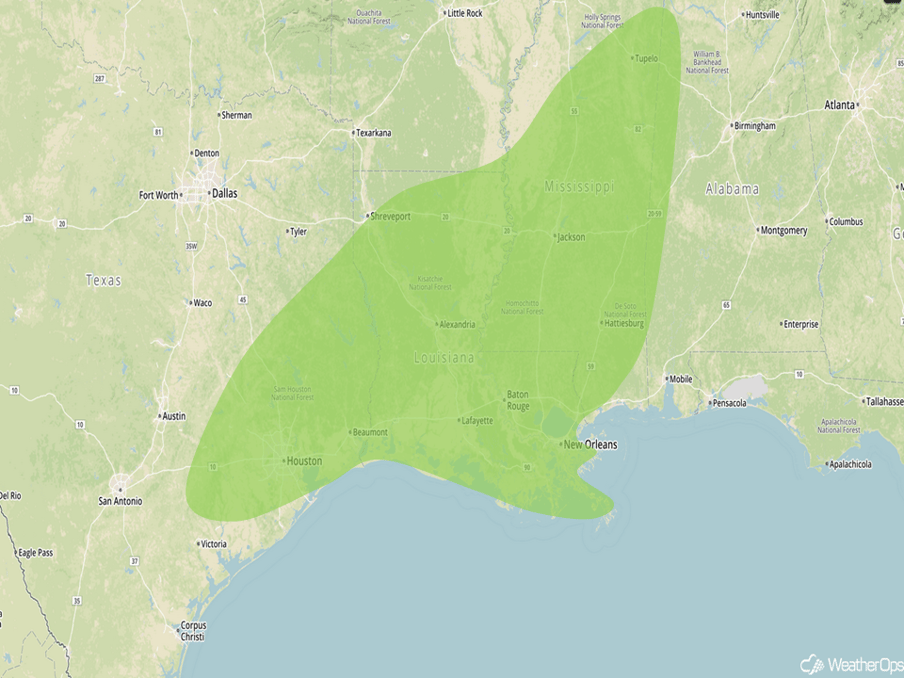 Tropical Update
The center of Tropical Storm Harvey (green oval) is 25 miles east-northeast of Port O'Connor, Texas and is moving toward the southeast at 5 mph. A gradual turn to the northeast and slow forward speed are expected Tuesday. On the forecast track, the center of Harvey will be just offshore of the middle and upper Texas coast Tuesday night. Maximum sustained winds are near 40 mph with higher gusts. Some slow intensification may occur over the next 48 hours.

Potential Tropical Cyclone Ten (red oval) is located about 160 miles south-southwest of Charleston, South Carolina and is moving toward the north-northeast at 9 mph. This motion is expected to continue with an increased in forward speed expected during the next couple of days. On the current forecast track, the system will move over or near the South Carolina coast today and move along the Outer Banks of North Carolina on Tuesday. Maximum sustained winds are near 35 mph with higher gusts. The disturbance will likely become a tropical depression or tropical storm later today.

A tropical wave and associated area of low pressure located just offshore the coast of western Africa (blue oval) is producing  a large area of showers and thunderstorms. This system has become better organized over since yesterday and could become a depression over the next few days in the eastern Atlantic. This system is forecast to move westward at 15-20 mph during the next several days. Regardless of development, heavy rain is forecast for the Cabo Verde Islands through Wednesday.

A Look Ahead
Heavy to excessive rainfall will continue from East Texas into the Lower Mississippi Valley Thursday into Friday as Harvey continues to move northward. Widespread amounts of 1-3 inches with isolated higher amounts in excess of 8 inches are forecast. Widespread flooding will continue across East Texas with more isolated flash flooding across the Lower Mississippi Valley into Friday.