A cold front will be the focus for the development of thunderstorms Monday from the Plains into the Great Lakes. Thunderstorms may develop across the Mid Atlantic during the afternoon and evening as an upper level disturbance moves across the region.

Thunderstorms Monday from the Great Plains to the Great Lakes
An area of low pressure currently in the High Plains will track eastward into the Great Lakes and slowly begin to strengthen today. Areas of strong to severe thunderstorms are currently ongoing across the region. These thunderstorms are forecast to slowly weaken as the morning continues. Into the afternoon, the cold front associated with the aforementioned area of low pressure will also track eastward across the Plains and Midwest. With the cold front providing ample lift, ample moisture, and strong wind shear in place, scattered showers and thunderstorms are forecast to develop along and ahead of the front. These storms will likely become linear, with a few becoming strong to severe. Large hail, damaging winds, and an isolated tornado or two will all be potential hazards. 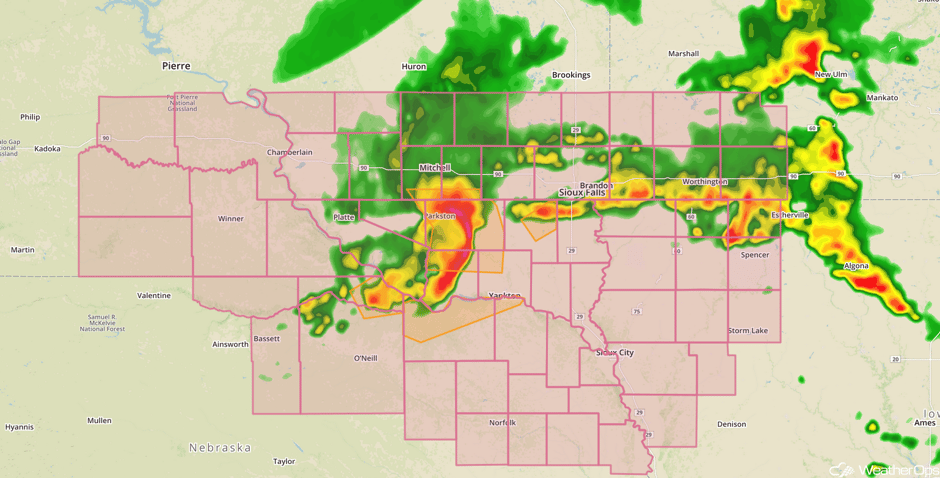 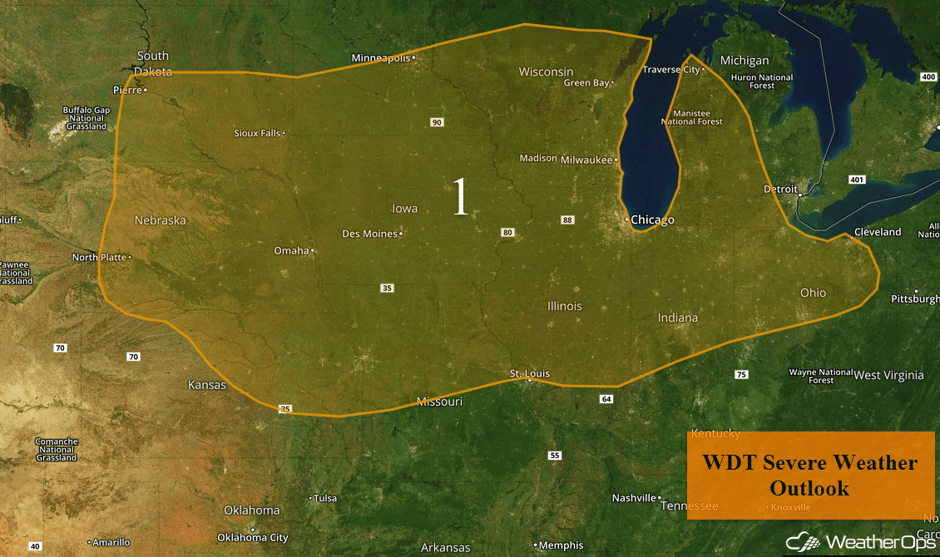 Risk for Thunderstorms across the Mid Atlantic on Monday
An upper level trough will make its way across eastern Pennsylvania and the Mid Atlantic. Daytime heating will create ample instability across the region by the afternoon hours. As the trough makes its way across the region, wind shear will increase. With strong instability and wind shear in place, scattered thunderstorms are expected to develop. A few thunderstorms may become strong to severe with damaging winds the primary hazard and a lesser risk for hail. Thunderstorms are expected to quickly diminish after the sun sets this evening. 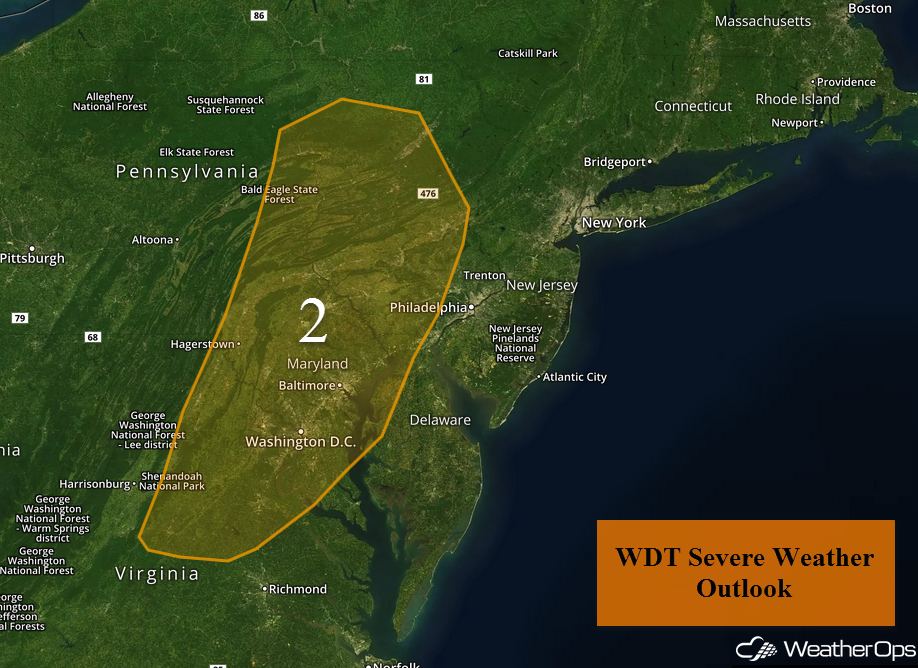 Thunderstorm Potential Tuesday from the Southern Plains to the Northeast
An upper level trough is forecast to move eastward across the Great Lakes region on Tuesday. At the surface, a cold front associated with an area of low pressure will move east and southeastward through the Great Lakes southwestward through the Southern Plains. Thunderstorms are forecast to develop along and ahead of the front. Some storms may develop during the morning hours, but more robust development is anticipated during the afternoon and evening with some severe storms possible. Large hail and damaging winds will be the primary hazards, but an isolated tornado or two cannot be ruled out.

Excessive Rainfall across Oklahoma and Western Arkansas on Tuesday
As a cold front moves into Southern Plains, heavy showers and thunderstorms are anticipated ahead of the front across portions of Oklahoma and western Arkansas. Rainfall amounts of 1-2 inches with locally higher amounts in excess of 3 inches are forecast and may lead to an excessive rainfall threat. 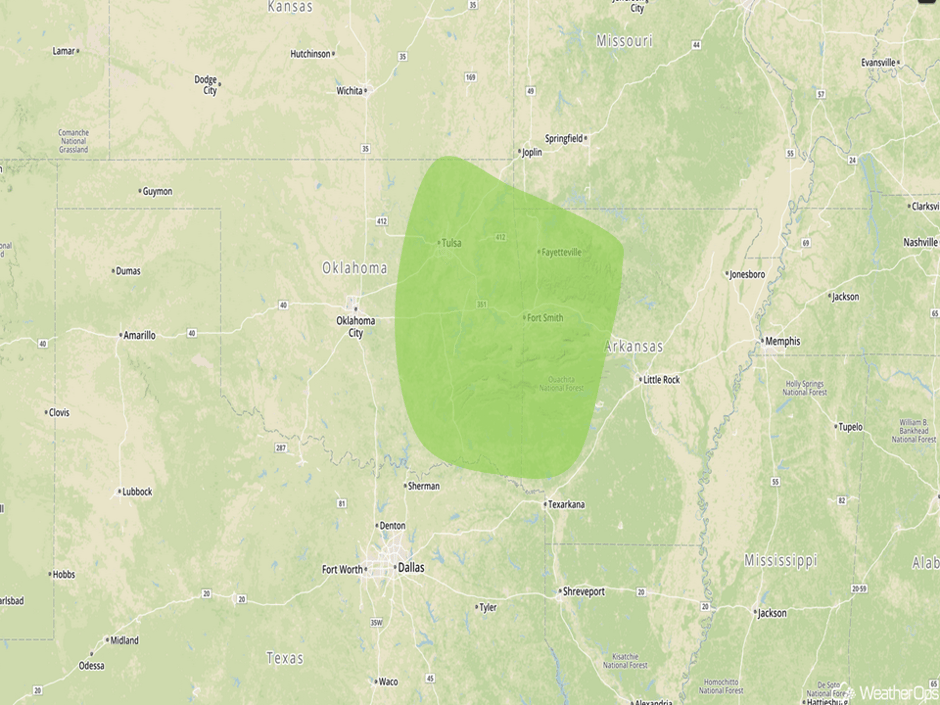 Thunderstorms Wednesday across the Southeast
Thunderstorms may develop on Wednesday across portions of the Carolinas and Virginia as a cold front moves into the region. This front will be the focus for the development of thunderstorms, with the primary timing during the afternoon and evening. Increasing instability and favorable mid and upper level winds will allow for a marginal risk of strong to severe thunderstorms with gusty winds the primary hazard. Some areas will have the potential for excessive rainfall with rainfall amounts of 0.50-1 inch and locally higher amounts.

Tropical Update
An area of low pressure, associated with the remnants of Harvey (green oval), continues to produce a large area of disorganized showers and thunderstorms over the northwestern Caribbean Sea. Some development of this system is  still possible before it reaches the coast of Belize or the Yucatan Peninsula early Tuesday. The disturbance is forecast to move into the Bay of Campeche early Wednesday, where environmental conditions are expected to be more conducive for redevelopment. Regardless of development, locally heavy rainfall and gusty winds are likely to spread westward across northern Nicaragua, Honduras, Belize, and the Yucatan Peninsula during the next several days.

A trough of low pressure near the southeastern and central Bahamas (red oval) is producing disorganized showers and thunderstorms. Environmental conditions are expected to be unfavorable for the development of this system over the next day or so as it moves west-northwestward at about 15 mph across the Bahamas. Conditions are expected to become more conducive for development later in the week as it approaches Florida and the adjacent waters.

A large area of showers and thunderstorms located about 800 miles east-northeast of the Northern Leeward Islands (blue oval) associated with an area of low pressure. This area of low pressure is interacting with a large upper level low over the central Atlantic. Upper level winds are not conducive for the development of this system while it moves northwestward over the central Atlantic at 10-15 mph.

A Look Ahead
A frontal system is forecast to push eastward across the Northern US on Friday, with scattered thunderstorms expected to develop during the afternoon and evening hours. An upper level disturbance along the US-Canada border may provide the support for some strong to severe thunderstorms across the region. Gusty winds and hail will likely be the primary hazards.