Thunderstorms may develop across portions of the Southern Plains into the Ozarks Monday ahead of a cold front. Scattered thunderstorms are expected from the Mid Mississippi Valley as an area of low pressure moves through the region. 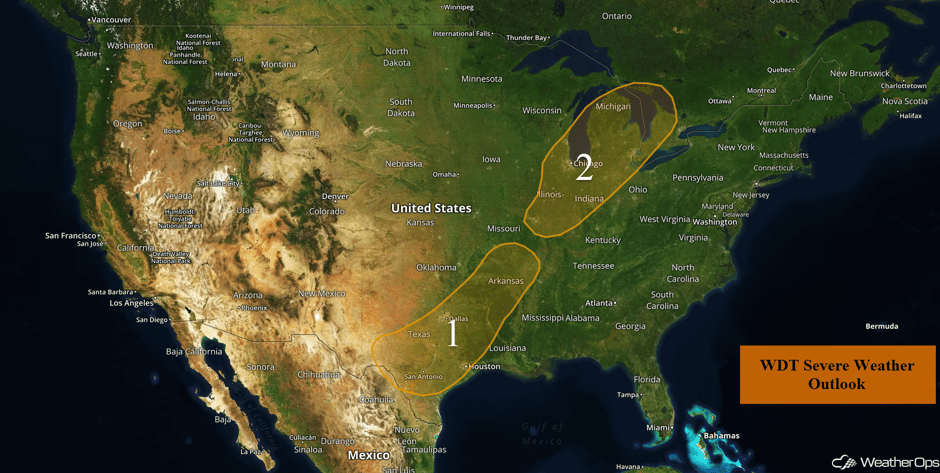 Region 1
Strong to severe thunderstorms may develop across Region 1 on Monday ahead of a cold front during the late morning and early afternoon. These storms will move southeastward during the day and into the evening. Large hail and damaging winds will be the primary hazards, but an isolated tornado cannot be ruled out. Storms will likely evolve into a squall line later in the evening, posing a primarily damaging wind and heavy rainfall risk.

Region 2
Morning showers and thunderstorms across Region 2 will clear the area by late morning. During the afternoon, additional thunderstorms will develop as an area of low pressure moves through the region. Scattered thunderstorms are expected to develop across northern Illinois and increase in coverage and intensity early in the evening before shifting eastward. Primary hazards will be damaging winds with any thunderstorms that become severe. An isolated tornado or two cannot be ruled out from northern Illinois into southern Michigan.

Strong to Severe Thunderstorms Possible Across the Northeast on Tuesday
As a warm front moves northward across the Northeast during the morning hours on Tuesday, warm moist air will track northward ahead of an area of low pressure. Instability will build ahead of the low as daytime heating increases. Given this forcing and instability, showers and thunderstorms are forecast along and ahead of a cold front, with a few storms becoming severe. Hail and damaging winds will be the primary hazards with the stronger storms. Morning shower and thunderstorm activity may decrease the severe risk later in the day.

Strong to Severe Thunderstorms Possible Tuesday across Texas
Ongoing shower and thunderstorm activity just ahead of a cold front will track toward the coast throughout the day. With warm air ahead of the front some instability could build ahead of the front, some modest instability could build across the region on Tuesday. This instability may allow for the development of strong to severe thunderstorms throughout the day. Hail and damaging winds will be the primary hazards with any of the stronger storms.

A Look Ahead
A weak area of low pressure over the Central High Plains may allow for a few strong to severe thunderstorms across the Central and Southern Plains on Thursday. With any storms that develop, large hail, damaging winds, and tornadoes will all be possible.  On Friday, an upper level low will move across southern Canada, bringing the potential for strong to severe thunderstorms to portions of the Northern Plains during the afternoon and evening.