Severe thunderstorms are expected across portions of the Plains on Friday as an upper level trough moves into the area. Excessive rainfall may develop across the Midwest and Central Plains ahead of a cold front. Elevated winds and seas will continue across the Gulf of Mexico.

Thunderstorms for the Central and Southern Plains on Friday
A shortwave trough and its associated surface low is forecast to progress eastward into the Plains today, bringing a threat of strong to severe thunderstorms.

There is currently shower and thunderstorm activity across portions of Nebraska, Kansas, and Missouri. However, new isolated development is forecast to occur during the afternoon and early evening hours along and ahead of the low's frontal boundaries where warm, moist air and the best instability will be present. Primary hazards initially will be large hail, damaging wind gusts, and a few isolated tornadoes. However, going into the evening hours, when a more linear pattern is forecast to take place as the cold front accelerates eastward, strong to severe wind gusts will be the primary threat. 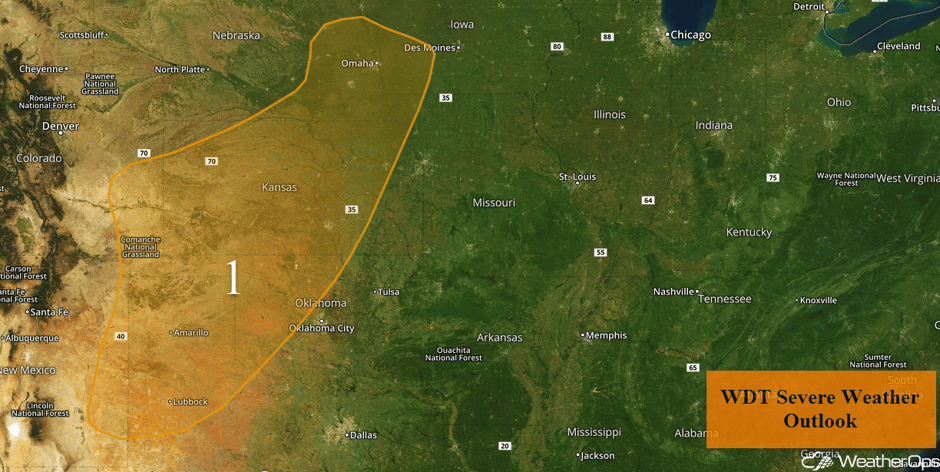 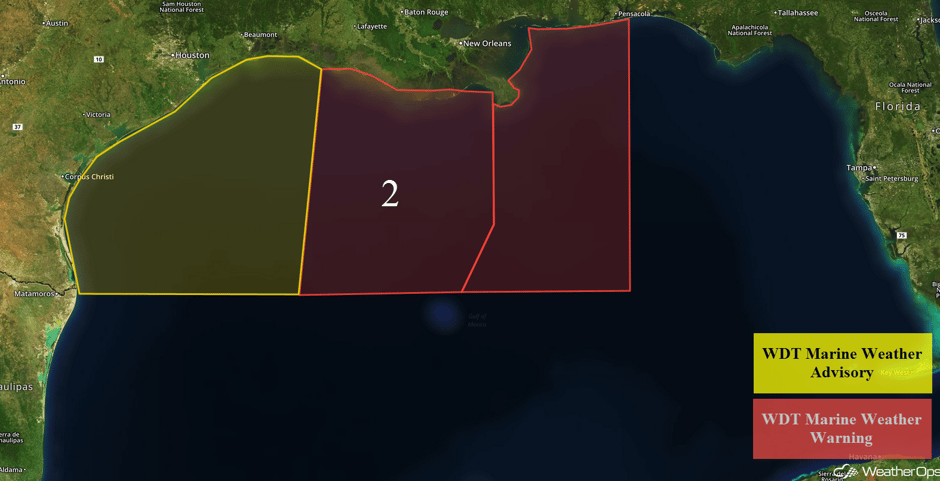 Excessive Rainfall Friday for the Midwest and Central Plains
Along the warm front extending to the east of the developing area of low pressure, widespread convection is expected to develop into the morning and afternoon. As the area of low pressure shifts to the east, additional rainfall is expected to the north of the low. With this activity, heavy to excessive rainfall is likely. Total rainfall accumulations of 2-3 inches with locally higher amounts in excess of 5 inches are expected. 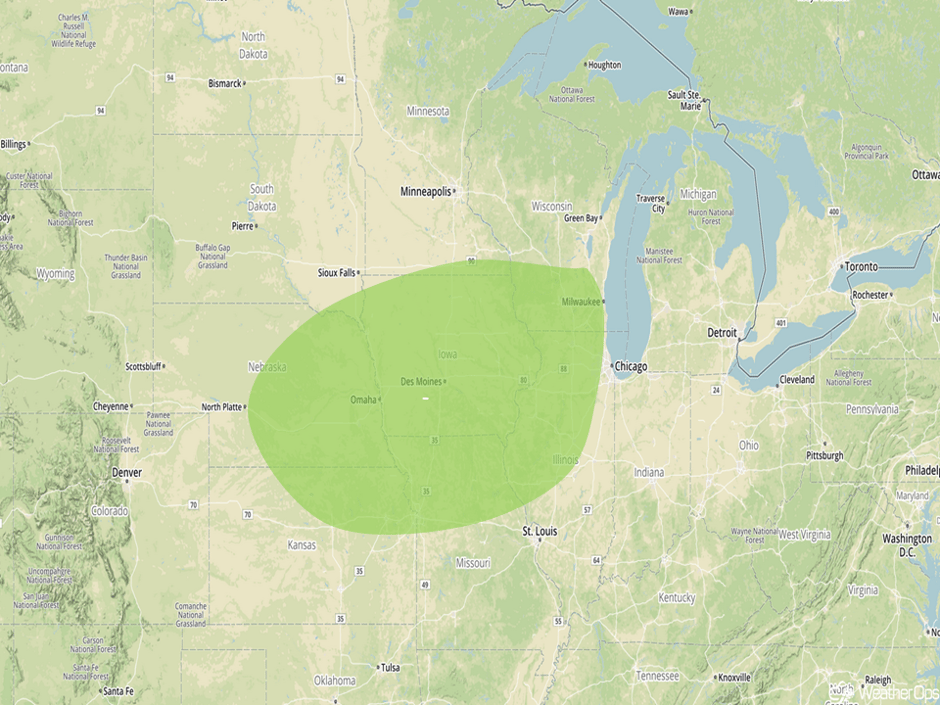 Thunderstorms Saturday for the Gulf Coast
As Tropical Storm Nate approaches the central Gulf Coast Saturday, there will be a risk for strong to severe thunderstorms. Within the northeastern quadrant of Nate, squalls moving onshore will have the potential for locally increased wind gusts as well as tornadoes. In addition, heavy rain will also be possible with rainfall amounts of 2-4 inches forecast.

Continued Thunderstorms for the Gulf Coast Sunday
Squalls associated with the outer bands of Tropical Storm Nate are forecast to continue to move onshore into Sunday. To the northeast of Nate, thunderstorms capable of strong wind gusts and tornadoes are expected. 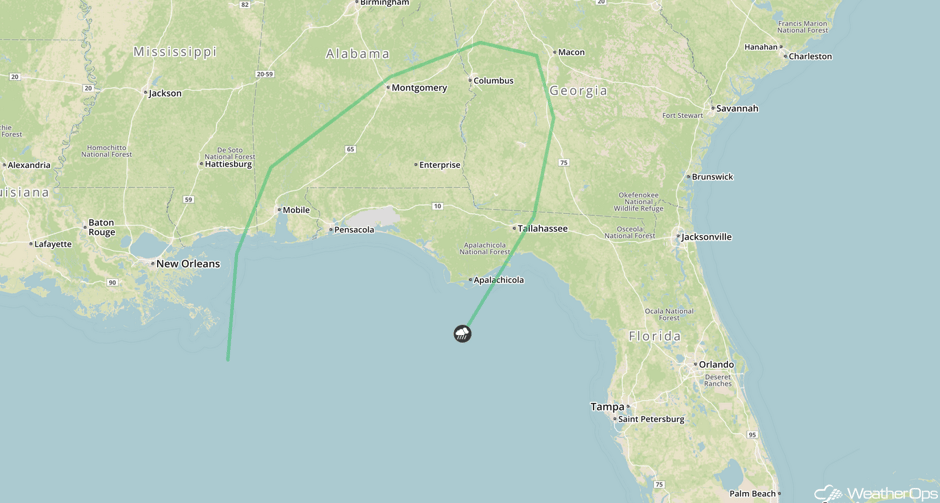 Excessive Rainfall Sunday for the Appalachians and Southeast
On Sunday, with the approach of a cold front combined with tropical moisture associated with Tropical Storm Nate moving onshore, excessive rainfall will be likely across portions of the Appalachians and the Southeast. Flash flooding and flooding will be of concern due to excessive accumulations. Rainfall accumulations of 3-4 inches with locally higher amounts in excess of 6 inches are expected. 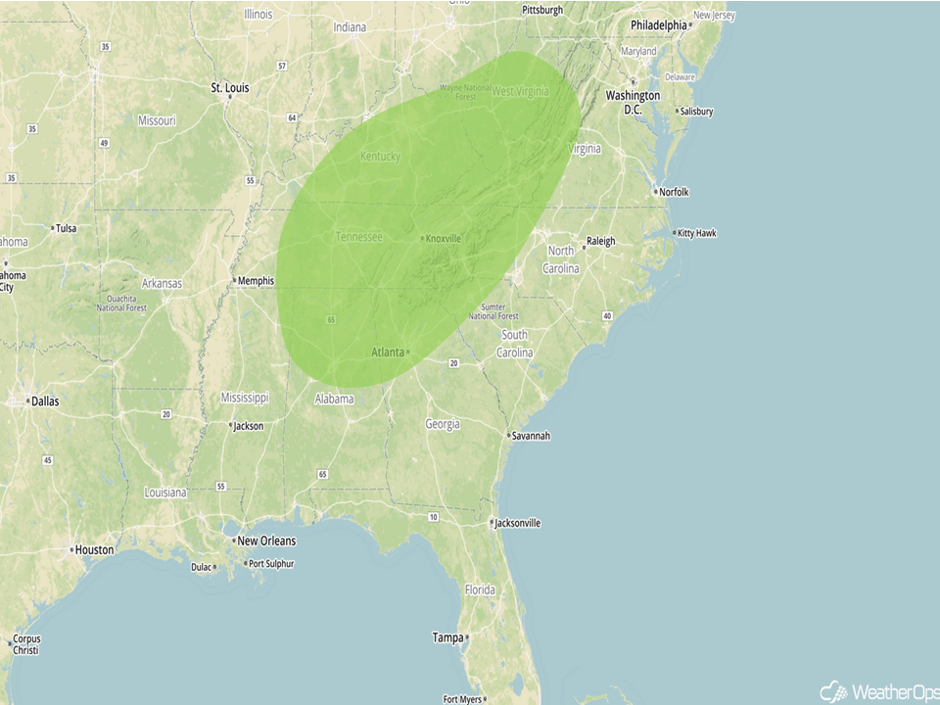 Tropical Update
Tropical Storm Nate (green oval) is 175 miles southeast of Cozumel, Mexico and is moving north-northwestward at 21 mph. Maximum sustained winds are at 50 mph with higher gusts. Nate is expected to remain on its current course through Saturday with a turn to the north and northeast Saturday night and Sunday. On the current forecast track, the center of Nate will move across the Caribbean today and near or over the northeastern coast of the Yucatan peninsula tonight. Nate will approach the northern Gulf Coast Saturday and move near or over the northern Gulf Coast Saturday night or Sunday. Additional strengthening is expected and Nate is expected to become a hurricane by the time it reaches the northern Gulf of Mexico.

As Nate begins to move into the Gulf of Mexico, winds will range 35-60 knots with gusts in excess of 70 knots in the outer bands with seas 16-20 feet. In addition, there will be a moderate risk of waterspouts. Closer to the center of Nate, winds will range 60-70 knots with gusts in excess of 85 knots. As Nate approaches the Gulf Coast, swells will be 20-25 feet in the deeper waters and 10-16 feet near the shore. By late Saturday, winds of 50-80 mph with gusts in excess of 95 mph and storm surge of 4-7 feet are expected in addition to squalls and coastal flooding. Storm surge may range 5-8 feet in some places. Rainfall amounts of 3-6 inches with locally higher amounts in excess of 8 inches are forecast. There will also be a moderate risk for tornadoes. Conditions should improve late Sunday morning into Sunday afternoon.

Elsewhere, a non-tropical area of low pressure (blue oval) is forecast to develop along a front about 800 miles southwest of the Azores on Saturday. The low may become sub-tropical or tropical and a cyclone could develop early next week. The low is expected to drift over the northeastern Atlantic over the next several days. 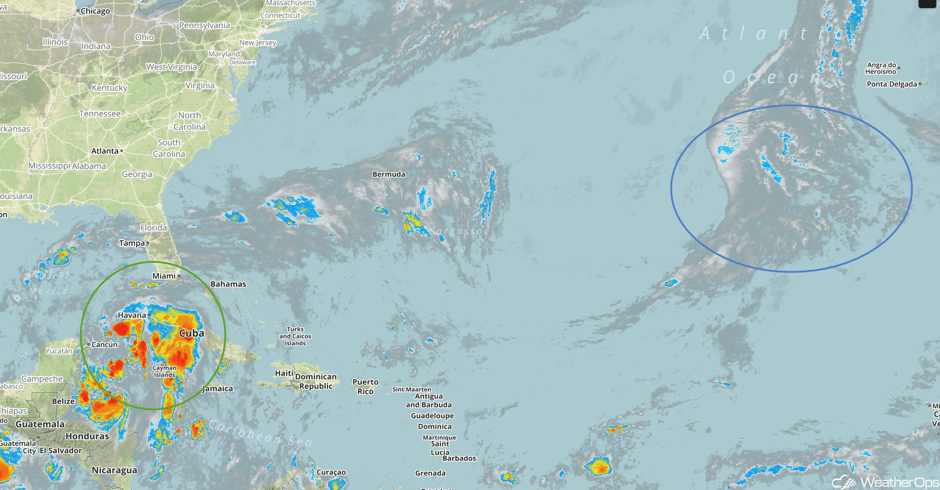 A Look Ahead
Heavy to excessive rainfall will move into the Ohio Valley on Monday as the remnants of Nate move northeastward. Accumulations of 1-2 inches with locally higher amounts in excess of 3 inches forecast. These remnants will linger across the Northeast on Tuesday.