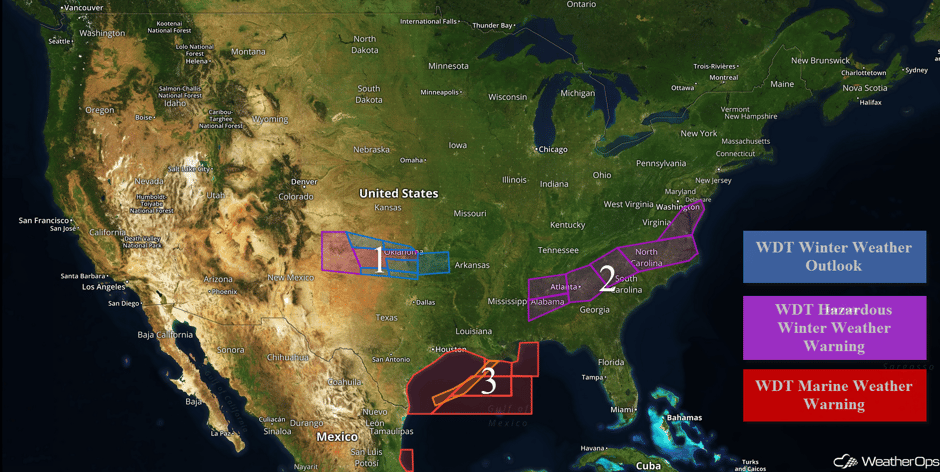 Region 1
Wintry precipitation will continue across Region 1, as an upper level low and cold front continue to move across the region. Total snowfall accumulations of 3-6 inches are forecast with locally higher amounts across western and central portions of the Texas Panhandle. Across eastern portions of the Texas Panhandle into central Oklahoma, snow accumulations of 2-4 inches with locally higher amounts in excess of 5 inches are expected. Winds of 10-15 mph and gusts in excess of 20 mph will allow wind chills to fall between 0 and 10 F. Heavy snow will also continue across portions of northern New Mexico, bringing two day snowfall totals to over a foot in the highest elevations.

It was a beautiful morning on the @okstate campus.
A little #snow makes everything better.#okwx pic.twitter.com/Gts8tPfqBW

Region 2
As a surface low develops to the south of Region 2, precipitation is forecast to develop to the north of the associated warm front. With temperatures at or below freezing at the surface, but warmer air aloft during the afternoon and early evening, precipitation is expected to fall as sleet across portions of Alabama. Freezing rain may also occur into Saturday morning before changing over to all snow. Snow accumulations of around half an inch are forecast. Further east into Georgia, sleet accumulations between a quarter and a half an inch in addition to snow accumulations of 2-4 inches with locally higher amounts in excess of 5 inches are expected. Into the Carolinas and Virginia, 3-5 inches with locally higher amounts in excess of 6 inches are forecast on Saturday. Where the heaviest snow falls, visibilities of less than a mile are likely.

Region 3
Elevated winds and seas are expected across Region 3 through Sunday ahead of a cold front. Across the northwestern Gulf of Mexico, winds of 25-32 knots with gusts in excess of 35 knots are expected. Near shore waves will be 6-9 feet with deeper water waves of 10-14 feet anticipated. By Friday evening winds will become northerly at 25-30 knots with gusts in excess of 40 knots across the central Gulf of Mexico. Seas will build to 10-14 feet through Sunday morning.

Significant Snowfall Possible across the Sierra Nevada Saturday and Sunday
A storm system moving ashore in California on Saturday will bring deep Pacific moisture into the region. Heavy snow will begin across the Sierra Nevada. Snowfall amounts of 8-10 inches with isolated higher amounts in excess of a foot are forecast on Saturday. This heavy snow will continue into Sunday with two day snowfall totals exceeding two feet on the highest peaks. 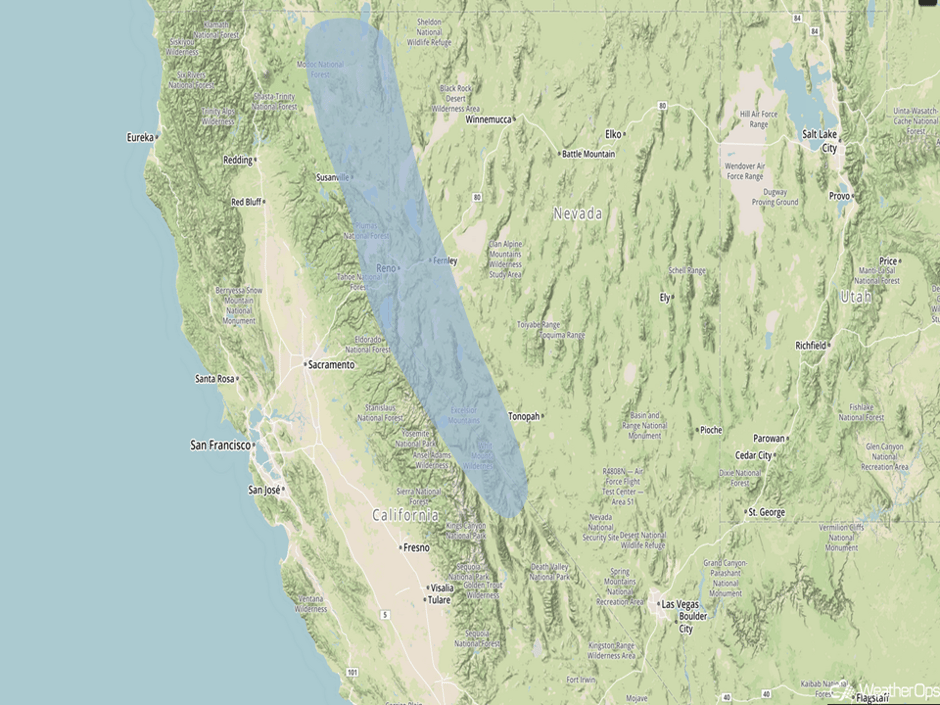 Excessive Rainfall Possible for northern California Saturday and Sunday
The same storm system bringing snow to the Sierra Nevada will bring excessive rainfall to the lower elevations of northern California Saturday and Sunday. Two day rainfall totals of 4-7 inches with isolated higher amounts in excess of 8 inches are forecast.

A Look Ahead
Heavy rain will continue for portions of Northern California on Monday. Rainfall amounts of 2-3 inches with locally higher amounts in excess of 4 inches will be possible. By this time, at least several inches of rainfall will have fallen in many locations in northern California, and flash flooding and mudslides will become serious issues.