A weak area of low pressure and plentiful moisture will allow for the development of thunderstorms across the Central Plains on Friday. Thunderstorms may also develop across the Northeast and Mid Atlantic on Friday as a cold front moves through the region. 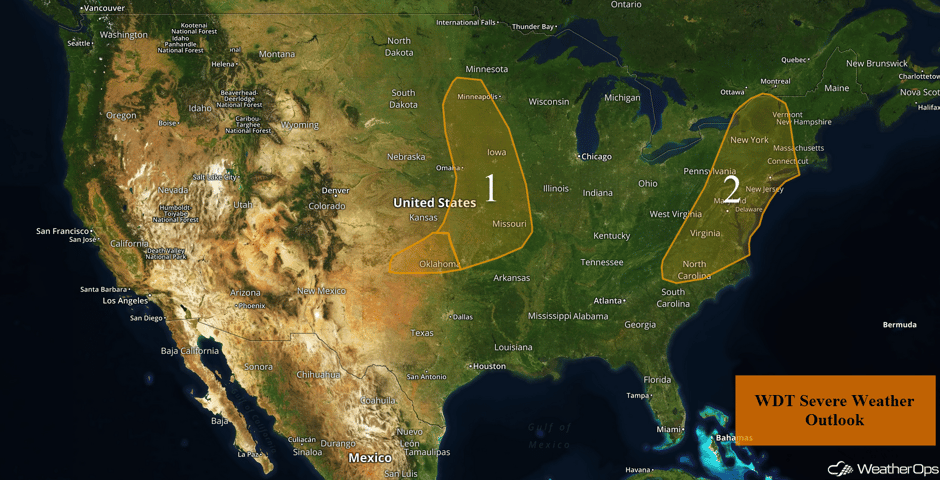 Thunderstorms for the Central Plains Friday
Early morning showers and thunderstorms have mostly dissipated. Although a few showers may remain, the overall risk for strong to severe thunderstorms is likely to remain fairly low late this morning through early afternoon. Late this afternoon and into the early evening, a few isolated strong storms may develop ahead of a weak cold front across southern Kansas. Additionally, outflow boundaries generated from this morning's storms may be a focus for further development. The lack of strong shear will limit the overall severe threat, but there will be a low risk for hail and damaging winds.

Further to the north and east, an upper level trough, a weak frontal boundary, and moderate instability will aid in the development of strong to severe thunderstorms this afternoon through evening. A few isolated severe storms may develop across far eastern Kansas, Iowa, and Missouri. Any strong storms that make it into northeast Oklahoma or western Arkansas will likely do so after midnight. Further north, the instability across Minnesota is a little more uncertain. However, strong to severe thunderstorms may redevelop by mid to late afternoon. Hail and damaging winds will be the primary hazards with these storms. 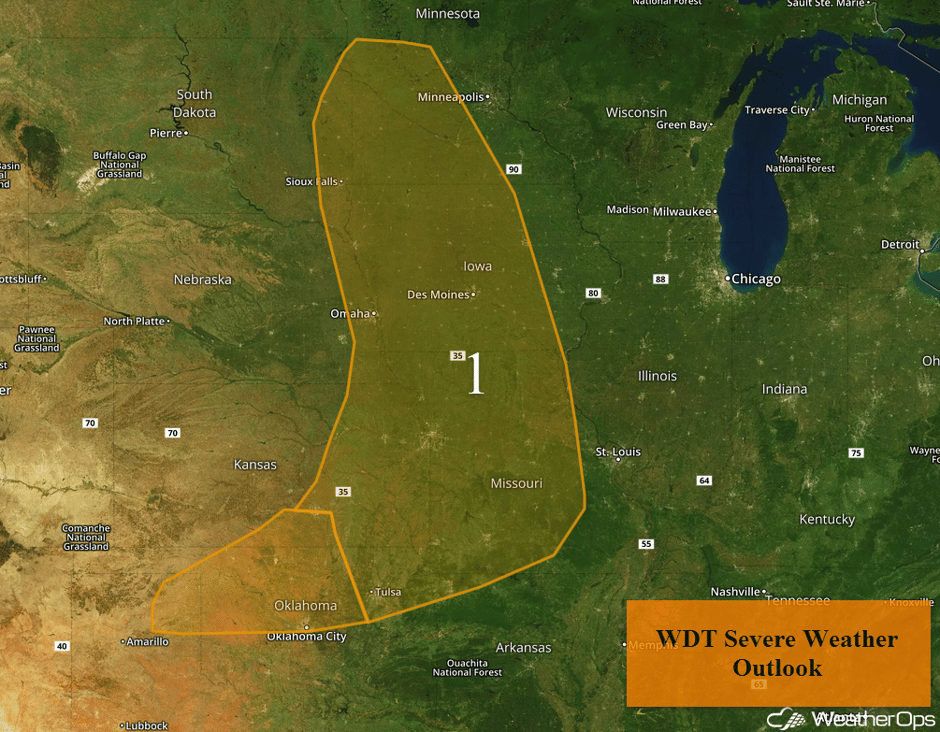 Potential for Thunderstorms Friday across the Northeast and Mid Atlantic
Scattered showers and embedded thunderstorms are underway from portions of Maine southward into Pennsylvania and West Virginia. This activity is in response to a warm front lifting northward through the region. Areas along the coast may receive frequent breaks between showers during the late morning and early afternoon before a cold front  arrives late this afternoon and early evening. Nonetheless, there is the potential for a few strong storms ahead of the front and primary line of storms that are anticipated later on. Farther west, ongoing showers and thunderstorms from central New York into West Virginia are expected to increase in intensity as they move eastward during the late morning and afternoon. Damaging winds will be the primary hazard with a lesser threat for large hail. 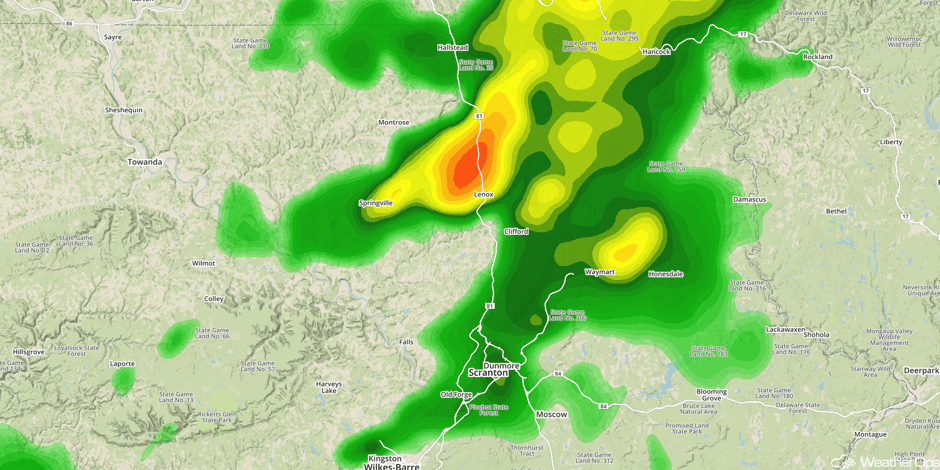 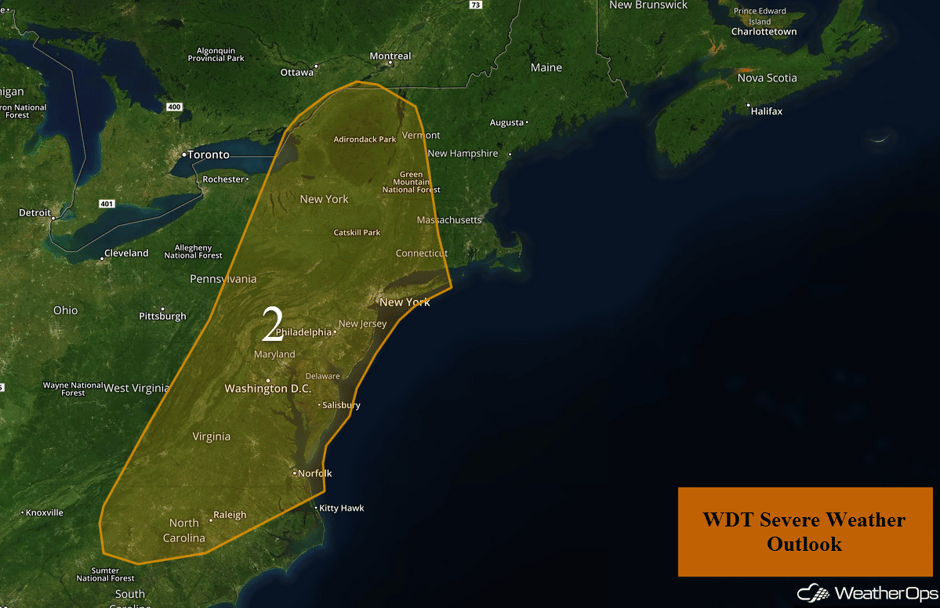 Risk for Thunderstorms across the Central Plains on Saturday
An area of low pressure should intensify into the Plains on Saturday, producing some strong to severe thunderstorms for the region. Storms should develop across the high terrain and move eastward through the afternoon. Large hail and damaging winds will be the primary hazards with these storms. 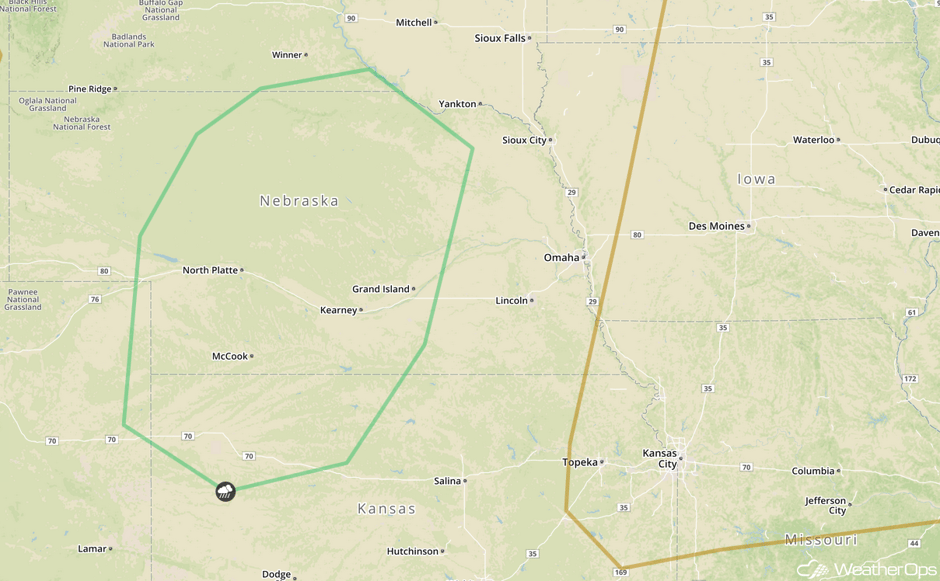 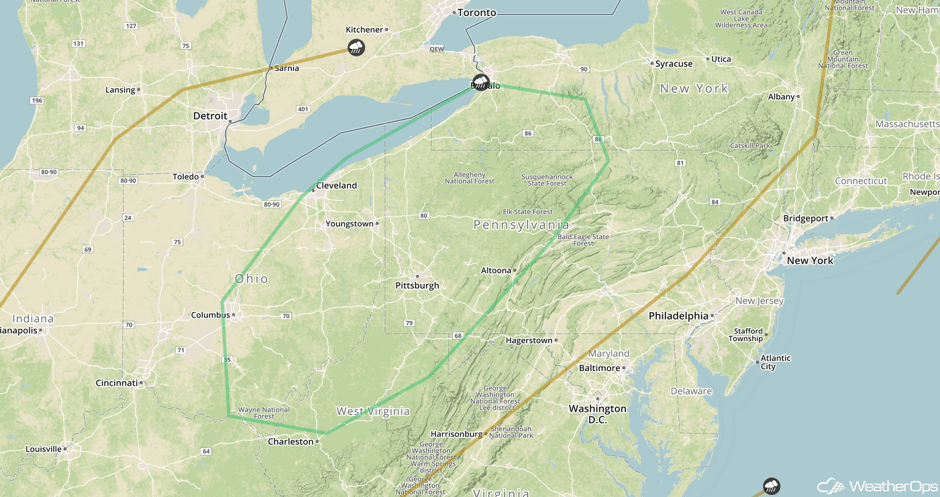 Excessive Rainfall for Portions of New Mexico and Texas on Saturday
Monsoonal moisture across the Southwestern US should produce showers and thunderstorms for New Mexico and Texas. Some storms may produce heavy rain with rainfall amounts of 1-2 inches forecast. 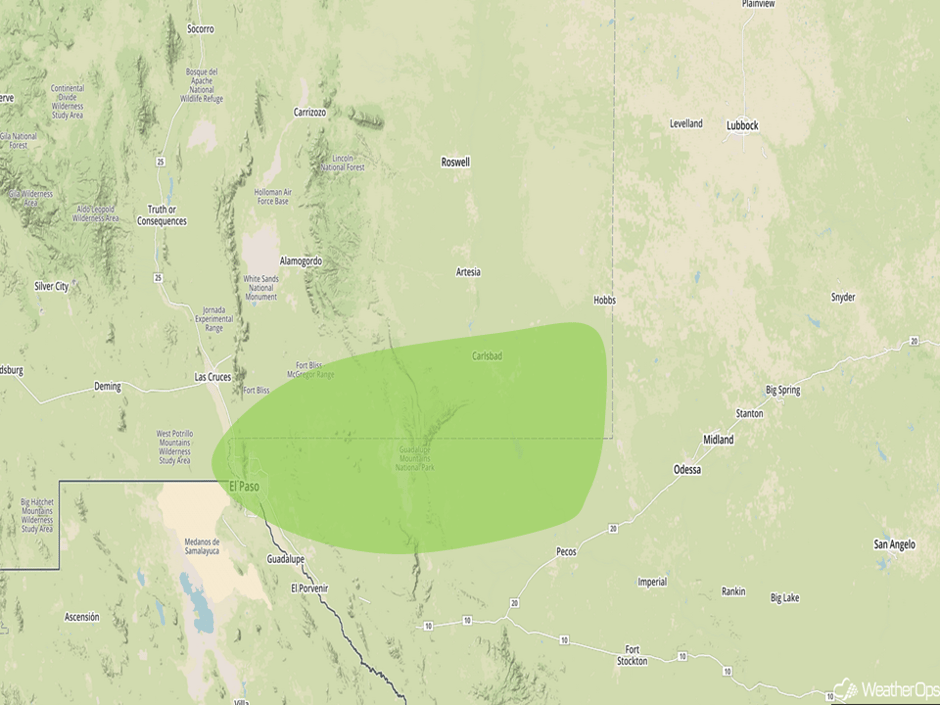 Risk for Thunderstorms Sunday across the North Central US
An area of low pressure should continue to develop across the Northern US on Sunday with a front draped through South Dakota. This front will provide a focus for thunderstorm development. Storms will have the potential to produce large hail and damaging winds as they move eastward. During the nighttime and overnight hours, storms will consolidate into a complex, with damaging winds becoming the primary hazard. In addition to the severe weather, heavy rainfall is also forecast. Rainfall amounts of 1-2 inches are expected. 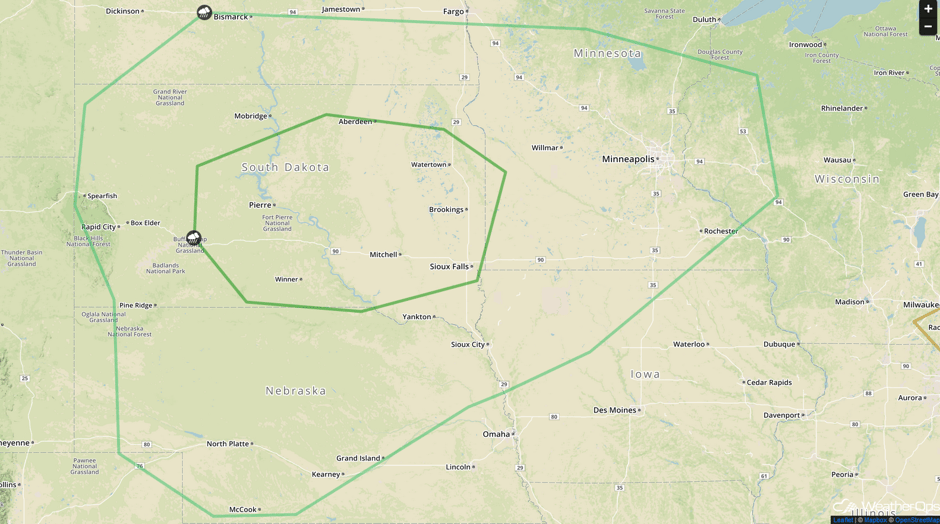 Heavy Rainfall for the Four Corners Region on Sunday
Monsoonal thunderstorms will continue for the Southwestern US on Sunday, with moderate to heavy rainfall likely for the region. Overall precipitation amounts are not forecast to be excessive, but isolated areas exceeding 1-1.5 inches in heavy downpours are expected. 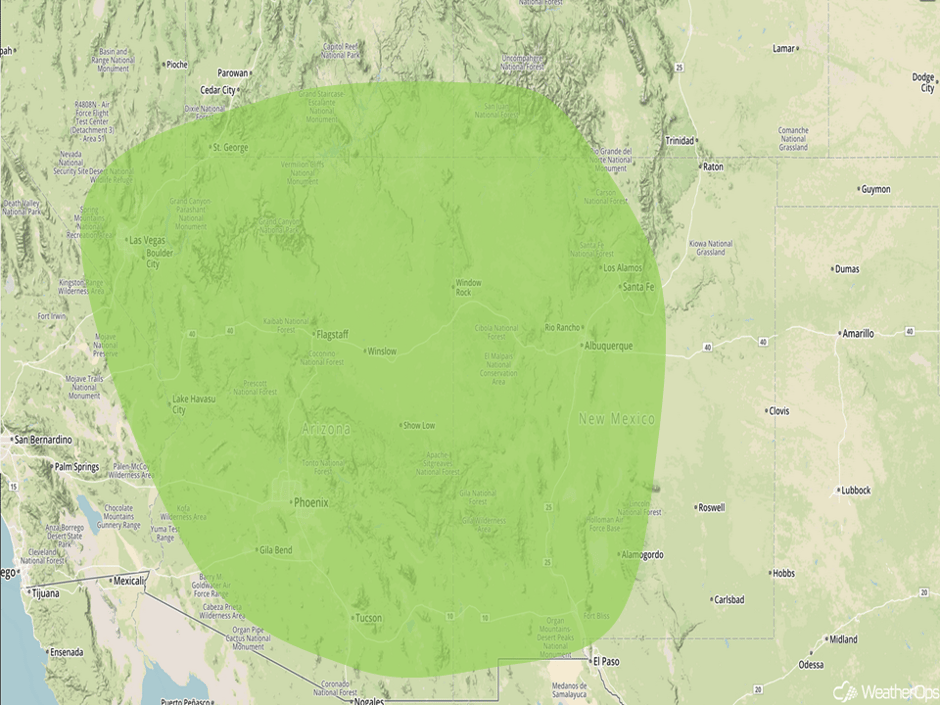 Tropical Update
Tropical Storm Harvey (green oval) is currently moving through the Windward Islands. The general motion is toward the west at 21 mph and is expected to continue over the next few days. Sustained winds are at 40 mph with higher gusts.

Further east, shower and thunderstorm activity associated with an area of low pressure 750 miles east-northeast of the Leeward Islands (blue oval) continues to show signs of organization. Upper level conditions are becoming less favorable for development, however. The low is expected to move west-northwestward at 20 mph over the next few days.

Shower activity has increased over the last 24 hours over the far eastern Atlantic Ocean, several hundred miles west-southwest of the Cabo Verde Islands (red oval). Environmental conditions are expected to become more favorable for development early next week while the system continues to move west-northwestward to northwestward at 20 mph.

A Look Ahead
An area of low pressure will develop across the North Central US on Monday and move toward the Great Lakes through the day. Thunderstorms ongoing overnight from Sunday combined with new development are expected to produce plentiful precipitation and very heavy rainfall totals. Accumulations will average 1-2 inches with localized amounts exceeding 2.5 inches.