Severe thunderstorms and flooding are expected Friday from the Southern Plains into the Ohio Valley as a warm front lifts northward. 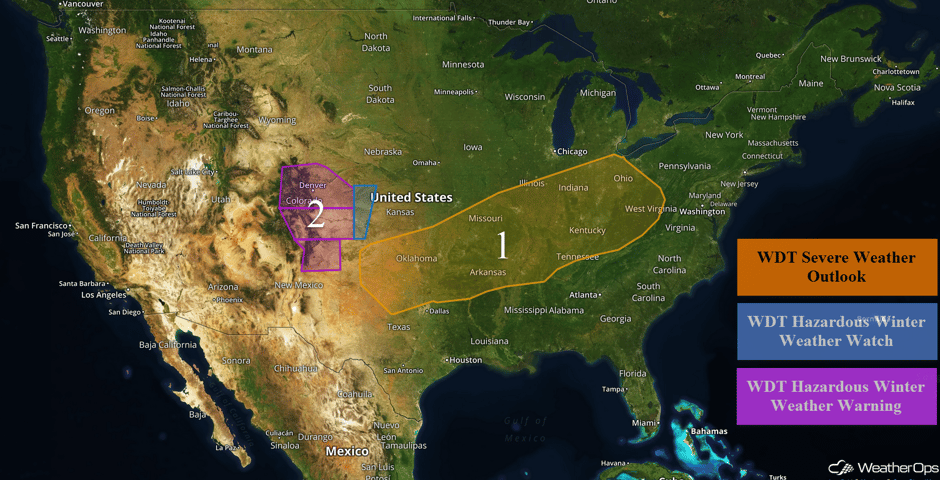 Severe Thunderstorms and Flooding Expected from the Southern Plains into the Ohio Valley on Friday
A complex upper level system, along with multiple surface boundaries, will lead to widespread thunderstorms across the region today and/or tonight. Some thunderstorms are currently ongoing across southwestern Missouri and additional storms are forecast to develop across the Ohio and Tennessee Valleys this afternoon and evening. Some isolated thunderstorms may develop this afternoon over southern Oklahoma, northern Texas, and northwestern Arkansas, After sunset, new thunderstorm development is expected across much of Oklahoma and adjacent portions of the Southern Plains. Conditions are expected to be favorable for severe thunderstorms beginning this afternoon and continuing into the overnight hours. Due to the complex setup, there is a good deal of uncertainty in regard to timing and impacts. Large hail, damaging winds, and tornadoes will all be potential hazards with these storms.

In addition to the severe thunderstorms, heavy rain will also be a concern. The heaviest rain will fall from east central Oklahoma across northern Arkansas into southern Missouri. Here, 1-3 inches of rain are expected with locally higher amounts in excess of 4 inches. This will fall on ground that has received rainfall recently, increasing the flooding threat. A period of heavy rainfall will extend over the weekend over many parts of east Texas, eastern Oklahoma, Arkansas, Missouri, and into Indiana and Illinois. 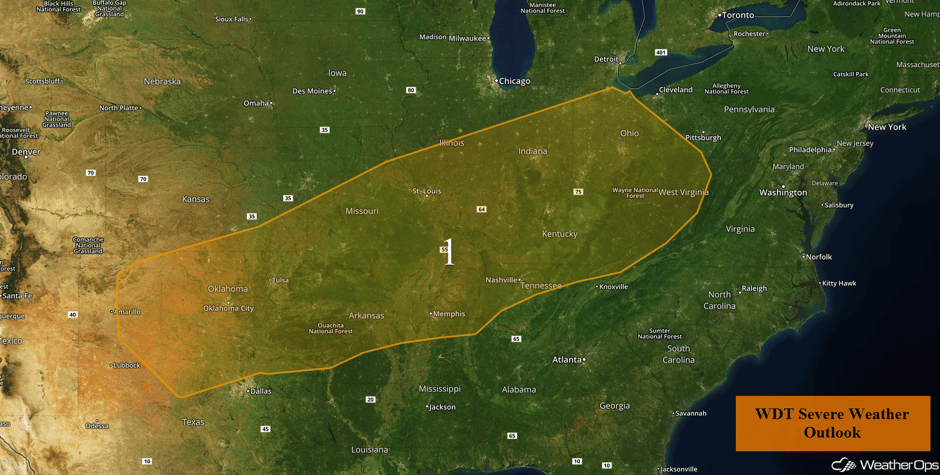 Significant Snowfall for Colorado and Western Kansas on Saturday
A late season snow event is likely for portions of Colorado and New Mexico into western Kansas this weekend. High elevations could see up to a foot or more of new snow, especially on the east-facing slopes. At lower elevations, 4-6 inches with locally higher amounts in excess of 8 inches are expected. Winds will be northerly at 20-30 mph with higher gusts. This could cause reductions in visibility. Snow should begin from the north late Friday night and then move into the northeast plains during the early morning. Snow should continue through Saturday night before ending early Sunday morning. 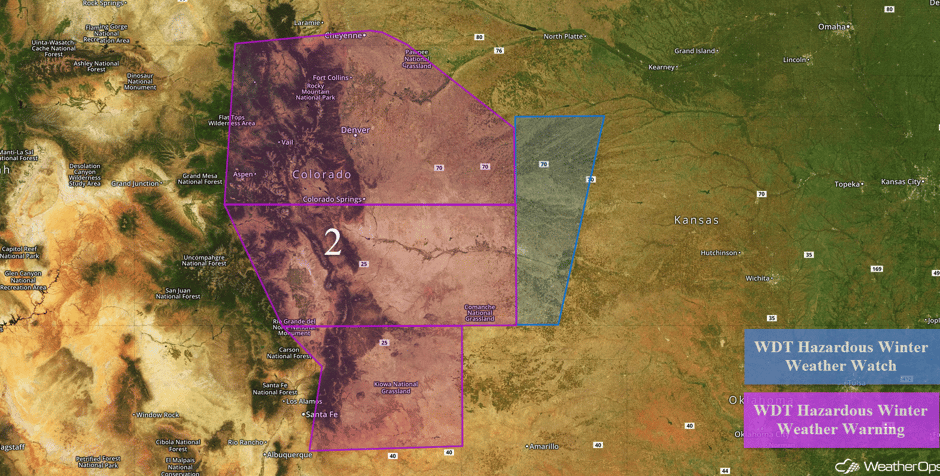 Severe Thunderstorms and Flooding Expected Saturday from East Texas to Central Arkansas
The threat for severe weather continues on Saturday from east Texas and Oklahoma northeastward all the way into the Mid-Atlantic states. Storms should be ongoing in the morning, with the greatest threat in the morning hours along and north of the warm front. Later in the day, as the cold front moves eastward, additional thunderstorms should develop from north central Arkansas southwestward into eastern Texas. Large hail and damaging winds will be the initial threat with these storms, shifting to damaging winds as storms grow into clusters. Other storms may develop from the Mid Mississippi Valley with large hail the primary hazard.

In addition to the severe weather, flash flooding will continue to be a major concern across much of the threat region on Saturday. Rainfall amounts of 4-6 inches with locally higher amounts in excess of 7 inches are expected, mainly from northwestern Arkansas, through east central Missouri, and into Indiana. Many areas will be receiving several rounds of thunderstorms that started on Friday, making two day rainfall totals over 8 inches possible in some areas, especially the Ozarks. Rainfall accumulations of a few inches will be more common. Flash flooding is almost a certainty, and river flooding may even become a problem. 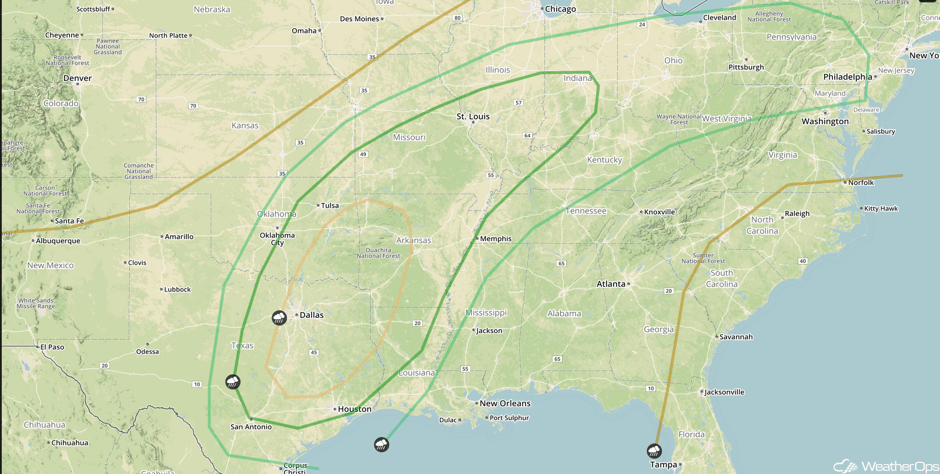 Strong to Severe Thunderstorms Possible Sunday for Portions of the Mississippi Valley and Midwest
An area of low pressure will slowly move out of the Plains and continue to strengthen on Sunday, with the attendant cold front also moving eastward. Severe weather will likely be ongoing from Saturday night and will move into western portions of the region during the morning. Later in the day, as daytime heating destabilizes the atmosphere, new storms will develop with the primary threats being large hail and damaging winds, along with an isolated tornado or two. These storms will develop during the afternoon and continue into the evening.

Heavy rainfall will continue as well across the threat region. The heaviest rainfall is expected from southern Mississippi, northward across western Tennessee and into southeastern Illinois and western Indiana. Rainfall amounts of 1-3 inches with locally higher amounts in excess of 4 inches are expected. Flooding issues are likely to continue through Sunday. 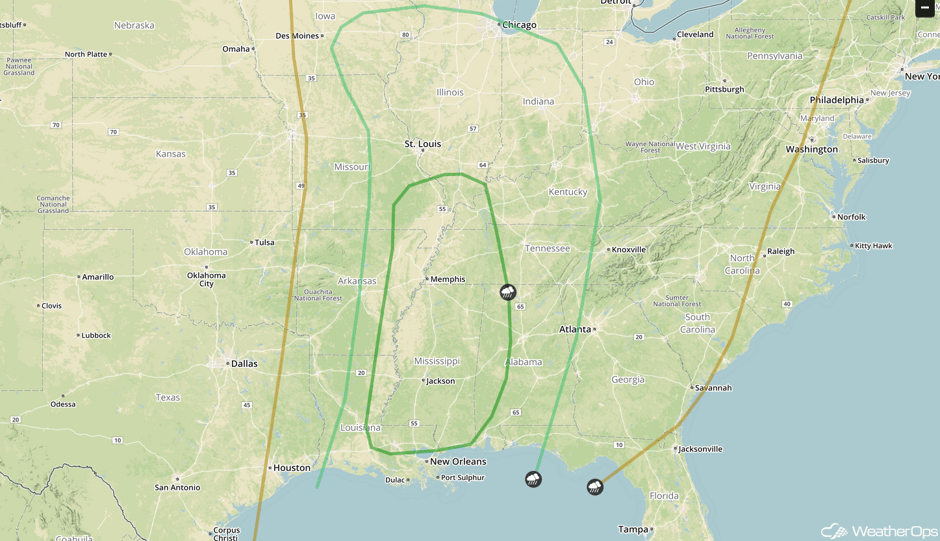 A Look Ahead
Heavy rain will move into the Northern Plains on Monday as an area of low pressure continues to move northeastward. Rainfall accumulations of 1-2 inches will be possible. Behind this low, snow may develop from eastern Colorado northeastward into central Nebraska and the Upper Mississippi Valley. Rain will move into the Northeast on Tuesday. An area of low pressure will develop over Texas on Wednesday and move eastward on Thursday, bringing the potential for severe weather to portions of the lower Mississippi Valley.