Thunderstorms with the potential for large hail, damaging winds, tornadoes, and heavy rainfall are expected Friday from the Missouri Valley southward into east Texas and the Lower Mississippi Valley in association with a strong area of low pressure. Snow will continue for the Central and Northern Plains into the Upper Midwest through Saturday as an area of low pressure continues to move eastward across the region. Elevated winds and seas are expected for the western Gulf of Mexico through Saturday. 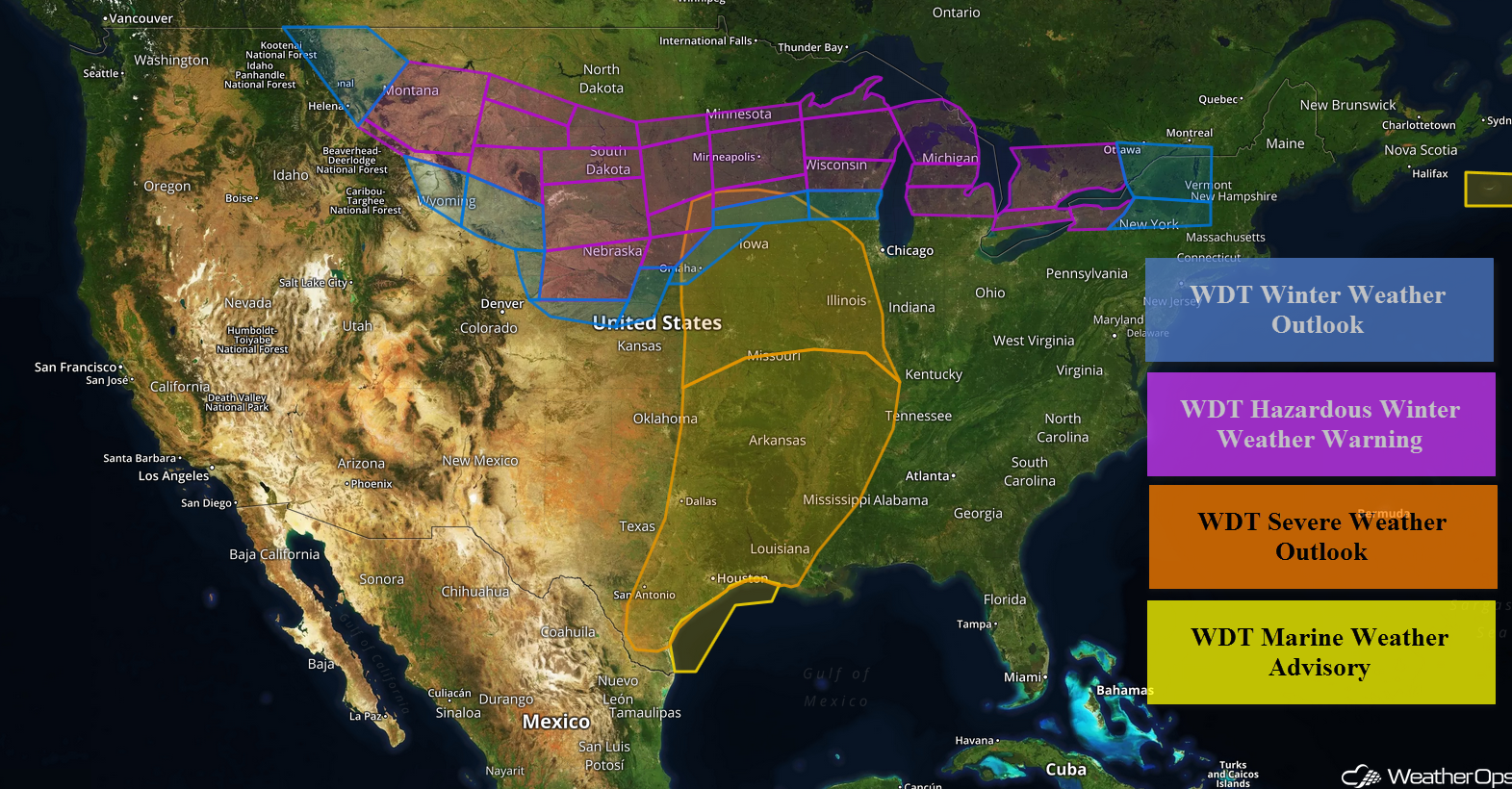 Thunderstorms from the Missouri Valley southward to East Texas and the Lower Mississippi Valley Friday
A strong springtime low will develop across the North-central Plains while an associated cold front will extend south into central Texas this afternoon. Ahead of the low and frontal boundary, rich Gulf moisture will surge northward all the way into southern Iowa. Meanwhile, strengthening southwest winds in the upper levels of the atmosphere will result in storm development late this afternoon and this evening. Heavy rain, frequent lightning, damaging winds, and even tornadoes are forecast. Furthermore, the storm threat will increase this evening and overnight from Arkansas southward as low level winds intensify. An enhanced threat of damaging wind gusts and isolated tornadoes will exist within bowing squall line segments that will race eastward across the lower Mississippi Valley. One or two strong tornadoes may unfold across Arkansas, northern Louisiana, and the immediate vicinity. 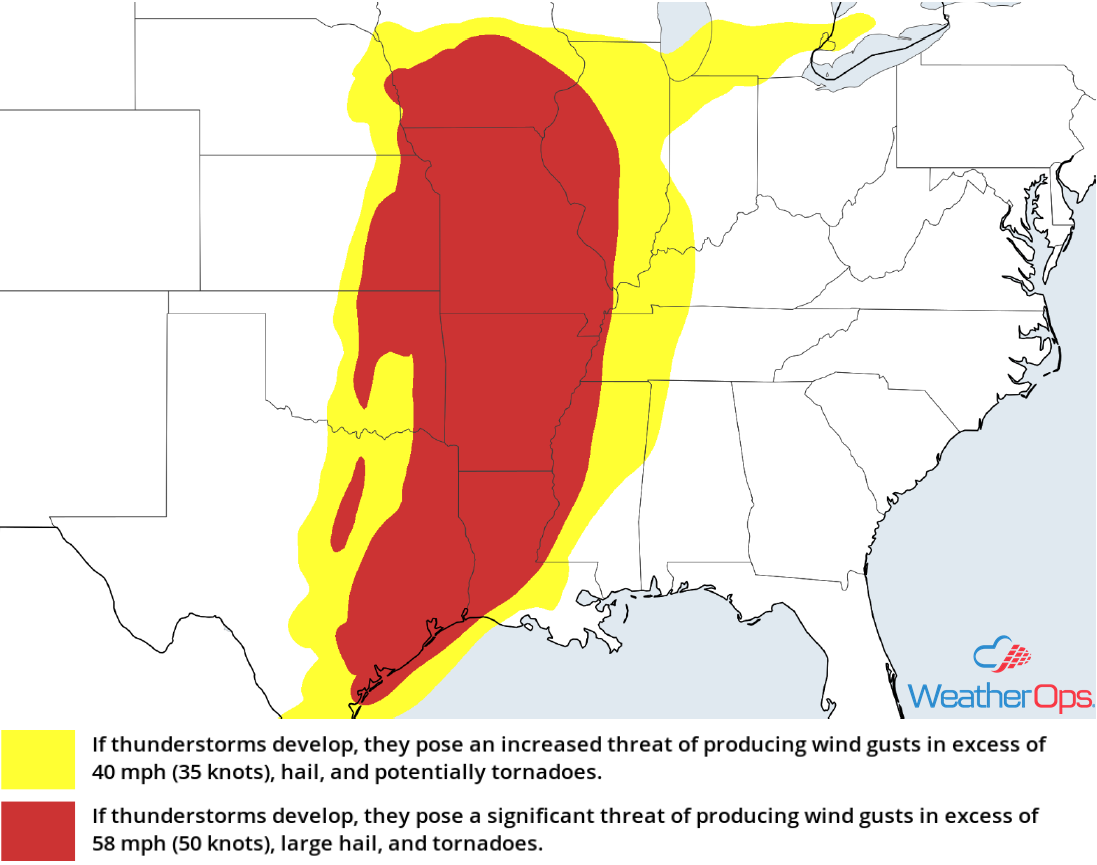 Excessive Rainfall Friday for the Mid and Lower Mississippi Valley
In addition to the thunderstorm potential described above, there will be the risk for excessive rainfall. Rainfall accumulations of 2-3 inches with locally higher amounts in excess of 5 inches are forecast, leading to the potential for flash flooding. 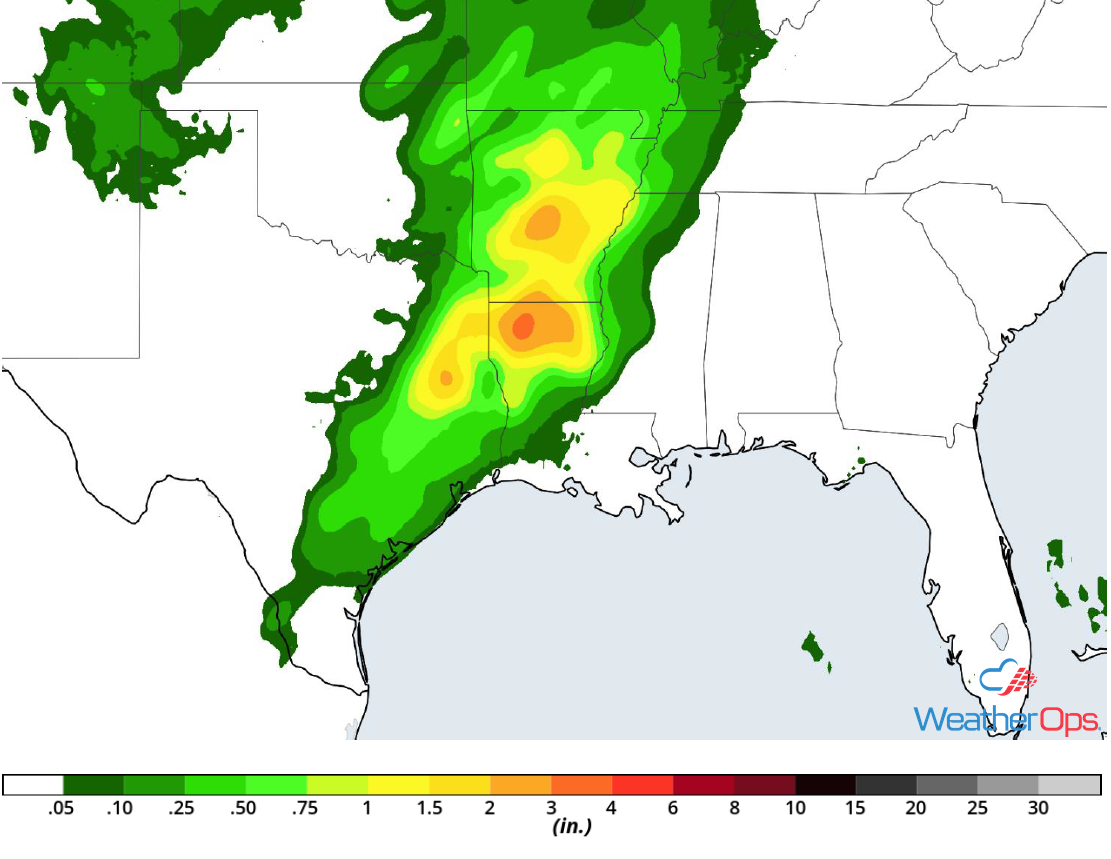 Snow Continuing for the Central and Northern Plains into the Upper Midwest through Saturday
A significant round of snow associated with a late season winter storm is underway across portions of the western Dakotas. Blizzard conditions will rapidly develop across much of the north-central Plains today. Significant snow and ice accumulation will also spread between southern/central Minnesota and central/northern Michigan from mid-morning through tonight. By tomorrow morning, blizzard conditions will still be present across portions of the Plains all the while significant amounts of snow and ice will begin to accumulate more rapidly across the Great Lakes. Snow accumulations of 8-12 inches are expected from Nebraska into Wisconsin with locally higher amounts in excess of 15-18 inches of snow. Ice accumulations will range 0.10-0.25 inch. 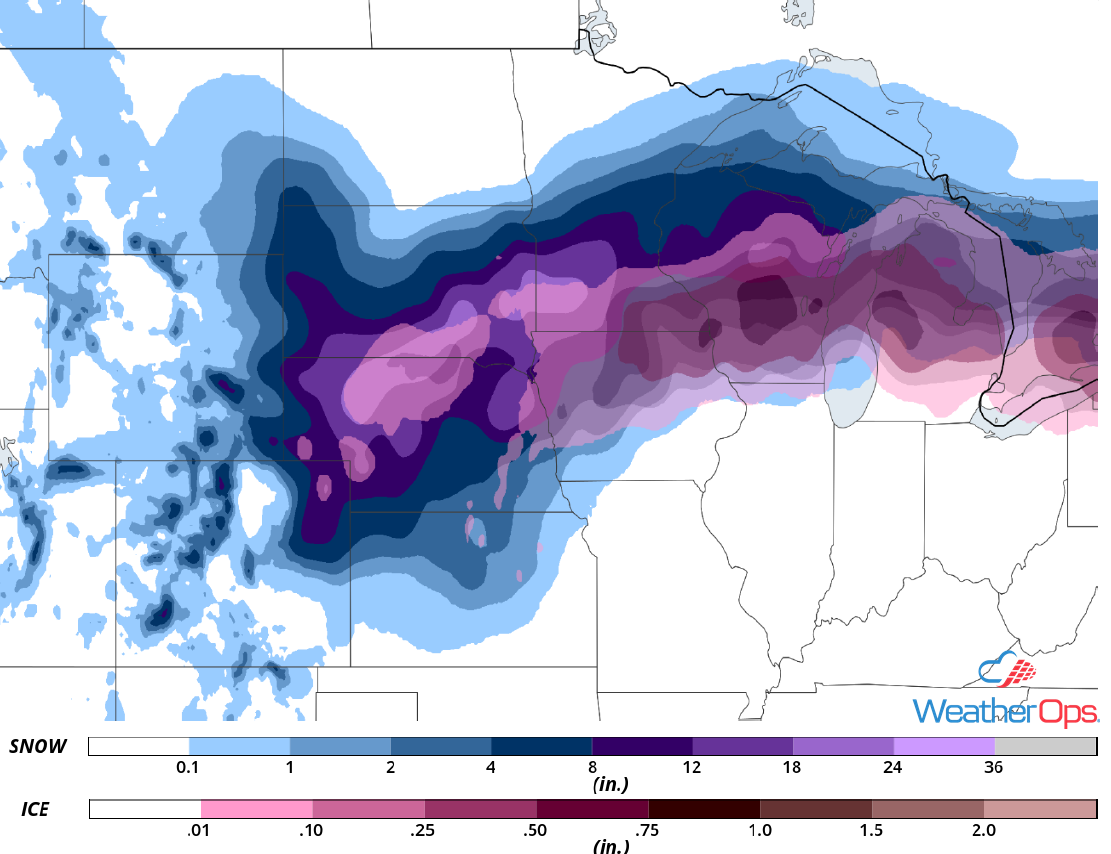 Elevated Winds and Seas Friday through Saturday Afternoon for the Gulf of Mexico
Elevated winds and seas are expected for the Gulf of Mexico from Friday morning into Monday afternoon. Across western areas, winds will range 25-35 knots with gusts in excess of 45 knots. In addition, seas will range 7-9 feet through Saturday night. Thunderstorms will likely develop with wind gusts in excess of 60 knots the primary hazard.

Freezing Rain for Upstate New York and New England Saturday through Monday
Rain will begin as early as late Friday night as an area of low pressure moves into the region. As temperatures fall Saturday morning, temperatures aloft will remain above freezing. This will allow for the potential for freezing rain, Accumulations will range 0.15-0.25 inch. In addition, some sleet may mix in as well. By late Sunday afternoon, the potential for freezing rain will move into northern portions of New York and Vermont. Ice accumulations will range 0.10-0.15 inch with locally higher amounts in excess of 0.25 inch. 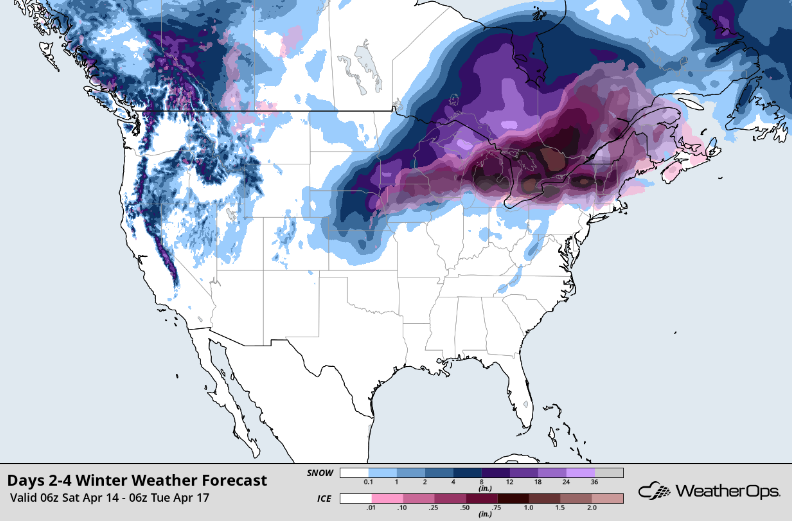 Potential for Thunderstorms Saturday from the Upper Midwest to the Gulf Coast
On Saturday morning, a squall line is likely to be ongoing out ahead of a cold front from southern Illinois southward into central Louisiana. This line will be capable of producing damaging winds and brief tornadoes. With the help of daytime heating, further atmospheric destabilization may result in the re-intensification of storms as they continue farther east during the afternoon. The threat of damaging winds and rain-wrapped tornadoes will be maximized from north-central Mississippi and Alabama southward to the Gulf Coast Saturday afternoon and evening. A marginal threat of strong storms will slide farther east into the eastern third of the threat area including, but not limited to eastern Kentucky and western Georgia Saturday night.

Excessive Rainfall from the Ohio Valley to the Gulf Coast on Saturday
Heavy, slow-moving thunderstorms will continue out ahead of a slow-moving cold front on Saturday. Moreover, one wave of heavy rain may move through northern Mississippi, Tennessee, and Kentucky during the early morning hours followed by another wave during the late afternoon and evening. Widespread 24 hour rain totals in excess of 1-3 inches are forecast with the potential for 3 to 4+ inch amounts within the northern Mississippi-Kentucky corridor mentioned earlier. Isolated pockets of flash flooding are likely. 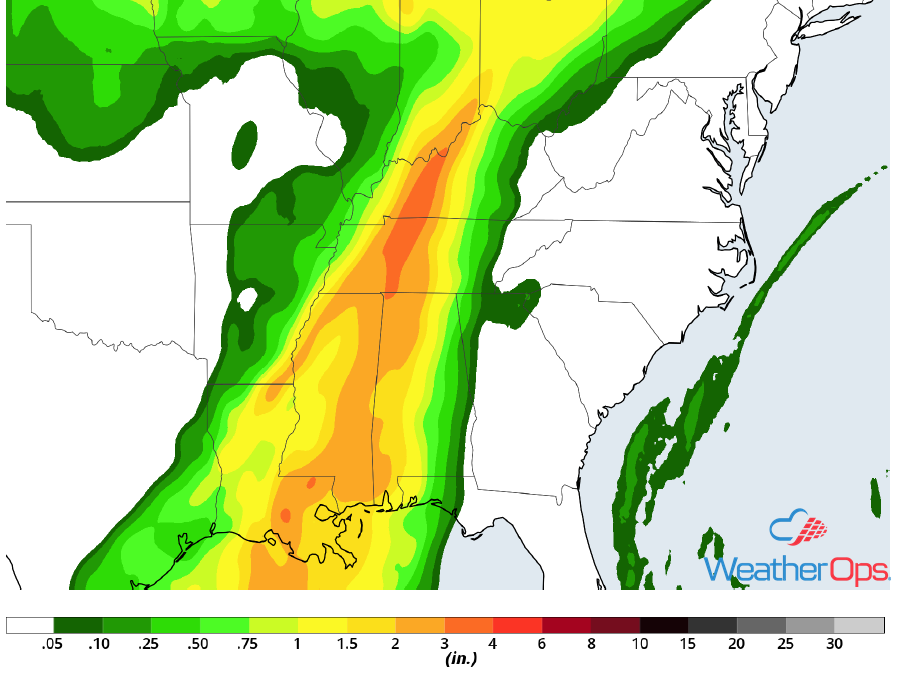 Thunderstorms Sunday from Virginia through Florida
An unusually significant dip in the jet stream will extend well into the Southeast US resulting in sustained support for a strong low pressure system and trailing cold front to progress eastward from the Mid-Atlantic States southward through the Florida peninsula on Sunday. Adequate amounts of instability and directional wind shear will be supportive of a squall line. This line is likely to contain damaging winds. A few brief tornadoes may also exist within the line. Additionally, the aforementioned dip in the jet stream will support cooler than normal temperatures in the mid to upper levels of the atmosphere thus resulting in a greater threat of larger hail than one would usually anticipate this far south and east. 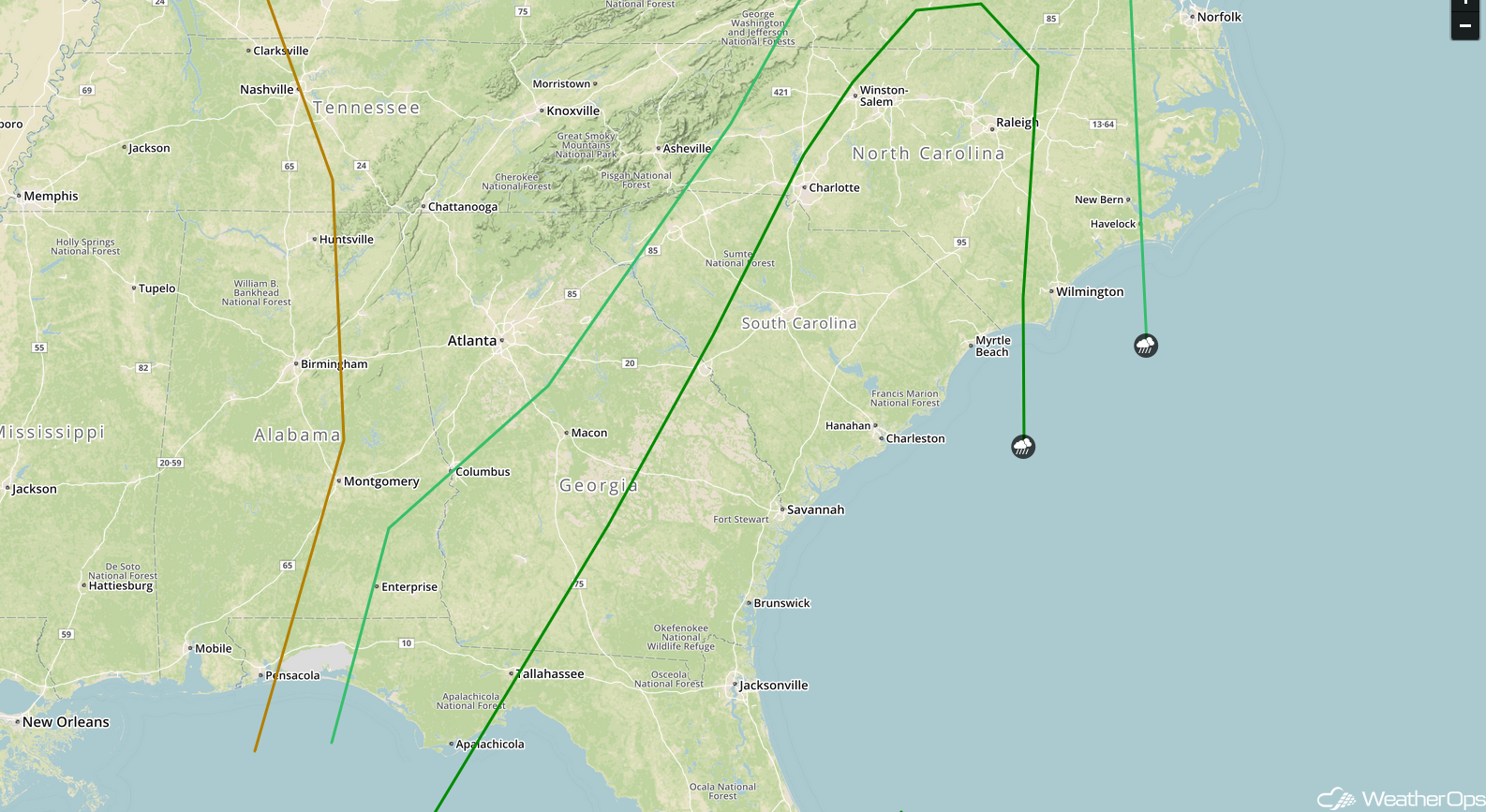 Excessive Rainfall from the Ohio Valley into the Southeast on Sunday
An extremely slow-moving cold front will finally reach locations spanning from the Ohio River Valley southward through northern Florida on Sunday. An abundance of low to mid-level moisture out ahead of the boundary will promote heavy showers and thunderstorms. Rainfall rates may exceed one inch per hour within the peak of storm activity. Widespread 24 hour rain totals of 1-3 inches are forecast. Isolated rain totals may exceed 3 inches especially from the Appalachian region of eastern Tennessee and western North Carolina northward into Ohio and Pennsylvania. 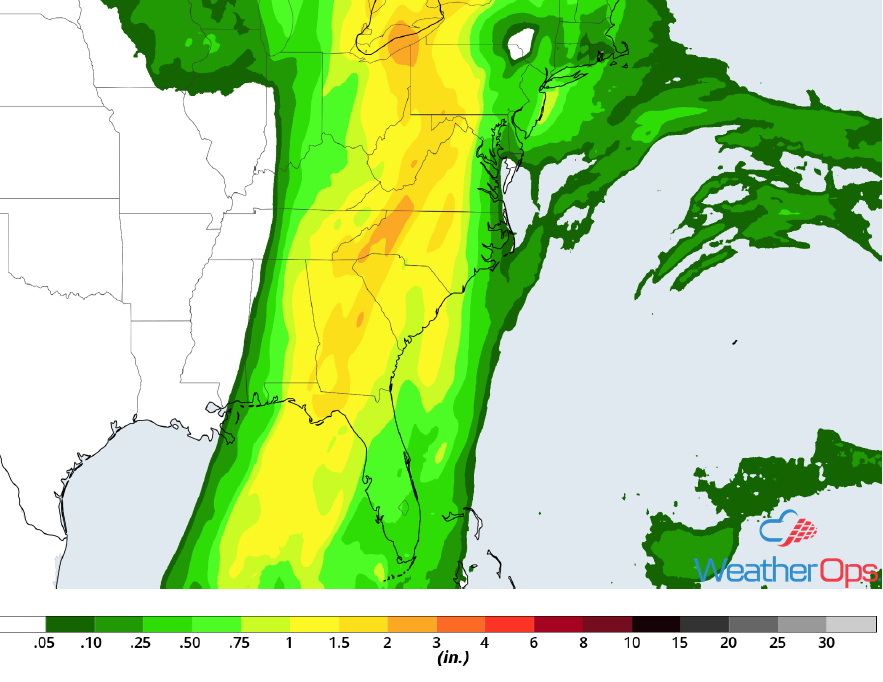 A Look Ahead
Light snow will continue across the Northeast through Wednesday as an area of low pressure moves out of the region. Another system may bring some light snow to the Northern Plains, Upper Midwest, and Great Lakes Tuesday into Wednesday.