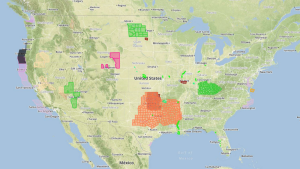 Northern Plains/Upper Midwest: A strong disturbance advancing eastward into this region
will result in the potential for strong to severe thunderstorm development across the
Northern Plains and eventually into the Upper Midwest later today. Severe winds and hail
will be the primary concerns although one or two tornadoes cannot be ruled out. There
remains some uncertainty regarding the eventual coverage of thunderstorm activity today.

Southeast: Deepening low pressure moving across Kentucky today will result in at least
scattered thunderstorm develop across the region. Widespread severe weather is not
forecast but several storms may become strong to severe through the course of the day
with hail and damaging winds the primary severe weather concern.

Lower Ohio Valley into the Central Appalachians: Deepening low pressure will move
slowly across Kentucky today. As a result scattered to numerous showers and
thunderstorms are expected across Kentucky and portions of adjacent states. Conditions
will be favorable for heavy rain with localized amounts exceeding 2 inches resulting in a
threat for flash flooding. 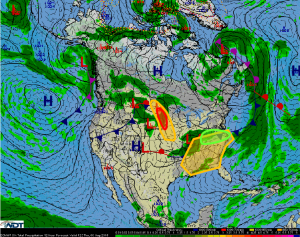