Northeast & Mid-Atlantic:An upper level trough combined with a cold front at the surface will move eastward into the Northeast and Mid-Atlantic regions today. Thunderstorms are forecast to develop and intensify across this region during the afternoon and early evening hours. Conditions are not favorable for widespread severe storms, but some strong to marginally severe storms will be possible. Gusty winds and hail will be the main threats.

Southern Plains:A wave of low pressure developing along a nearly stationary frontal boundary will bring a continued threat of heavy rainfall to portions of the Southern Plains today. Thunderstorms currently ongoing across the region will likely increase in coverage later today. Additional rainfall amounts of 1-2 inches, isolated 4+ inches, will be possible for many locations. This will lead to an increased threat of flooding and flash flooding, especially for locations that received heavy rainfall on Monday. In addition to the rainfall, a few strong storms capable of producing gusty winds in excess of 40 mph will also be possible. 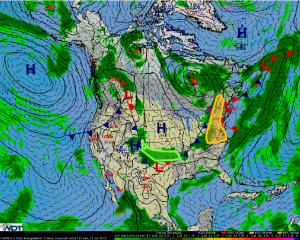