Many Have Had Their First Freeze and Snowfall. If You Haven't, Here's When You Will.

With the pattern turning cold enough at the end of October to produce widespread frosts and freezes, it is an excellent time to look at when the average first freeze occurs across the country. Once frost begins to show up, the first snowfall will soon follow.

The map below from the Midwest Regional Climate Center shows the median date for the first freeze across regions throughout the country. Across the Dakotas, Minnesota, northern Wisconsin and northern New England, the first freeze of the season is usually seen during the second half of September. Areas from Kansas to the Ohio Valley typically see the first freeze occur during the middle to late October, while the first freeze doesn’t usually happen across most of Texas and the Gulf Coast until November or even December in some years. Also notice that while much of the Appalachians frequently see a freeze during October, the immediate East Coast as far north as New York City doesn’t see a freeze until November, on average. 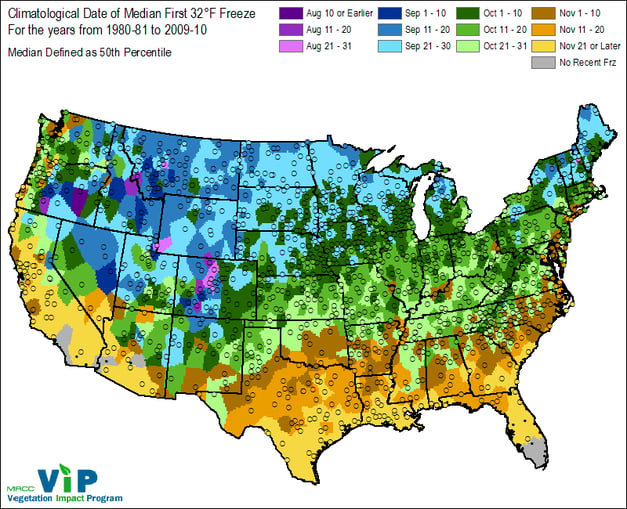 With many areas now seeing (or about to see) frost for the first time this season, snow can’t be far behind. The following map shows the average dates of the first snowfall of the season. Since snowstorms impact much smaller regions than do cold air masses, the timing of the first snow often varies wildly from year to year in a given location. On average, areas across the Rockies and High Plains usually see the first snowfall occur during September or early October, while areas like the Ohio Valley and Mid-Atlantic don’t typically see snow happen until the end of October or during November. Snowfall is rare in the southern US before December, and of course, areas along the immediate Gulf Coast and across Florida don’t even see snow in most years.

While it has been a warmer than normal fall season thus far, colder air is finally moving in. Are you prepared for the return of cold weather and snow? Get more maps and forecasts for winter from Frontier Weather.