It's a tropically active time in both the Atlantic And Eastern North Pacific Basins. There are currently two hurricanes approaching the Hawaiian Islands and two tropical depressions near the Contiguous US. Here's a current update on what is going on.

There has been some confusion in the news lately. Looking at the tweet below, it is obvious that some people are very unsure of what is going on. Hurricane Gaston is not in the Gulf and will not threaten the US in any way. Also, it is called the Florida Straits, not "Straights".

The Daily Mail isn't the only news agency issuing misleading information. USA Today and NBC Nightly News also released tweets over the weekend that either misrepresented the situation or got Hurricane Gaston confused with Tropical Depression 9 (formerly called 99L). The lesson here is to know your source. Don't believe just anyone who is posting or tweeting weather information. WeatherOps is a trusted source. 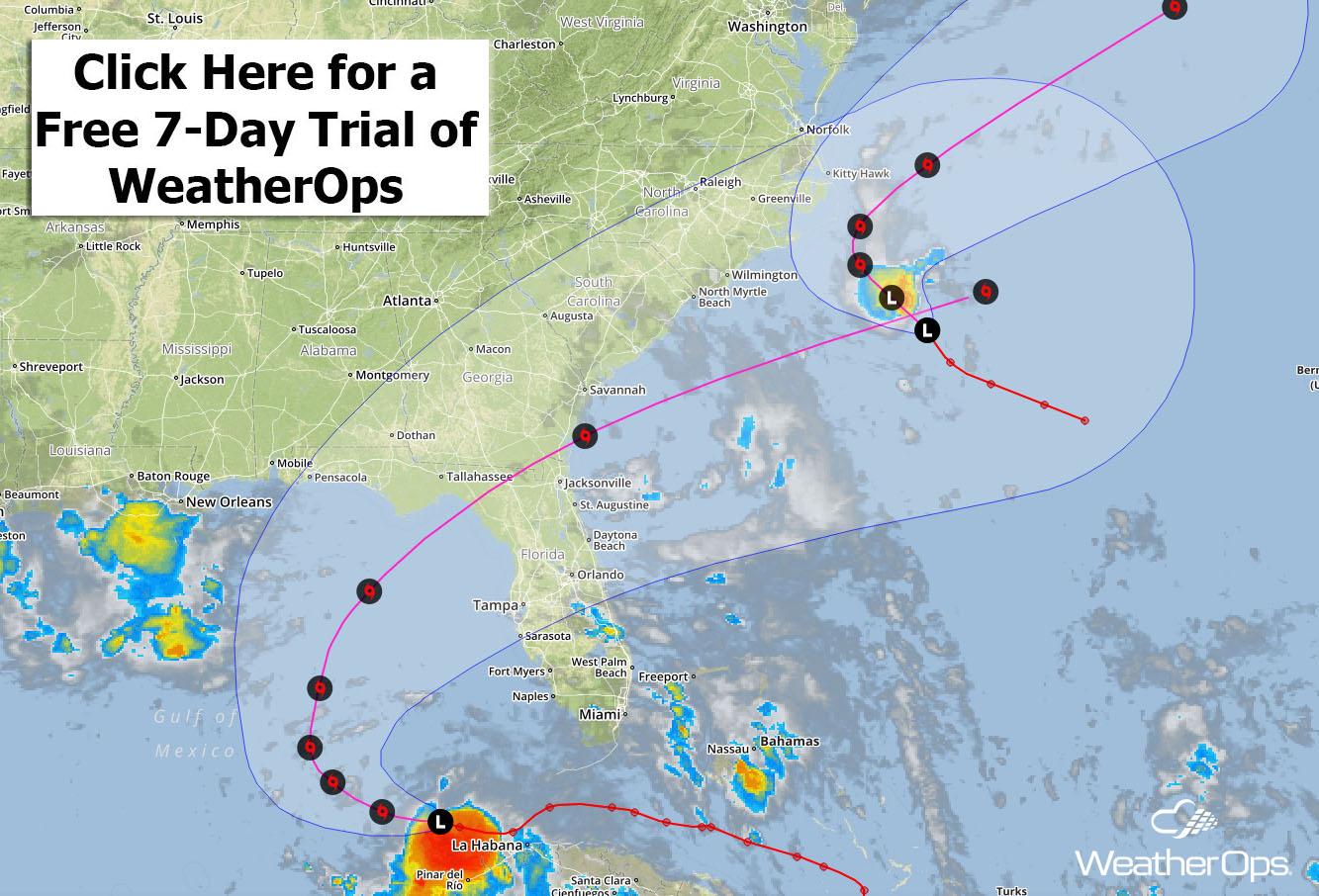 So, here is a run-down on what is actually happening right now;

This is a category 2 hurricane with maximum sustained winds of 110 mph and is expected to remain at or near this intensity for the next few days. Moving north at 2 mph, Hurricane Gaston should begin an northeasterly turn later today. This storm poses no hazards to the US.

Tropical Depression Eight remains rather poorly organized while moving slowly northwest today. Conditions may allow for modest intensification during the few days although significant intensification beyond a mid-range tropical storm is not expected. A slow northwestward motion should continue through early Tuesday bringing this system quite close to the Outer Banks of North Carolina before the track turns northeastward and out to sea.

Tropical Depression Nine continues to become better organized this afternoon. Recent satellite data shows a well-defined circulation with a large area of 30 to 40 mph winds over the eastern half of the circulation. Significant thunderstorm activity continues to move closer to the center from the southeastern quadrant. Aircraft reconnaissance will be investigating TD Nine during the next couple of hours and it would be no surprise if they locate tropical storm force winds. All interests in the region should continue to monitor TD Nine

This is currently a category 3 hurricane with maximum sustained winds of 125 mph and is expected to peak within the next 12 hours. Moving west at 15 mph, Hurricane Lester will approach Hawaii by early Saturday morning. There are currently no watches or warning in effect with this storm.

This is a category 2 hurricane with maximum sustained winds of 100 mph and is expected to peak within the next 24 hours. Moving west-northwest at 10 mph, Hurricane Madeline is forecast to begin to move at a more westerly track. It will approach Hawaii on Wednesday. There are currently no watches or warning in effect with this storm.

WeatherOps has numerous meteorologists keeping an eye on the weather 24/7.  With clients located in and along the Gulf of Mexico, WeatherOps has been issuing Significant Tropical Disturbance Advisories for over 10 days, that is multiple days before the NHC even labeled the storm in the Gulf as a Tropical Depression. If you want accurate information, continue following us on Twitter and FaceBook for the latest news. If you need an accurate forecast for your assets, contact us and let us help you be prepared in plenty of time for any stormy weather that may come your way.