Hurricane Matthew is Grinding Along the Coast

Hurricane Matthew continues to grind along the coast toward the north-northwest parallel to the east coast of central Florida.  The core of the storm has stayed just offshore for the most part, but a portion of the outer eyewall is brushing past Daytona Beach at this time.

Maximum sustained winds are holding at 120 mph.  A wind gust of 107 mph was reported at Cape Canaveral earlier this morning, and recently a gust of 69 mph was measured at St. Augustine.  Weakening is likely but Matthew should remain a major hurricane today as it continues to hug the coasts of northern Florida and Georgia.  As it turns toward the northeast this weekend - again moving on a course near or over the coast in Georgia and the Carolinas - further weakening is likely.  On Sunday Matthew is forecast to turn toward the east and then southeast, finally pulling away from the Southeast coast.  After that, it is likely to loop back toward the south and then southwest early next week.  This course takes it toward the Bahamas and possibly southern Florida by the middle of next week, though by that time Matthew is expected to be much weaker.

In the interest of those in coastal areas, we are currently offering WeatherOps for free throughout Hurricane Matthew. Our focus is on the protection of life and asset and, for that reason, we will attempt to put the full WeatherOps suite in the hands of decision makers throughout the region. Simply give us a little info about yourself and we'll get things started for you: 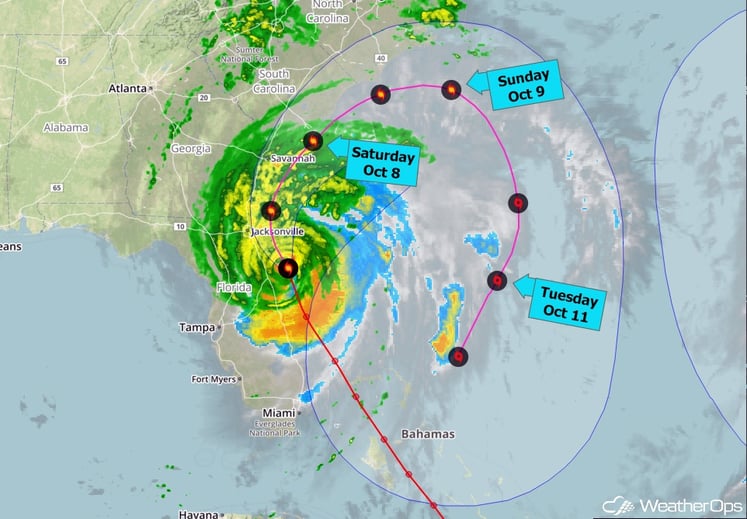 Just because Hurricane Matthew has not made landfall does not make the situation better. This allows the hurricane to remain over warm water and potentially cause much more damage along a larger area. The population along the southeast coastline is very high in certain pockets. All of these areas will be touched by strong winds, storm surge and flooding rains. Hurricane warnings now extend up into North Carolina. If you are asked to evacuate and live north of Georgia, now is the time to go. 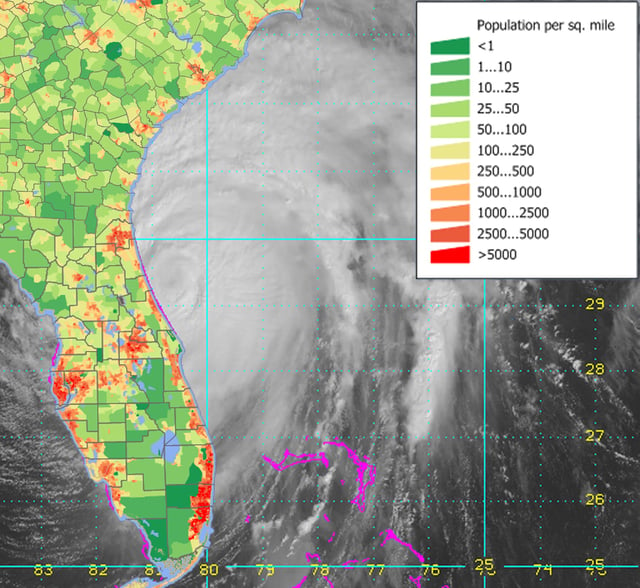 In the latest view of RadarScope, we can see the eyewall is just brushing the coast. Strong winds are within that band located just miles away from the beaches. Jacksonville will bare more of the brunt of Hurricane Matthew as the day progresses.

Here are just a couple of videos being tweeted from the Florida coastline. As has been mentioned many times, it is the storm surge and flooding from rain that will cause big problems. This is why people along the coast and on coastal islands were asked to evacuate early. Once the situation looks like this, rescue personnel are unable to come and get you or provide aid.

20 people, including children, stuck in #StAugustine bed & breakfast. They say they're getting worried, as the surge is about to come in. pic.twitter.com/EMgX2UqBwb

Luckily, the US is not taking a direct hit from the strongest side of the hurricane. Haiti, with poor building codes, unfortunately did take the worst of this storm. The death toll there is approaching 1,000 and will rise as relief efforts make it into areas that have been cut off due to flooding and bridges being destroyed.