Hurricane Matthew is Causing Havoc in the US

Hurricane Matthew is still a couple of days away from the US, but it already causing havoc in the US. Evacuations are underway for many from Florida up to the Carolinas. Not only could it cause massive problems as it passes along the coast, but some models are showing an unusual future path.

After passing over Haiti and Cuba, Matthew is now approaching the Bahamas. While slightly weaker, as a Cat 3 with max winds at 120 mph, he is expected to strengthen slightly as he gets back over water. Already, the eye is trying to reform as it reorganizes.

Some forecast models show a further west track for Matthew over the next few days, taking the storm parallel to the Florida coast, then along the immediate coast and at times just inland, instead of a little offshore. This would result in more significant impacts for much of the Florida coast, particularly in areas from West Palm Beach, up to Melbourne and Daytona Beach.

Of additional interest is that after taking Matthew up towards the Georgia coast, the forecast model continues to send Matthew back south and the southwest. However, instead of turning Matthew back out to sea eventually, the track has a vastly weaker Matthew crossing Florida and entering the Gulf by Tuesday of next week, with it then meandering in the eastern Gulf.

The forecast track of Matthew remains highly uncertain past the next few days and will likely continue to vary dramatically in the forecast models as things evolve. It is important that those along the entire coast pay close attention to future forecasts.

In the interest of those in coastal areas, we are currently offering WeatherOps for free throughout Hurricane Matthew. Our focus is on the protection of life and asset and for that reason, we will attempt to put the full WeatherOps suite in the hands of decisionmakers throughout the region. Simply give us a little info about yourself and we'll get things started for you: 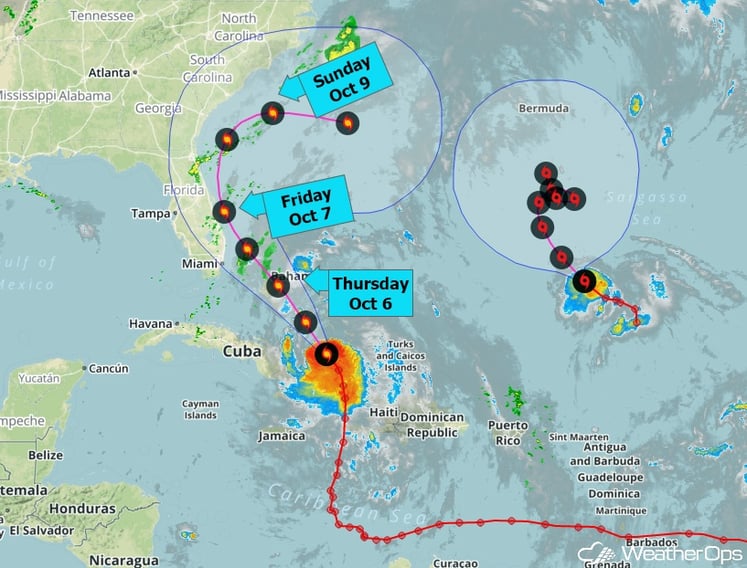 If Hurricane Matthew does take a loop around the southeast coast and hit Florida for a second time, it won't be unprecedented. There are six other occasions, since 1906, that this has happened. Should this happen again, the damage in Florida could run into the millions.

As for now, there is a state of emergency in Florida, Georgia, South Carolina and North Carolina. Many of the coasts are evacuating at this time. There are fuel shortages and grocery stores are out of water, bread, batteries and other essentials. Hurricane Matthew may be a couple of days away, but it seems like many are listening to officials and taking heed of this storm's potential impact.