How Much Snow Can Your Roof Hold?

When we think of hazards associated with snow, we usually think about issues such as travel issues or power outages. One serious problem often overlooked is with roofs on homes and commercial buildings, especially those with large-span installations. Do you know how much snow your roof can hold?

While the amount of weight a roof can bear depends on several variables, most can support 20 pounds per square inch of weight before becoming stressed. In areas where heavy snow is common, such as New England and the mountainous regions, roofs may be designed to support greater loads. The weight of the snow on your roof can be estimated by keeping the following guidelines in mind: 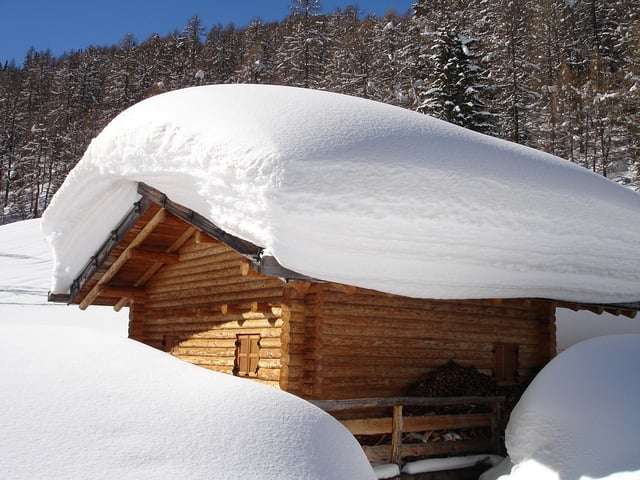 Melting snow generally tends to run off steeply sloped roofs (greater than 3 inches of slope in 12 inches of horizontal distance). Ice and snow tend to accumulate more quickly on roofs that are either flat or have a low slope.

Another potential hazard with heavy snow loads on a roof is called a "roofalanche". Roofalanches, similar to avalanches, are large masses of snow that can fall from a roof. The snow is dislodged when rain falls on the load. Once the snow is displaced, it can bury anything near the building and trapping people who may be in its path. With several feet of snow that have fallen in the Sierra Nevada recently, residents are being warned about the potential for roofalanches.

Heavy rain will make Roofalanches (sudden release of snow from roofs) a significant hazard today. With several feet of snow on roofs throughout the Sierra these collapses can seriously injure or even kill someone. Use extra caution anywhere snow may shed from roofs. pic.twitter.com/hQkvuyEE5w

If the snow load is in the range of the limits outlined above, the snow should be removed from the roof. Anticipating the snow load is a important for both residential and commercial large-span roofs.