How Does Summer 2017 Compare to Past Summers?

While some extreme heat has been seen this summer across portions of the country, most recently across the Pacific Northwest, the entire June-August summer period is running much cooler than last year for the country on a population weighted basis.

The plot below shows the June-August average US temperatures on a population weighted basis since 1981. NOAA generally shows temperature data for the country that is based on an area weighted average. While this data is similar, weighting the temperature observations based on population density (using 2010 census numbers) is more useful when trying to compare to energy consumption data. Hot weather in places like Los Angeles, Houston, and New York City will have a bigger impact on total US energy consumption than will hot weather in Billings, Montana.

So, this plot shows that this summer (denoted by the yellow dot on the right end of the plot) is running well below last summer’s record warm level, but similar to what was seen in 2015, and warmer than the summers of 2013 and 2014. The value for this year uses observations through August 8th and then forecast data for the remainder of the month. The coolest summer since 1981occurred in 1992, though the cool weather that year was aided by the cooling influence from the eruption of Mount Pinatubo the previous year.

The western portions of the country have been the focal area for heat this summer, while areas farther east have been more variable. Most of the central and eastern portions of the country were still warmer than normal during June and July, with the main exception being the southern Mississippi Valley region. While the first half of August will average cooler than normal across most of the country east of the Rockies, the warmth earlier this summer and potential return to warmer weather later this month should still push most areas to above normal for the entire summer average. Summer 2017 currently looks to end up as the 9th warmest summer on record since 1981, but more than a full degree Fahrenheit cooler than summer 2016. 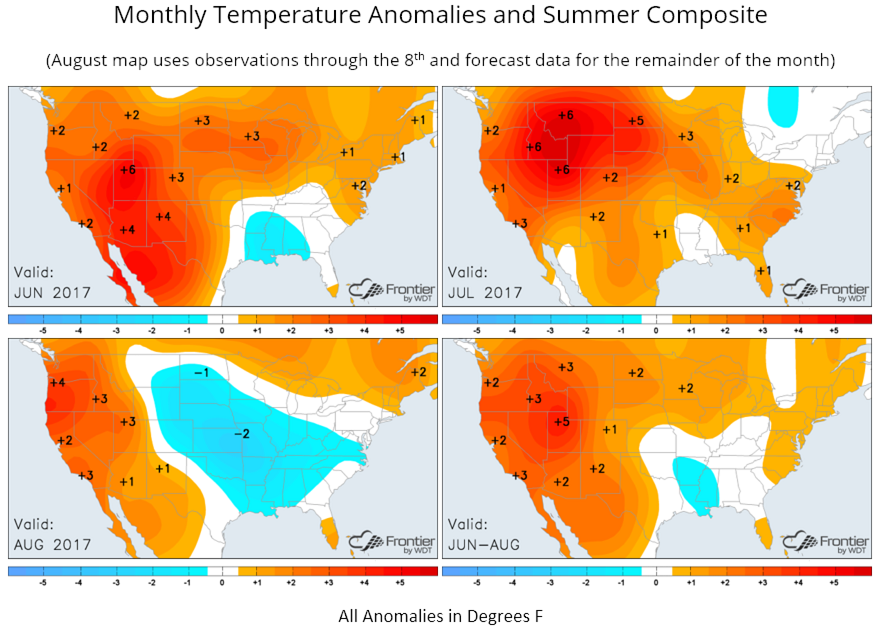 The plots above show the monthly temperature anomaly patterns for each month this summer as well as the full June-August temperature anomaly composite. Areas from Little Rock to New Orleans look to end up with the coolest anomalies for the summer season while areas from Salt Lake City to Boise may end up seeing the strongest warm anomalies for the summer.

Interested in more seasonal forecasts? Frontier Weather offers them and much more. Sign up for a trial today.