How Does ENSO Phase Impact the Atlantic Hurricane Season?

The 2017 Atlantic hurricane season is fast approaching, and so it is a good time to look at the factors that influence overall levels of hurricane activity. There are several factors that influence how active a hurricane season will be in the Atlantic: wind shear, ocean temperatures, the frequency and intensity of tropical waves moving off Africa, as well as the amount of dry air moving off the Sahara. In this blog post we will focus on water temperatures in the Atlantic and wind shear, which frequently is modulated by ENSO conditions.

First off, hurricanes derive their energy from warm ocean water, and so water temperatures in the Atlantic basin, mainly across the tropical areas where hurricanes develop, is an important indicator. The depth of the warm water is also important, since wave activity associated with strong winds tends to churn up cooler water from below the surface. Even if the surface of the ocean is warmer than normal, if that warmth is shallow, a slow moving storm may churn up so much cooler water that it essentially weakens itself. On the other hand, if there is warmer than normal water to great depth, then wave activity may not lower water temperatures very much and hurricanes are able to maintain a high level of intensity for a long period of time. In the western Pacific, where very warm water is often present to significant depth, typhoons often reach intense levels and maintain that intensity for a long period of time. In the Atlantic, deep layers of warm water are often more limited. The primary locations for deep warm water are in the western Caribbean and along the Gulf Stream. Warm water from the Caribbean flows northward into the Gulf as the Loop Current and then flows out into the Atlantic as the Gulf Stream. At times, eddies of deep warm water will break off the Loop Current and meander around the Gulf of Mexico. Any storms passing over the Loop Current itself or one of the break- away eddies can strengthen quite rapidly, such as Katrina did in 2005.

The following map shows recent water temperatures in the Gulf of Mexico. Note that the Loop Current carrying the warm Caribbean water can clearly be seen. Comparing the current location of the Loop Current and any associated eddies with the track of a storm in the Gulf can provide a good indicator as to whether that storm might strengthen significantly.

ENSO influences winds since it modulates the location and intensity of tropical convection in the Pacific Ocean. When El Nino conditions are present, and especially when coupled with warmer than normal water north of the equator west of Central America and Mexico, tropical convection is enhanced in that area. Since the eastern Pacific hurricane season begins before the Atlantic season does, in part because early season water temperatures are usually warmer there, a pattern of enhanced tropical convection can become entrenched over that portion of the Pacific. The rising air associated with that convection then tends to both enhance the west to east upper level winds which flow across into the Atlantic basin, and also tends to force sinking motion downwind of the Pacific convection, usually over Caribbean. That pattern is summarized by the following NOAA plot.

There also tends to be stronger trade winds as low level air feeds into the Pacific convection, which further enhances wind shear across the Atlantic basin. When La Nina conditions are present, the eastern Pacific is cooler, and tropical convection is more limited across the eastern Pacific. That results in weaker upper level winds and less rising motion over the Pacific, which in turn allows rising motion to become established over the Atlantic and Caribbean, which coupled with low shear helps to promote storm development. 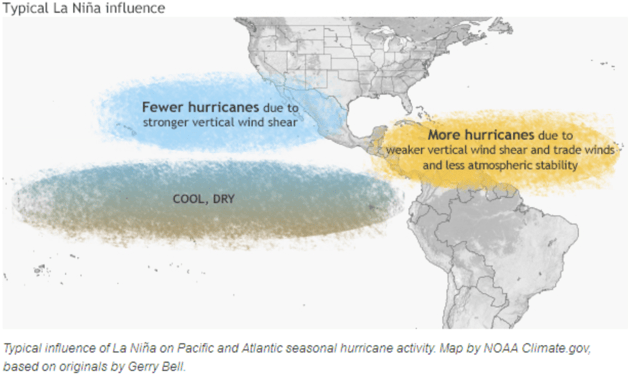 The following table summarizes the average number of named storms, hurricanes and major hurricanes for various ENSO phases since 1950 and since 1995 when tropical activity became more active in the Atlantic basin. The smaller numbers in each box show the ranges in storm numbers for each category. The bottom line is that both La Nina and neutral ENSO years (no El Nino or La Nina present) have seen an average of about 16 named storms since 1995 while El Nino years have seen an average of just under 11 named storms. Strong El Nino years tend to see even less activity, with an average of only 8 named storms per season since 1950. El Nino years also tend to see only 4-5 hurricanes, while La Nina years since 1995 have averaged more than 8 hurricanes. So, El Nino conditions usually mean a quieter hurricane season, but there have been exceptions, notably the 2004 hurricane season. Additionally, even quiet hurricane seasons have produced major landfalling hurricane events. Even if the season only produces one major hurricane, if that hurricane happens to hit a populated area along the Gulf or East Coast it can still be a significant and costly year in terms of hurricane damage. With the warmer than normal Gulf of Mexico this year, any storms that move into that region will need to be watched closely, as the warm water will be able to intensify storms a little more than would normally be the case.

With weak El Nino conditions possible for the second half of this year, the current expectation is for a somewhat less active hurricane season than recent averages, but that may change if El Nino fizzles. So, be sure to monitor El Nino forecasts during the months leading up to the heart of the hurricane season (most storms develop in the August to October time period) to get a general idea of how active or inactive the upcoming season will be.