Founded in 1836 where the Buffalo Bayou met White Oak Bayou, Houston has faced many floods. Not long after being established, the settlement flooded. Initially swamp land, people began to try and drain the area. Done with no planning, draining the land did not account for flooding rains. Flooding rains would come again and again over the next 180+ years. 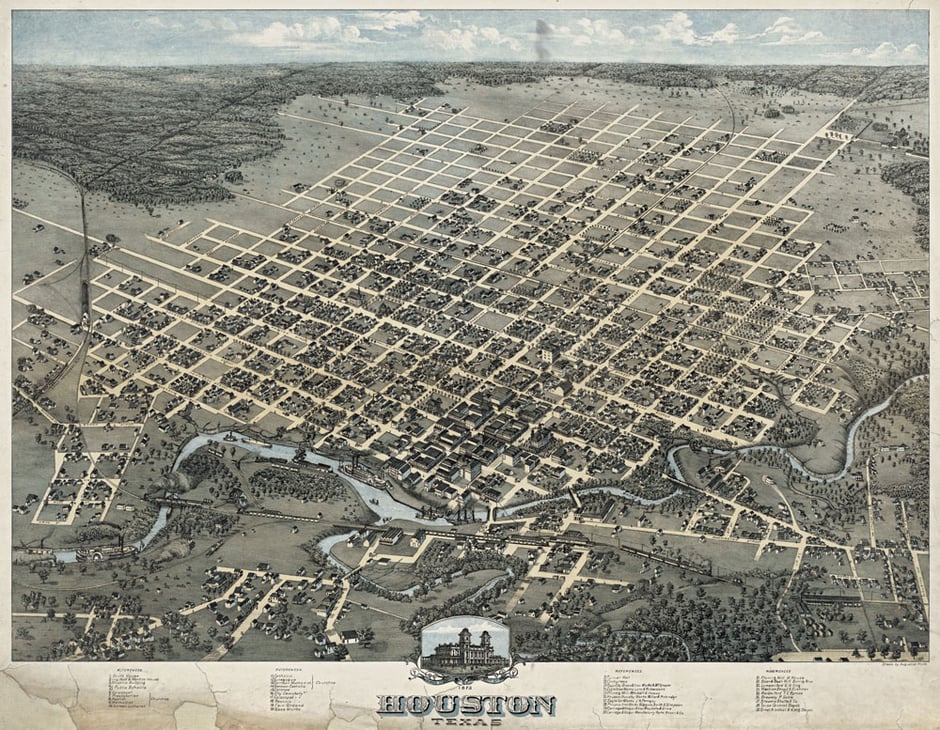 In 1873, Houston had grown from a settlement of 12 residents to a town of over 9,000. In the map above, it is easy to see how this city grew up around the bayous. The Buffalo Bayou had been deepened in 1869 to improve the shipping port. In 1898, Houston asked Congress for permission to make this a deepwater port, and thus the Port of Houston was created.

The timing of constructing a deepwater port could not have come at a better time for Houston. Up to that point, Galveston had been the main port for the Texas coast and was thriving. The 1900 hurricane changed all that and investors moved their money to Houston. The population was now almost 45,000. The discovery of oil at Spindletop in 1901, near Beaumont, changed the history of Houston again. Oil turned this rapidly growing town into the thriving city it has become.

In 1929, the Buffalo and White Oak Bayous both left their banks after a foot of rain fell. Downtown suffered massive damage. Property damage was estimated at $1.4 million.

Another flood in 1935 devastated downtown. Bayous had risen over 50 feet above normal levels leading to 40% of buildings and almost all bridges damaged beyond repair. Property damage doubled that of the 1929 flood and the Port of Houston was clogged with debris. With two-thirds of Harris County under water, citizens decided it was time for a flood control system. Houston's population was now over 290,000.

The Harris County Flood Control District was founded in 1937. The next year, Addicks and Barker dams and reservoirs were created to prevent the flooding of Buffalo Bayou into downtown. For over 60 years, the flood control worked to prevent major damage, even with multiple hurricanes such as Audrey (1957), Carla (1961), and Alicia (1983).

However, the 21st Century hasn't been as kind to Houston. Tropical Storm Allison (2001) devastated Houston causing damage to downtown businesses and hospitals. There were over 70,000 homes damaged, 95,000 vehicles damaged, and 23 fatalities. In 2008, Hurricane Ike struck the area with Galveston taking the full brunt of the storm. Flooding wasn't as severe as it might have been due to the rapid movement of the storm. However, winds from the eyewall caused damage to downtown buildings and left some without power for over a month.

In 2017, the population of Houston was over 2 million. It is the largest city in Texas and the 4th largest in the US. Harvey dropped an entire year's worth of rain in the Houston area and set a record for a tropical storm producing the highest amount of rain in the continental US. An estimated 5 trillion gallons of rain fell across the greater Houston Metro. Flood Control wasn't able to handle this amount of rain. The Addicks and Barker dams released water for the first time in their history. Homes built within the reservoir area filled with water. Tens of thousands of people were trapped in flooded homes and thousands more were in shelters. Harvey caused 106 fatalities in the US. Property damage exceeded $125 billion. This settlement built where two bayous meet flooded again, and probably will continue to in the future.