Heavy rain leads to flooding in North Carolina. A constant flow of moisture over the Raleigh-Durham area lead to rainfall totals over 8-inches in some areas on Monday. This area hasn't had this much rain since Hurricane Matthew affected the area last year.

While the rain has ended for now, many locations are underwater and rivers are beginning to rise. This could lead to additional flooding. In the below RadarScope image, you can see archive data of the rain that fell across North Carolina.

Crabtree Creek rose dramatically from under 2-feet to over 19-feet, in major flood stage, during this event. Numerous other creeks and small rivers are also above flood stage. 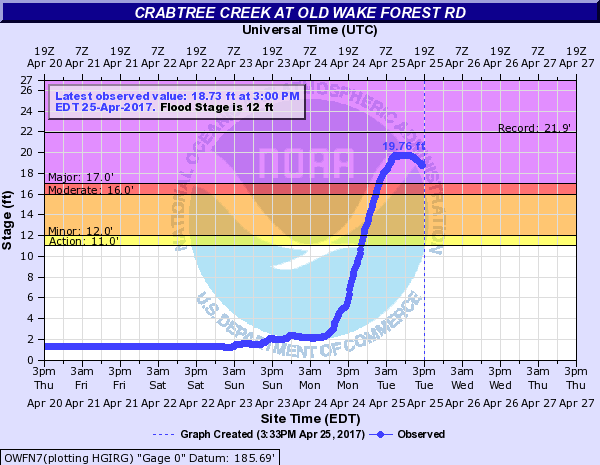 Remember, it is never a good idea to drive through high water. It doesn't take much running water to wash a car off the road leading rescue personnel to put their lives in danger trying to save you. As the saying goes, turn around, don't drown!

Keep on top of the weather by downloading one of our mobile weather apps. If you just want to know the warnings in your area, try Weather Radio. To see radar data, you'll want to have RadarScope on your phone.