The recent heavy rains in California and the impact of that water on man-made infrastructures like dams and reservoirs made national news this past week.  So much rain fell in the watershed that feeds Lake Oroville, CA that an emergency spillway had to be utilized to release water from the rapidly filling lake. When a portion of the Lake Oroville Dam emergency spillway was damaged due to the fast flowing water, a decision was made to halt the flow of water. Unfortunately, the water levels in the lake continued to rise, and lake water eventually flowed uncontrolled over an auxiliary spillway. That sequence of events led to the evacuation of 180,000 residents downstream in a precautionary move while engineers determined what measures would be necessary to secure the dam and lower the lake level.

The graphic below shows the recent dramatic increase in lake level due to the recent heavy rains in the region, and the decrease in water levels (dark blue line) as engineers released water via the damaged spillway. The graph also shows the lake level during the wet periods of 1977-1978 (green line) and 1982-1883 (thin blue line), and the dry period of 1976-1977 (red line). The light blue area is the historical average lake level. 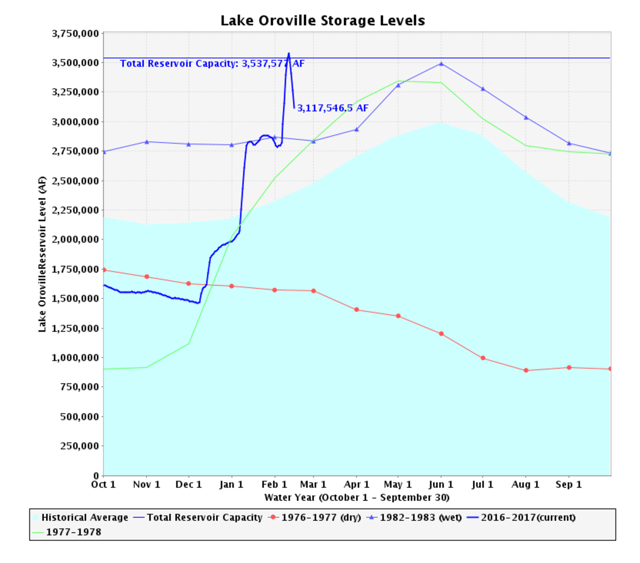 If you are an astute observer of seasonal trends in diagrams like the one above, you will notice that Lake Oroville’s storage level tends to go UP from March through July. This is due to melting snow in the Sierra Nevada mountain range. You can see this trend in wet years, as well as in the historical average.

Since October 1, more precipitation has fallen across this key Lake’s watershed than in any winter season since 1922. Although the precipitation might appear to be a welcome relief for a region experiencing multiple years of severe drought, the heavy precipitation is now putting significant stress on man-made infrastructure like the Lake Oroville Dam.

And it may get worse!

Lake Oroville is already starting with a higher lake level than in any of the wet years in its’ recorded past. The snowpack in the Sierras has not melted yet, and in the short term more heavy rain is on the way. It is inevitable that more water will be headed into Lake Oroville in the coming weeks to months. 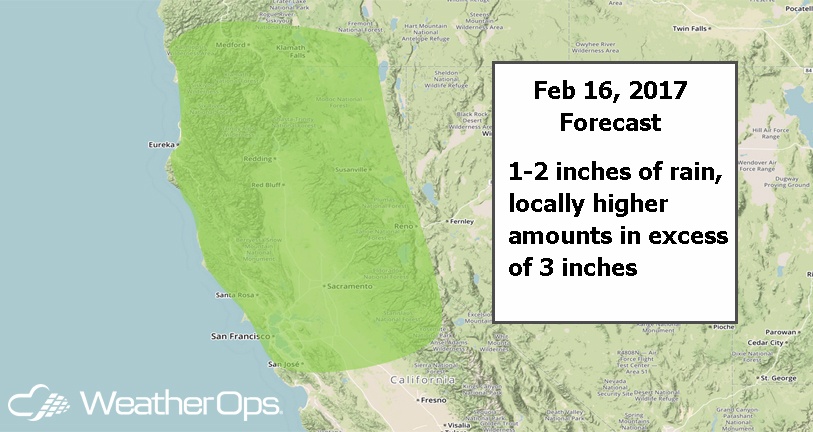 The problem of excessive runoff into Lake Oroville is likely just beginning, and California water managers and engineers will have their work cut out for them during the next 4 months.

The ability to forecast and monitor rainfall and temperature over the watershed that fills Lake Oroville will be key to important life and property saving decisions over the next four months. Heavy rainfall and rapid snowmelt will result in periodic surges of water into the lake. Those surges must be anticipated so that repairs to the spillway can be made, and the lake level can be safely managed. Let WeatherOps provide you with the accurate weather information you need to make informed, critical decisions.