Have You Heard of the Madden Julian Oscillation?

One of the main drivers in global weather patterns is Madden Julian Oscillation (MJO), which is a large propagating area of tropical convection (showers and thunderstorms) that has a strong influence in Jet Stream patterns, particularly over the Pacific.  The MJO can modulate weather patterns similar to ENSO (El Niño/La Niña) at times, but on a shorter time scale.  Both the MJO and ENSO influence global weather patterns by shifting the location of tropical convection, but whereas ENSO influences tend to persist for whole seasons, the MJO has more of an influence week-to-week weather.

The Indian and western Pacific Oceans are home to the largest reservoir of heat in the global oceans. The warmth and moisture from that area is lofted high into the atmosphere by large complexes of showers and thunderstorms, where it in turns spreads towards both the north and south poles.  In effect, that region is the main heat engine that drives global weather patterns. The flow pattern across the Pacific at high levels of the atmosphere is strongly influenced by the large volumes of warm and moist air being lifted up the large thunderstorm complexes over the Pacific. At times, the areas of tropical convection over the Indian and Pacific Oceans will be disorganized, other times it will be organized, but stationary, and sometimes it will develop into a large organized complex that propagates eastward with time.  A true MJO wave will have not just a propagating area of tropical convection, but also a large coupled area of rising and sinking motion in the atmosphere. Those large areas of rising and sinking motion in the atmosphere can help enhance (when rising) and suppress (when sinking) tropical storm development during hurricane season, as well as monsoon rainfall patterns. The combination of the shifting tropical convection and areas of rising and sinking air motion also influence the location of upper level ridges and troughs across the mid-latitudes, and thus temperature patterns. 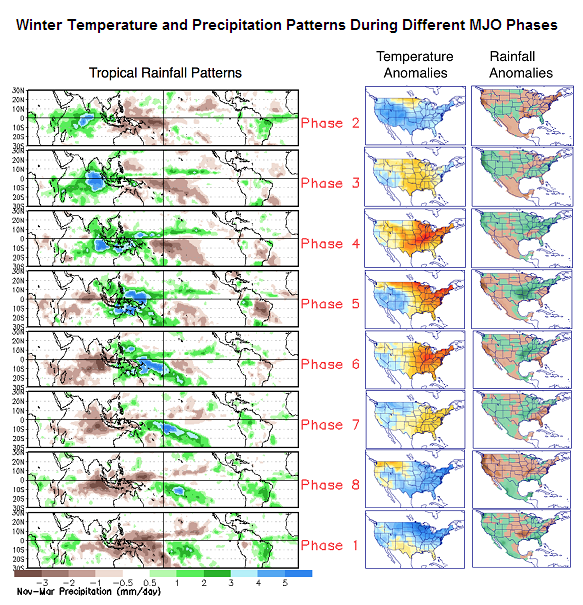 The plot above shows how temperature and rainfall patterns across the U.S. during the winter season are influenced by the location of tropical convection (green) over the Indian and Pacific Oceans.

If you're interested more graphics showing the phases of the MJO, try a trial of Frontier Weather today.