Have You Ever Experienced Thundersleet?

On February 5, some lucky people along the Iowa and Illinois border were treated to an unusual winter phenomenon. As an ice storm moved in, not only were they getting sleet, but they also were observing lightning. This type of weather is known as thundersleet.

Our view out of the office this evening. It's not often you see sleet and freezing rain out of a thunderstorm! #iawx #ilwx pic.twitter.com/aDczg52jng

Thundersleet most often occurs in association with wintertime storms that develop along a warm front. Warm air typically overlies a colder air mass (similar to freezing rain events). As thunderstorms develop in this environment, they acquire their energy from the warm air aloft. The updrafts that are present within these storms are strong enough to produce lightning. Once precipitation begins, it melts while falling through the warm air and then refreezes before falling to the ground as sleet.

This event was also captured on RadarScope. In the above animation, you can see lightning strikes occurring. It is showing Precipitation Depiction where the blue is designated as snow, and the red is a mix of snow and ice. 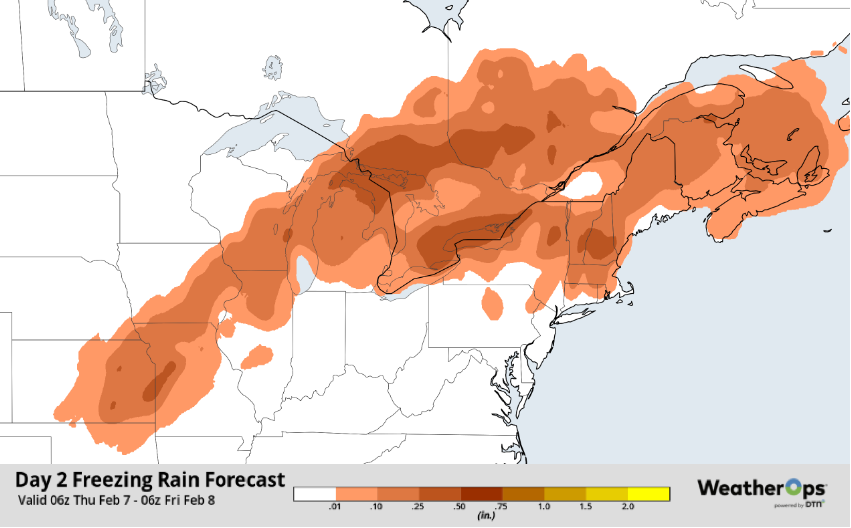 It's not over yet. WeatherOps shows a wintry mix is currently occurring from the Central Plains across the Great Lakes. Freezing rain, which began Tuesday night across the Upper Midwest, will lead to accumulations up to 0.40 inch and about an inch of sleet by Friday. This precipitation will move eastward, producing freezing rain accumulations ranging 0.10-0.20 inch from Eastern Michigan into New England. Travel conditions could be hazardous, so keep an eye on the forecast as this storm continues to develop.