Between Haiti's deforestation and Hurricane Matthew, a major humanitarian crisis is evolving. Rain and high winds continue to batter the country after Matthew made landfall early this morning on the southwest peninsula.

Hurricane Matthew is once again developing an eye, after losing it during landfall. Although broad, visible satellite shows the storm attempting to intensify again. Latest reports show that this is still a category 4 hurricane with max windspeeds of 145 mph.

The deforestation of Haiti began over 200 years ago and intensified when coffee was introduced in 1730. Within fifty years, a quarter of the colony's land was cleared and growing coffee. During the 19th century, the government was forced to export timber to pay off a large debt to France. This led to hillsides that were very susceptible to erosion, especially when more land was cleared for farming. After 1954's Hurricane Hazel, downed trees throughout the island were harvested. Logging operations intensified as a demand for charcoal, their main source of energy, increased with the growing population, leading to even more deforestation. As of 2006, less than 2% of Haiti was still forested. 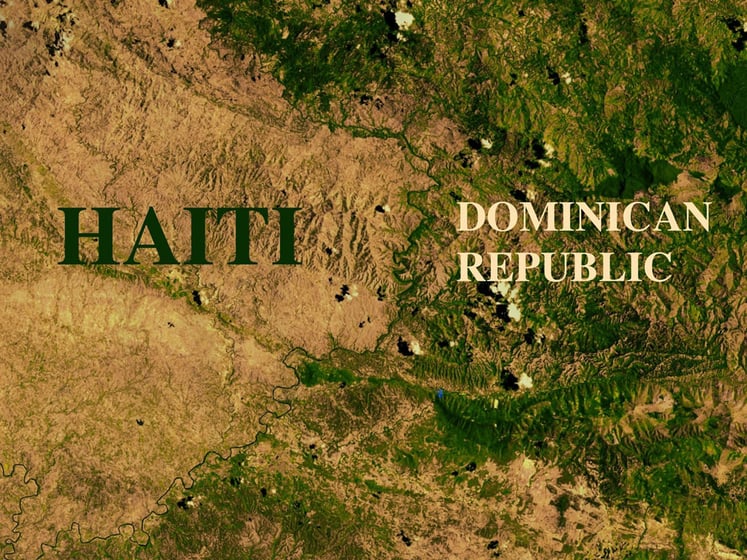 There is a lot of high terrain in Haiti. Many live on hills, such as this, or grow crops on terraces. Land that becomes saturated may cause debris flows. The resulting slurry of rock and mud may pick up houses and block bridges and rivers causing flooding along its path. This steep land with no trees will lead to landslides, as rain from Hurricane Matthew falls.

While not many images have come in yet from Haiti, there are a few videos being tweeted showing flooded rivers. As rain continues to fall in the hills, the rivers will continue to rise and mudslides will become prevalent. This poverty stricken nation will be dealing with this humanitarian disaster for a long time.

This river water has come down from the hills of Jacmel, here in Leogane. #HurricaneMatthew #MatthewHaiti pic.twitter.com/CarYU0aDAV

Flooding from #Matthew could be catastrophic. This is #Haiti's Rivière Grise, via @Ryuee: pic.twitter.com/iugAMJ9Ve4

Matthew should remain powerful today as it moves toward its next landfall in eastern Cuba this evening.  It may weaken further from moving across the mountains of eastern Cuba, but it is forecast to remain a major hurricane as it then turns toward the north-northwest and northwest and moves through the Bahamas on Wednesday and Thursday.  Later this week Matthew is forecast to turn back toward the northeast, but it could come quite close to the coast of Florida before then.  After making the turn, the storm will be moving roughly parallel to the East Coast though its center could make landfall in the Carolinas on Saturday.

Florida and North Carolina have both declared a state of emergency in expectation of the arrival of Hurricane Matthew. Evacuations of coastal areas may eventually be needed.