Flooding Conditions for Early Planters in the Southern Plains

The next few days are offering an unprecedented event for early March which will cause havoc for any commercial growers trying to get emergence in the arklatex region. This impacts the critical rice industry that the state of Arkansas is known for.

We’re seeing a trough that typically is associated with a winter pattern in terms of strength occurring in the tropics. The trough is so strong we’re seeing a critical measurement of strength for trough, pressure heights, have anomalies of over 6 standard deviation from normal!

This trough is about to stall and remain over central Mexico for several days. What that means is that the trough will draw moisture from the deep gulf northward into the United States. An unprecedented trough, plus gulf moisture equals very heavy rains and major flooding concerns. 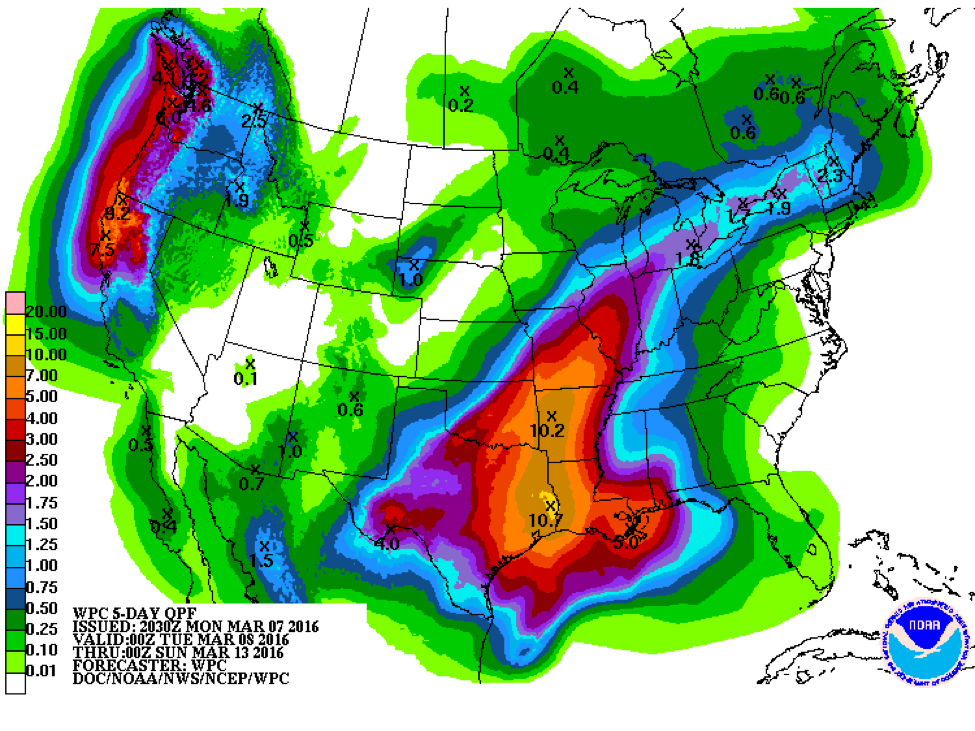 Early planters will be running into trouble. We’re seeing an estimated 8-11 inch rainfall forecast for much of Arkansas, Eastern Texas, Louisiana, and Eastern Oklahoma over the next 5 days. Parts of the Missouri valley can expect rainfall from 2-6 inches as well.

Excessive rainfall will cause soil erosion as flooding is a major concern. Growers can monitor rainfall totals over their fields using WDT’s WeatherOps Commander. With the 300+ numerical weather models WDT processes in house as well as experts in the field of radar meteorology editing radar data to remove the noise, we can provide the best rainfall forecasts, heavy rain alerts, and analysis of exactly how much rain fell as precise as 256 acre grids. Before, during and after the event, WDT can help keep you prepared for large scale events or even the most minor chances for precipitation. Contact us for more information or to take our services for a spin.