Cold weather is expected for the Oklahoma City Memorial Marathon on Sunday, April 30. There can be a variety of weather conditions in late April when this marathon is run. Past races have been warm and muggy, with relatively light breezes. Other races have been in jeopardy due to thunderstorms. The start of the 2014 marathon was delayed by nearly two hours as thunderstorms moved into the area prior to the start.

Heavy rainfall is expected through much of Saturday, April 29 across the region, and lingering showers are possible at times on Sunday morning. Perhaps the biggest issue on Sunday will be the stout northerly winds.  Temperatures at the beginning of the race will be in the low-40s, and due to expected persistent cloud cover, they likely won’t rise much about that mark for the entire race. The average high temperature for Oklahoma City in late April is about 76°F. High temperatures on Sunday will be some 20-25 degrees lower than that! During the first half of the marathon, runners will be battling a headwind given there will be northerly winds. However, by the second half they will have the benefit of a tail wind. 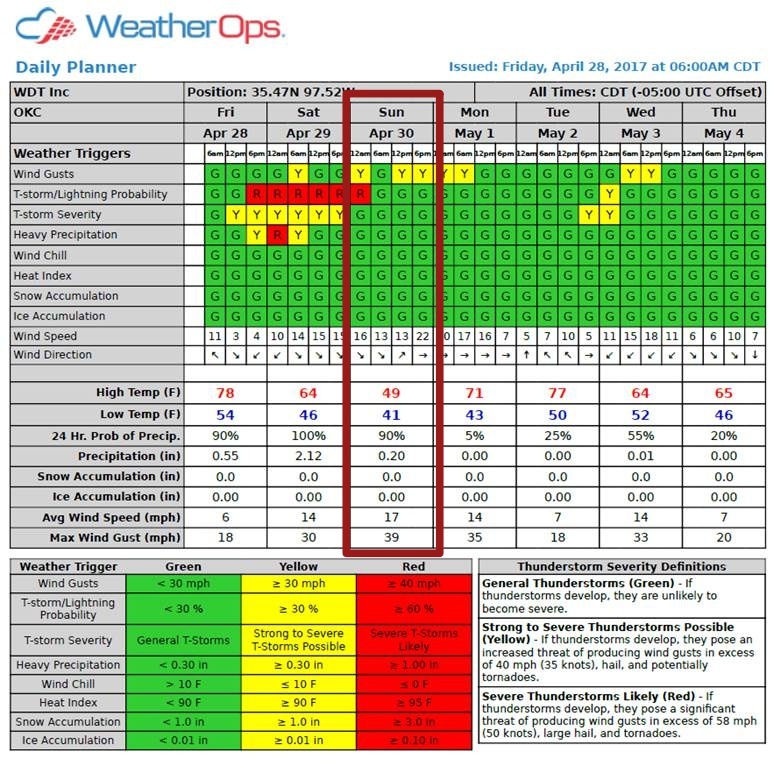 According to several years of research, some of the quickest times have been achieved when air temperatures are in the upper 30s to mid-40’s. It’s hard to say if this will be true on Sunday given that there will be detrimental winds during at least the first half of the marathon, however it is plausible that some impressive times are set by the more elite runners and those in the mid-pack given that temperatures are forecast to be in that range.

If you're planning on running in the Oklahoma City marathon, make sure you dress for the colder temperatures. It's going to be a bit of a shock if your come dressed prepared for an average late April day.