Are You Ready for the August 2017 Solar Eclipse?

As both a meteorologist and an amateur astronomer, I know first-hand the impact weather has on both visual observing and astrophotography. Weather will certainly be a major factor for the upcoming August 21, 2017 total solar eclipse, particularly cloud cover.

Only in the USA
The August 2017 eclipse will be the first total solar eclipse visible in the lower 48 since 1979, and interestingly, this will be the first total solar eclipse since 1776 that is visible ONLY from the United States (well, excluding neighboring ocean areas). The map below shows the path of totality, where the sun will be completely covered by the moon, resulting in a couple minutes of near darkness. In that band, the corona of the sun will be visible during totality, as will numerous bright stars and several planets. Mercury, Venus, Mars, and Jupiter will all be visible in the sky during mid-totality, as will the bright winter constellations such as Orion. Other bright stars, normally visible in the winter night sky, such as Sirius and Procyon will also be visible for a couple minutes. 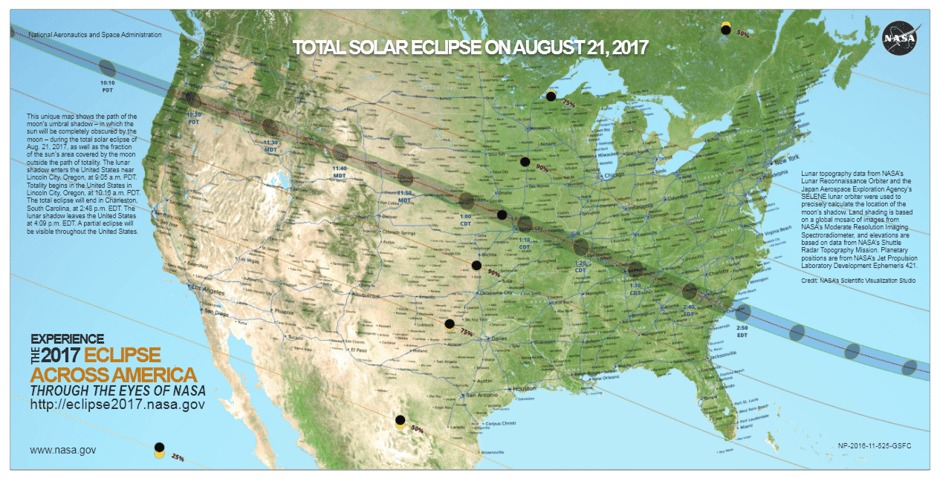 The plot below shows a view of the solar eclipse from space, with the dark shadow of the moon readily apparent. 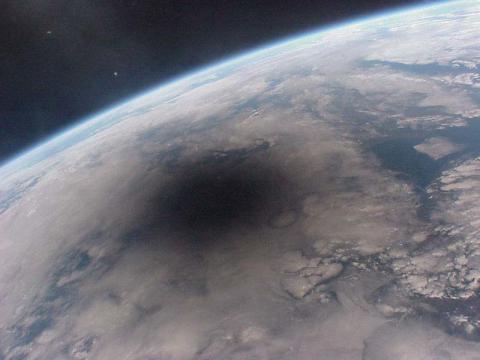 Swath of totality
The swath of totality during the August 2017 total eclipse will be a little narrower than in many other total eclipses, and the duration of the eclipse will also be a little shorter than typically seen. Totality will last only about 2 minutes in Oregon, and about 2 minutes and 40 seconds in Kentucky. Still, that is much better than the upcoming eclipse of December 6, 2067 when far eastern Brazil will only see totality last about 8 seconds! On the other hand, when the moon, sun, and Earth configuration is ideal, totality can last over seven minutes. The size and duration of totality varies because of differences in the distance between the Earth and the moon, the distance between the Earth and the sun, the time of day, and the latitude at which the eclipse occurs. The moon orbits the Earth in an elliptical path, and the distance varies by over 30,000 miles, from as close as around 221,000 miles to as far as around 252,000 miles. When the moon is closer to the Earth during an eclipse, the resulting shadow is larger. In fact, the average distance from the moon to the Earth is about 239,000 miles, but the length of the moon’s shadow is only about 235,000 miles. So, not only does the moon need to line up with the sun, but the moon must also be closer to the Earth than normal.

It's all about angle
The sun angle matters for eclipse duration. If the sun is lower in the sky during an eclipse, the moon’s shadow will be larger, just like your own shadow is larger early and late in the day. So, eclipses happening in the Northern Hemisphere in the summer will have a higher sun angle than those occurring during the winter, which also helps to keep the shadow smaller. Likewise, since the shadow of the moon will hit the earth at an oblique angle at higher latitudes, eclipses near the poles will cover very large areas.

The time of year also plays a role since the Earth is closest to the sun during January and farthest from the sun during July, the apparent size of the sun is a little smaller during the summer which can help increase eclipse duration. However, this has less of an impact than other factors in general.

While this eclipse may not be the longest lasting or cover the largest area, it will be passing across the country from coast-to-coast, allowing easy access for many, many people. Areas near Portland, OR, Kansas City, MO, St. Louis, MO, and Charleston, SC will be in or near the band of totality, and a large swath of the country will be within a six-hour drive. One thing to keep in mind though is it is not just good enough to be in the path of totality, you really want to be as close to the center of that path as possible as the duration of totality is less than 30 seconds close to the edge, but more than two and a half minutes near the center.

Weather along the path
With the eclipse occurring during August, the odds for clear weather are much higher than if the eclipse was occurring during winter or spring. The worst-case scenario for this eclipse would be a large tropical system moving northward out of the Gulf of Mexico and covering most of the eastern half of the country with clouds and rain. Even without a tropical system, typical afternoon showers and thunderstorms will be a concern across the southeastern US. The areas with the best chance for clear weather will be portions of the interior West, such as eastern Oregon, as well as the Great Plains region. The maps below, prepared by Jan Anderson at http://eclipsophile.com/, show the average cloudiness across the US at 10:30 am, local time, and 1:30 pm, local time. The 10:30 map can be used across the Pacific Northwest, and the 1:30 map is more useful from the Plains eastward. As can be seen, eastern Oregon is the region with the highest odds for a clear sky along the path of totality, while South Carolina has the lowest odds for a clear sky. 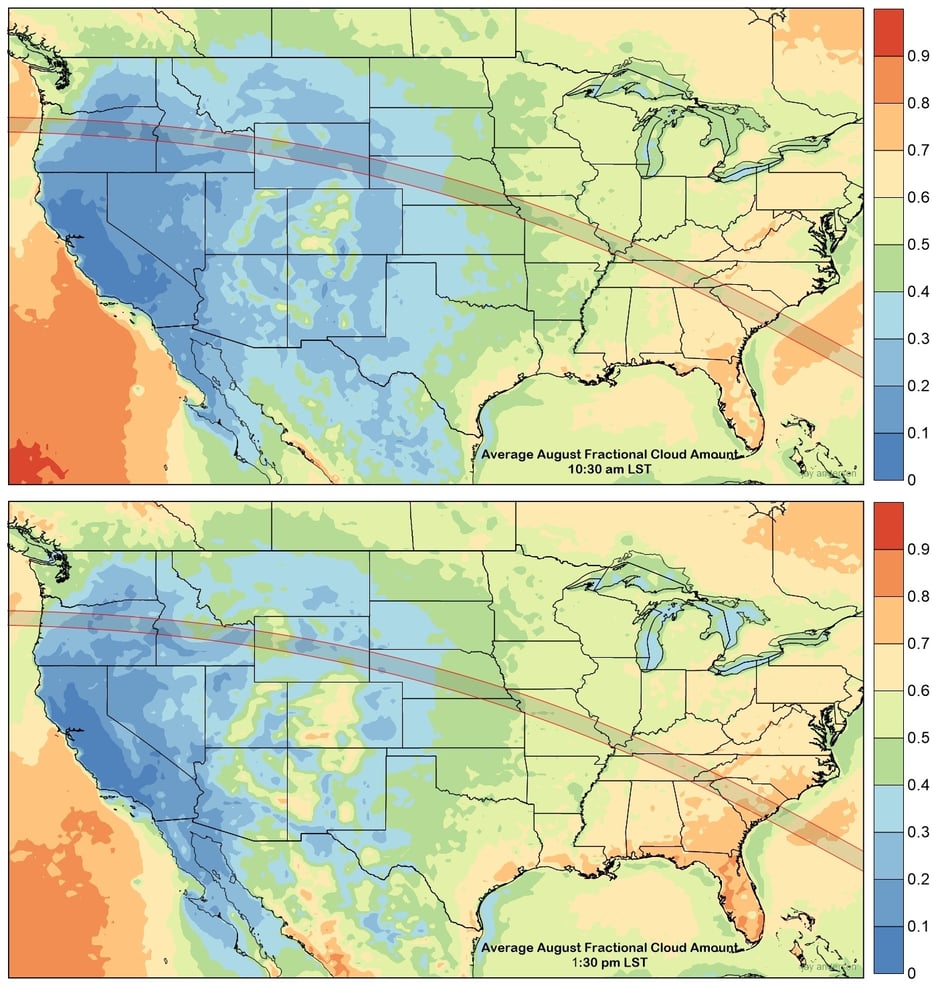 Cloud cover and temperature drops
The following graph, from the same website, shows the same values, but in graph form along the path of totality. Note that the northwestern US has much less cloud cover, on average, than the Southeast. One item to note though, is that the typical afternoon convective cloud development does tend to dissipate significantly as an eclipse progresses, much as it does in the evening hours of a typical summer day. This is because temperatures tend to drop steadily as the eclipse progresses, frequently by more than 5°F, which stabilizes the atmosphere. So, if there are numerous cumulus clouds around at the start of the eclipse, some of them will likely dissipate by the time totality arrives. That won’t be the case with large-scale cloud patterns driven by storm systems, however, nor high level clouds that aren’t driven by surface convection.

Weather resources for the best eclipse viewing
While climatology provides a good means of planning where to go view the eclipse, it will be important to monitor weather conditions in the days and hours leading up to the eclipse, as you may need to adjust your plans based on the weather outlook. WDT provides numerous weather resources that can be helpful for planning and monitoring weather conditions. If you are planning on hosting a large eclipse viewing event, you might consider looking at our WeatherOps event coverage services. For longer-range weather outlooks, our Frontier weather services provide a variety of forecast data and graphics, like the following 15 day forecast table for Casper, Wyoming and a sample ECMWF model precipitation forecast graphic.

On the day of the eclipse, be sure to have our fantastic RadarScope app ready to go on your computer, tablet or phone, so you can monitor any showers or thunderstorms that may be heading your way, and perhaps have a chance to drive to a better location before totality occurs. 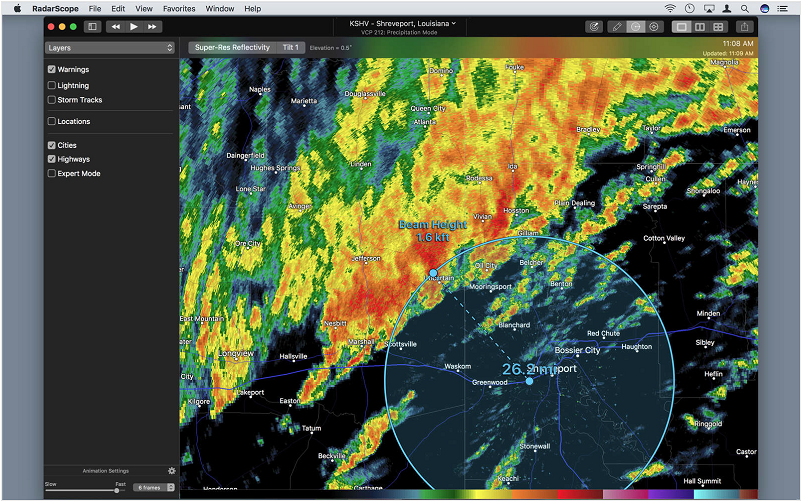 Keeping your eyes safe
A few notes about eclipse safety. For the brief duration of totality, it is perfectly safe to look directly at the sun.  Since the solar disk is being blocked by the moon, the amount of light reaching your eyes is generally no more than that during the full moon at night. However, before and after totality, eye protection must be worn when looking at the sun directly. While the brightness of the sun is greatly reduced in the minutes before and after totality, making it easier to look at, it is not the brightness that harms your eyes, but rather the UV and IR radiation blasting your retina. Much like a sunburn on your arm, by the time you notice the damage, it will be too late. So, be safe!

A great option is to buy a regular pair of binoculars with solar filters that can be put on for the eclipse, but then taken off so the binoculars can be used normally:

You can by simple solar filter covers for existing binoculars here:

Eclipse viewers like this can sometimes be better option for those that wear glasses since you just hold them in front of your eyes:

For bulk purchase of solar sunglasses, for as cheap as $0.90 each, check out those from Astronomers without Borders: https://www.astronomerswithoutborders.org/store/index.php?main_page=product_info&cPath=7&products_id=3&zenid=mr8vokvp66o4mjb796oee5hcf6

If you want to be able to see detail on the sun, along with solar flares and prominences, you will need to shell out a lot more money for a solar telescope. This is a good entry level one: