Are You More Likely to Die in a Flood or Flash Flood?

Which do you find scarier, a flood or a flash flood? Many don't realize there is a difference. All floods lead to damage of property, but which type leads to more fatalities?

A flood occurs when there is an inundation of water on to dry land caused by a river, stream, or drainage area. They tend to be slower scale events. When it rains upriver, the high water levels will move downstream. People can have days to evacuate, because river levels are regularly monitored. One river that regularly floods is the Mississippi. In the image below, you can see it over flood stage on the right compared to regular flow on the left. Broken levees, flooded farmland and entire town surrounded by water can occur in floods. River floods caused 45 deaths in 2015. 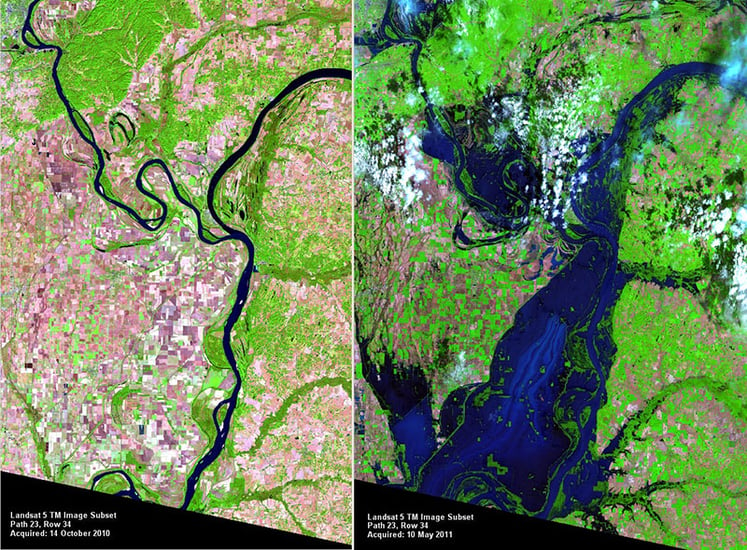 A flash flood is caused by heavy or excessive rainfall that overwhelms drainage capabilities. These are short term events occurring in 6 hours or less. These raging waters cause extreme destruction; destroying roads, washing away homes, and rising faster than people can react. If enough rain falls fast enough, any place can have a flash flood. If you are in a Flash Flood Warning, you need to pay just as much attention as if you were in a Tornado Warning. In 2015, flash flooding killed 129 people. The majority died in cars as they tried to drive through fast moving waters.

We've all seen the videos of vehicles driving through water that comes past their headlights. We've seen videos of people standing on car rooftops waiting for rescue. And we've even seen cars being washed away while people scream in terror. Yet, people still risk their lives thinking it won't happen to them. The phrase "turn around, don't drown" has been used for years. Maybe it needs to change, because these words haven't struck a strong enough cord. Here is another option:

If the water's high, expect to die.