A Look Ahead: Winter

If fall 2016 seemed unusually warm, that’s because it was, and not by just a little. Temperatures this season exceeded the warmth seen last year, and dramatically exceeded the seasonal averages from the last few decades.  The plot below shows the average US temperature and Heating Degree Days (HDD) totals from a population weighted standpoint, based on 2010 census numbers.  The well above normal temperatures this season resulted in well below normal HDD totals, which means home heating requirements were well below normal.

The following map shows average temperature anomalies for the September-November period across the country, and nearly everyone averaged well above normal.  A large swath of the country even averaged more than 5°F above normal for the three month average, a highly unusual event. 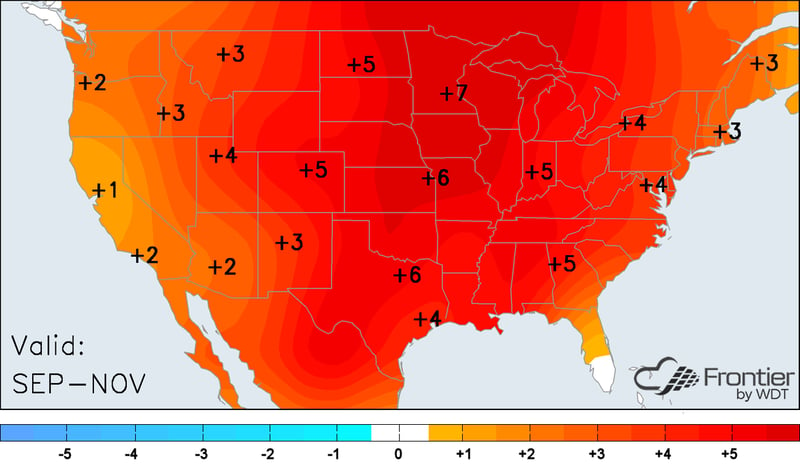 So, will the unusually warm fall of 2016 (and the hot summer before it) lead to another mild winter?  Well, most indications suggest that temperatures this winter will finally deviate from the persistent warmth of this year, but how much remains in question.

Last winter featured a strong El Niño event, but that has since been replaced by a very weak La Niña. The end result is that Pacific water temperatures are much cooler in many areas than last year, and the core of warmest water is farther west this year.  Pacific water temperature patterns are important for winter temperatures across North America as the location of tropical convection over the Pacific influences the track and intensity of the Jetstream.  When the Jetstream sends Pacific air across the Canadian Rockies, cold air is unable to build across the Canadian prairies.  Without a supply of cold air across Canada it is difficult to produce any meaningful cold across the US since even when the Jetstream sends air southward out of Canada, the air moving into the US just isn’t that cold.  However, when the Jetstream is directed farther north or south along the West Coast, cold air is allowed to build across western Canada.  That in turn can lead to extreme cold waves across the US when that air spreads southward.

Other factors besides Pacific SST patterns are also important.  Conditions across the Arctic are also drive winter weather patterns, and this year has featured extraordinary warmth across the Arctic along with an unusually early splitting of the polar vortex at high levels of the atmosphere.  While a warm Arctic might seem to imply a warmer winter pattern, the reverse is usually true.  A warm Arctic is usually indicative of cold air being displaced southward, and that has been the case the last couple of months. While none of that cold has ended up across North America, Asia has seen some extremely cold temperatures this fall as the September to November temperature anomaly plot below shows. 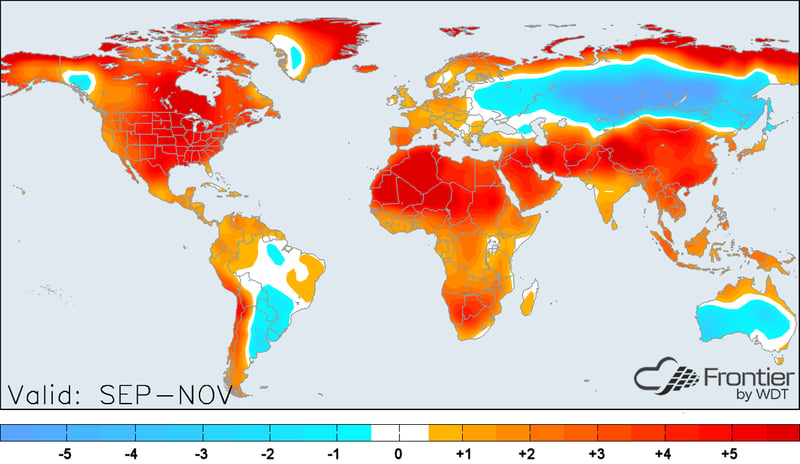 The developing pattern is finally going to allow cold to build across Canada as well as Asia in the coming weeks, and so a large swath of North America could potentially end up looking like Asia did this fall by the second week of December. The following map from the GFS ensemble composite shows the extensive cold likely to be in place across North America by the second week of December. 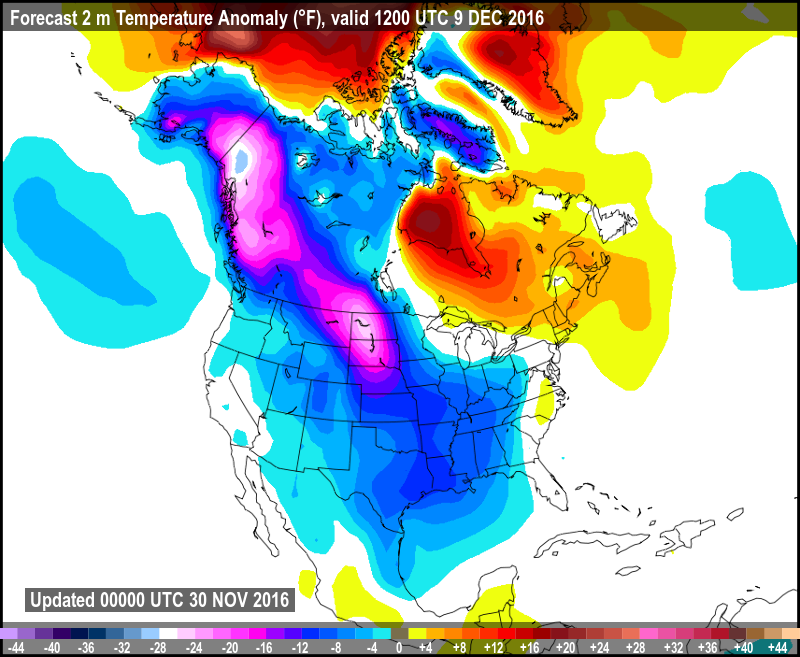 So, given that similar Pacific water temperature patterns in the past have favored a colder than normal north-central US, the pattern across the Arctic is likely to continue favoring more cold in the mid-latitudes, and the developing pattern in early December looks to do the same, our winter forecast favors below normal temperatures across the north-central US.  It remains uncertain how much cold will be seen across the eastern US this winter, but at least periodic shots of stronger cold are likely. However, cold weather is not likely to be as persistent across the eastern US and so the winter as a whole may average closer to normal or even above normal along the East Coast. Similarly, the expected Jetstream pattern will likely limit the duration and frequency of cold waves across the southern US, so even though some periods of strong cold are likely, the winter as a whole is expected to average above normal across the southern tier. 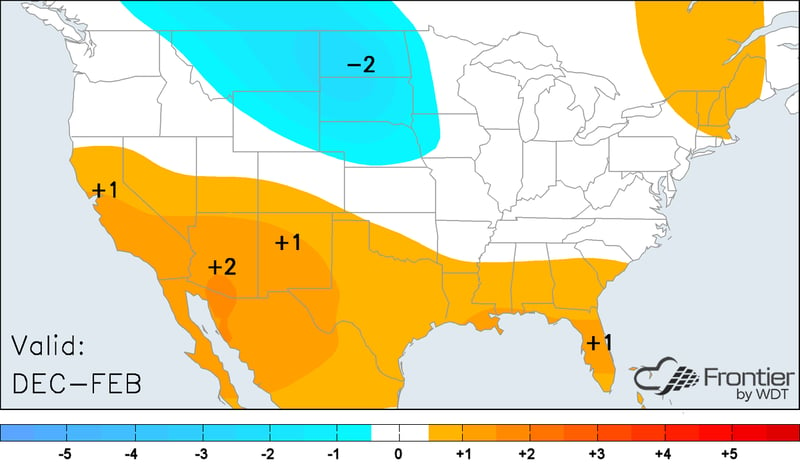 The pattern this winter should favor wetter than normal conditions across the northern tier of the US and drier than normal conditions across the southern US. So, drought areas of the Southeast may see little relief this winter. The wetter conditions expected across the northern US combined with expected colder air should result in above normal snowfall across much of the same region.  The southern US is forecast to see mostly near or below normal snowfall, but since snowfall totals are not normally very high to begin with, a single major winter storm could still push totals to above normal in some areas of the region.

Compared to recent  past years, this winter is projected to end up colder than last year as well as the winters of 2011-12 and 2012-13, but warmer than the winters of 2013-14 and 2014-15.  The graph below shows the projected average US temperature and HDD totals for this year compared to years since 1980. So, in summary, we expected a much more active and variable winter than last year, with at least a couple periods of significant cold likely in most areas of the country.  Colder than normal weather should be most persistent across the north-central portions of the country with above normal snowfall expected across most of the northern tier of the country this winter. 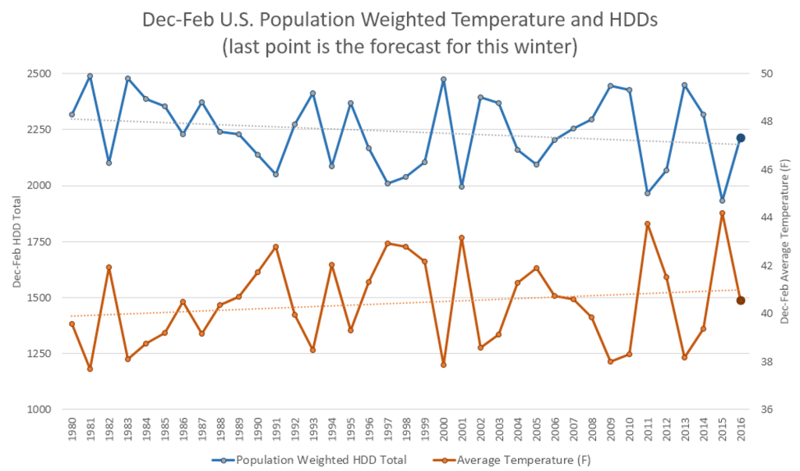