A “classic” El Nino winter? Not so fast my friends!

Obviously the “talk of the town” is the big El Niño and its putative impacts on global weather patterns this winter. By and large, meteorologists everywhere are advocating winter forecasts that closely match the “classic” El Nino composite. An analogy would be a football game where you have one heavily favored team (El Niño) versus a virtual unknown (all the other non-El Niño sources of climate variability that could impact this winter’s seasonal mean outcome). Well, sticking with this metaphor allow me to play the role of Lee Corso: “not so fast my friends”! 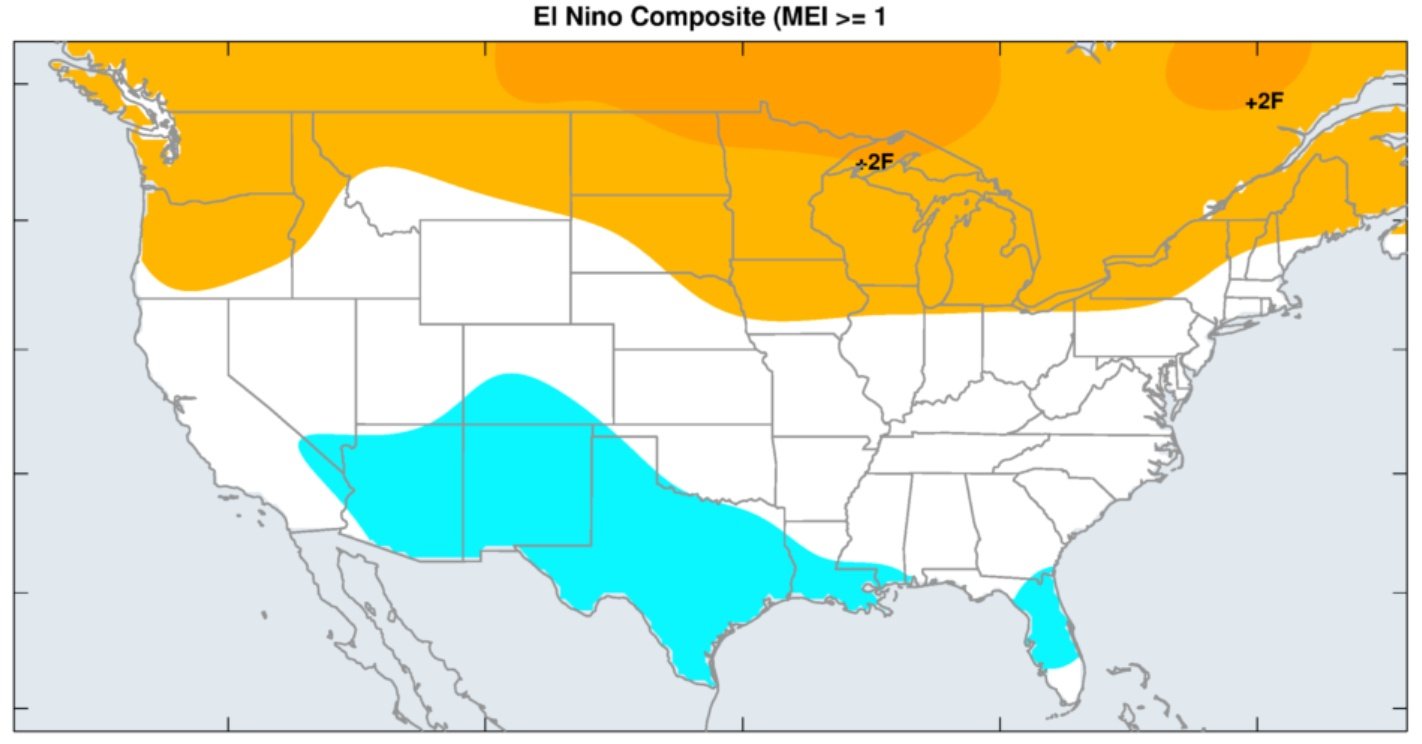 At first glance, one can hardly blame “consensus”. After all, the strongest El Niño so far this century is in progress and by some measures, including the Multivariate ENSO Index (MEI), is not far behind the most recent “Super” El Niño of 1997-1998. The strength of this event has brought the energy industry’s weather providers to rare consensus on the winter 2015-2016 national forecast and that consensus looks not terribly dissimilar to the composite shown above. For sure, this is the “easy” forecast to make!

Upon more careful consideration caution is in order. First of all, there have been only TWO “Super” El Niños since 1950. If we use the “extended” MEI database and count the number of events where the three-month winter average MEI value exceeded 2.0 (the criteria for a strong event) there are only 4 such events dating back to the winter of 1871-1872! This means that a professional seasonal forecaster cannot simply slap the composite above in front of their clients and “drop the mike”. In fact, the percentage of total variance of the North American wintertime temperature pattern accounted for by El Niño is only about 10% (this means that 90% of the remaining variance is accounted for something OTHER than El Niño). This is why it is difficult to defend official NWS forecasts predicting only a small chance of anomalous cold across the northern tier states of the country for a December-February mean outcome.

Secondly, like snowflakes no two events are alike especially OUTSIDE the tropics (where most of us live) where the strongest direct response to the anomalous central to east Pacific tropical sea surface warming occurs. Moreover, there is something even more troubling that we have to contend with: climate trend! The “fingerprint” of climate trend is amply evident: warming of the global tropical oceans, most notably the Indo-Pacific and Atlantic sectors; mid-latitude jet streams that are shifted towards the poles of both hemispheres and – related to the poleward-shifted jet streams - expansive, durable “heat ridges” that dominate the mid-latitudes and create widespread heat and drought. The astute forecaster can easily detect behaviors consistent with these slow changes, behaviors which appear to have both significantly SLOWED the emergence of this ongoing El Niño AND changed the manner in which it emerged!

The upshot of this is that the very real possibility exists for the emergence of a winter outcome remarkably different than the one represented by the standard composite – and the consensus. Only constant monitoring of observational trends and recognition of shorter-term weather-climate fluctuations will allow the astute forecaster to catch this departure of the actual pattern from the El Niño composites, should it occur. Before you bet all of your money on El Niño, please check our days 16-30 outlooks to see if the standard composite forecasts are working out.

We would like to talk with you about WDT Futures / Long Range Forecasting services. If you are interested in learning more, please leave us your information below.