Are you planning to go to an outdoor concert or event this spring or summer? Do you check the weather first? Many times, people have waited so long for their favorite band to play that they don't think of anything else. When it does start thundering or raining, either people try and wait it out in the elements or hide under a tent. Neither of these is a good choice. Check out these 8 times that extreme winds from thunderstorms affected outdoor events. 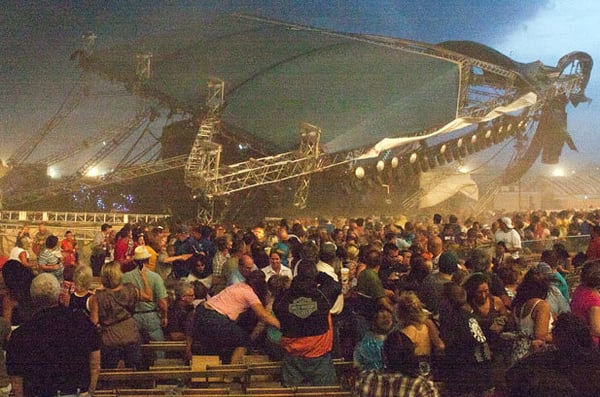 The Indiana State Fair stage collapse is one of the most well-known events of failure at a concert due to weather. On August 13, 2011, seven people died, and an additional 58 were injured when a gust front ahead of thunderstorms caused the stage to collapse at the Indiana State Fair before the band Sugarland played. Warnings had been issued, but the state fair did not have trained personnel to keep an eye on the weather. Unfortunately, this is not an unusual occurrence. 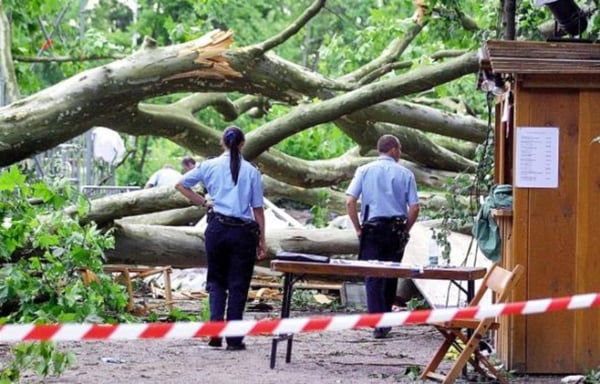 In 2001, teenagers were attending a music concert in France when thunderstorm winds over 90 mph impacted the area. Those in attendance were asked to take refuge under a tent. The extreme winds caused a large tree to fall on that same tent. This wind event led to 11 fatalities and 85 injuries. The forecast for that day had been for severe weather, but the concert organizers chose to proceed anyway. 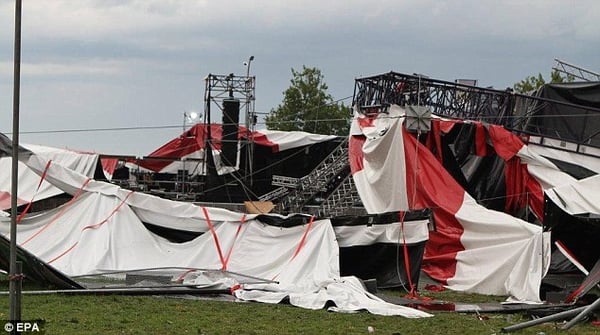 Those watching their favorite bands, at the Belgium Pukkelpop Rock Festival in 2011, were struck by a severe thunderstorm pelting spectators with hail. As people began to run for cover, severe winds caused tents to collapse, trees to fall, and one of the stages to collapse. Five were killed, and 140 were injured during this event. Storms had been predicted, and alerts were out, but organizers claimed they didn't know. 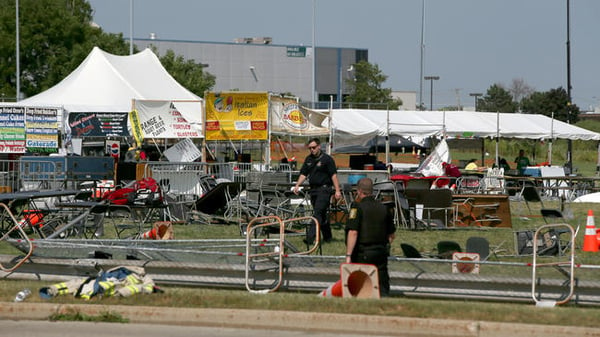 Here is a story of a festival that had a plan in place for severe storms, but didn't coordinate correctly or promptly. While there was a school nearby for evacuation purposes, no formal procedure was in place for this to happen. Severe thunderstorm warnings were issued, proper information was passed to those in charge, and it was only as the storm hit that they tried to decide what to do. Again, people hid under tents as the rain and wind came. And again, the tent collapsed leading to 2 fatalities and 15 injuries. 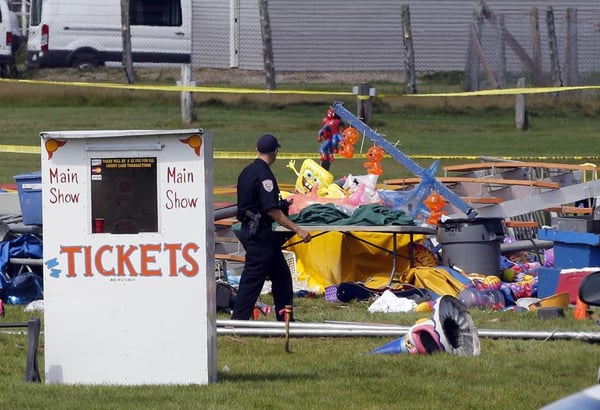 The last thing you want to hear when attending an event in a crowded tent with your children is performers telling you to run. With a severe thunderstorm warning in effect for over half an hour, those in charge were not paying attention to the weather, and thus the show went on. Hail, rain, and winds over 60 mph brought the tent down killing a father and child, and injuring over 30 other people. 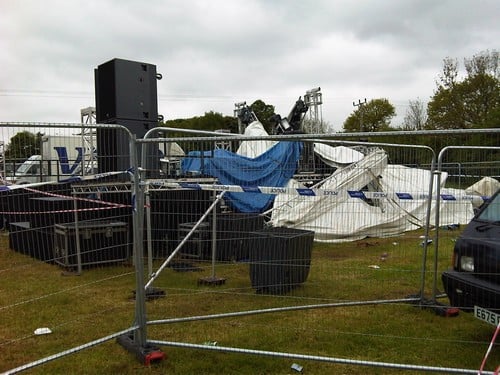 When concert organizers blame a stage collapse on a "freak gust of wind" even though storms were in the area, you know they weren't paying enough attention to the weather. This case is another music festival where extreme winds caused significant problems. Luckily, there were no fatalities in this event, but there were three injuries due to the collapse. 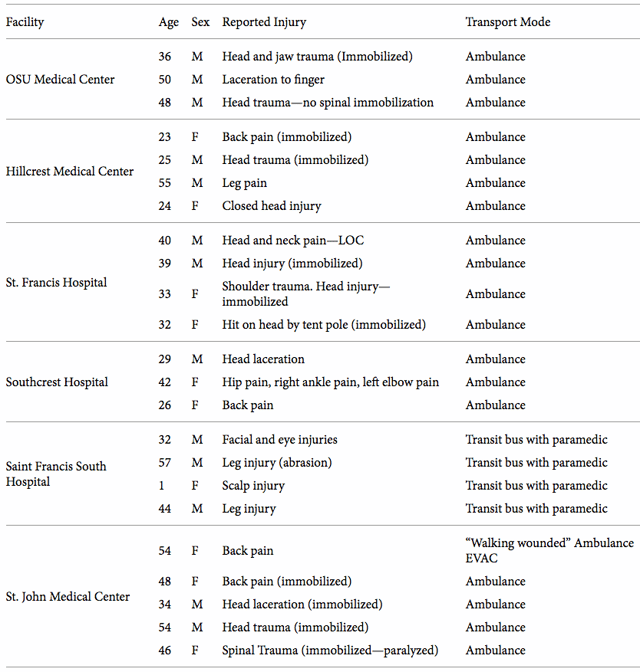 In 2007, severe storms in Tulsa caused numerous injuries when two tents collapsed at the Oktoberfest festival. As you can see in the image above, there were many types of injuries, from lacerations to head trauma. Oklahoma is a state where you hope people know to pay attention to the weather. Severe weather at all times of the year is not unusual, yet here is another case where no one was paying attention and people hid under tents. What many don't realize is that these large tents can weigh over 1,200 lbs and when they, and the metal holding them up collapses, anyone underneath is at risk of injury or death. Winds in the area were measured at over 85 mph. 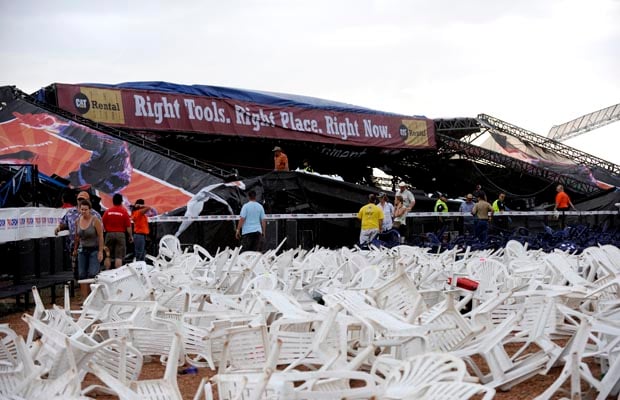 We started with a stage collapse caused by a gust front, so let's end with one. In 2009, the main stage at the Big Valley Jamboree collapsed due to extreme wind leading to one fatality and 75 injuries.

Meteorologists are well versed in understanding how storms work and that many times the wind will hit before the storm does. However, if you are not trained to look at the data, it can come as a shock to you. If you always expect the rain first, you will be wrong more times than not with severe weather.

The lesson here is that if you are a spectator attending an outdoor event, even one inside a tent, don't depend on the organizers paying attention to the weather or having an evacuation plan to keep you safe. If you are an organizer of an outdoor festival, you don't want to become a headline like these. Many of these events were held accountable and sued by the injured. You need a full weather plan that includes at what speed winds will bring down your stage or tents, an evacuation procedure, and a weather team is watching your assets and providing you with invaluable information should severe weather threaten.