Hopefully, Santa's 8 tiny reindeer weren't on summer vacation in Norway last Friday, as it was quite a sad scene for the legendary creatures.

A coworker shared this article with me first thing this morning: Lightning Storm Kills Hundreds of Reindeer in One Fell Swoop.  Having spent many years in forensic meteorology, I've run queries against archive lightning to confirm the cause of house fires, damage to wind turbines, and the death of cattle, but I never would have thought I'd be looking for lightning that killed reindeer.  Considering that the wildlife area in Norway "between Møsvatn and Kalhovd in Telemark County" (from local news source) is at nearly 60° North latitude, lightning is not a frequent event.  The World Wide Lightning Location Network provides a map of lightning climatology showing the number of lightning strokes per kilometer per year: 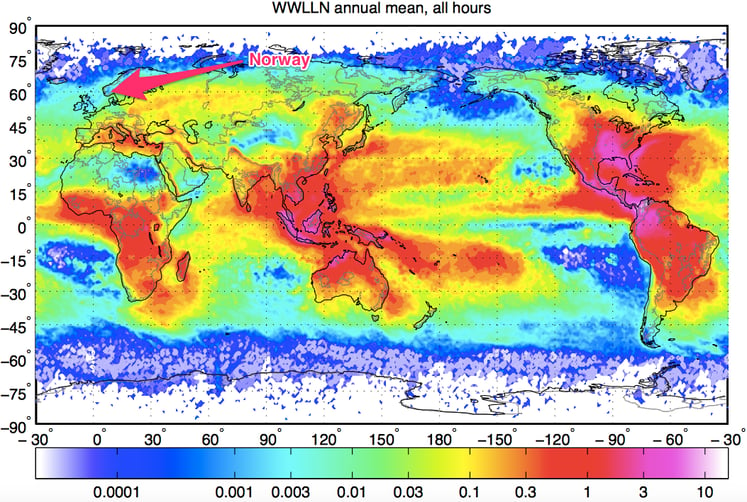 After finding what I believe to be the approximate location of the wildlife area where the reindeer were found, I ran a query for archived lightning data from WDT's WeatherOps Commander archive lightning tool.

As a result 46 cloud-to-ground lightning strikes were detected within a 20 mile radius of the general area between 12:15pm and 1:45pm local time on August 26, 2016.  While I don't know exactly where the reindeer were found, the lightning data does seem to confirm that their demise was unfortunately caused by lightning.  I've asked the local news source if there was any information on the exact location.  If I hear back, I'll update the map.