NOAA has released their full 2016 data for the US and global regions, and the data confirm that 2016 was a very warm year. The full year ranked as the 2nd warmest on record for the U.S., while the global average was the warmest on record.

If not for some extremely cold weather across Asia during the October to December time period, the global average temperature anomaly, as compared to the 20th century average, might have exceeded 1°C for the first time. Perhaps even more notable is that each of the last three years has held the designation as warmest on record, at least on a global basis. Furthermore, average yearly global temperatures have been warmer than the average of the trailing 30 years every year since 1977.

Meteorologists often use 30-year averages as a basis for what “normal” weather is, and at least on a global basis, temperatures have been staying steadily ahead of the 30-year average for the last forty years.  That hasn’t been true for the US though which has seen four of the last 10 years average colder than the average of the trailing 30 years. Even so, the three warmest years on record have all been seen during the last five years.

The following plot shows average annual US temperatures since 1896 with the 30-year average trend in red and the average for each decade in black. 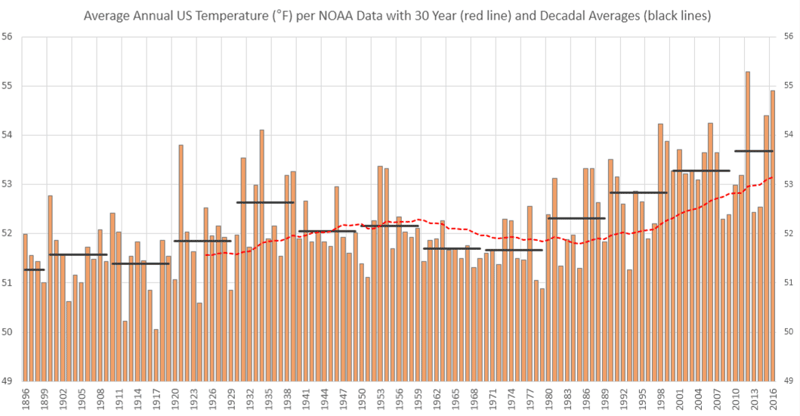 The next graph shows the average annual global temperature anomalies versus the 20th century average with the 30-year trend shown in red and the decadal averages shown in black.

The record warmth of the last two years was driven largely in part by the strong El Niño event that occurred during the second half of 2015 and first half of 2016.  With that El Niño now history, the Pacific Ocean is not as warm as it was the last couple years, and so global temperatures in 2017 should average cooler than in 2015 and 2016.  Even so, 2017 is likely to once again remain well above the average of the last 30 years.