Strong to severe thunderstorms are possible on Thursday across portions of the Eastern Plains and Great Lakes. Excessive rainfall is possible for portions of Florida.

A strong upper level trough and a surface low will move from the Great Plains into the Great Lakes. Strong to severe thunderstorms are possible ahead of the associated cold front from Minnesota into Iowa. Moderate instability and sufficient wind shear could allow some storms to become severe, especially in Iowa and Michigan. Morning convection could inhibit the development of thunderstorms until later in the day for northern portions of the area, but storms are expected to form late afternoon into the evening. Damaging winds will be the primary hazard with any storm that develops.

The remnants of Grace will continue to produce widespread showers and thunderstorms across Florida. There may be some flooding due to the previous day's rain. Widespread rainfall amounts of 1-2 inches with some locally higher amounts in excess of 3 inches will be possible. 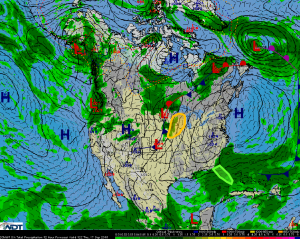