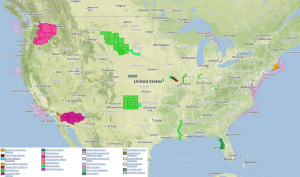 Delmarva into New England: Broad upper low over the Eastern CONUS will promote
showers and thunderstorms on Tuesday, some severe, across the Delmarva and portions of
New England. Southerly winds are expected to feed abundant Atlantic Moisture inland
during the morning hours with moderate instability developing by early afternoon. Severe
thunderstorms capable of producing damaging wind gusts in excess of 55 mph and isolated
large hail will be possible before activity gradually moves offshore during the overnight
hours.

Great Plains into Middle Mississippi River Valley: Further to the west, a weaker, yet
sufficient, sub-tropical jet should remain draped across the Central Plains and points
eastward into the Middle Mississippi River Valley. Forcing for upper-level ascent should
remain weaker across this area, but isolated to scattered thunderstorms will still be
possible with a few marginally severe impacts. Hail and damaging wind gusts will be the
primary concerns, but coverage of storms should be somewhat sparse. 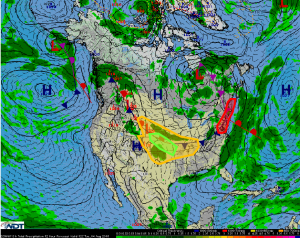