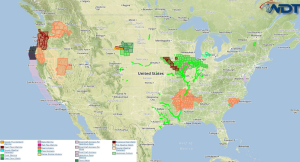 Upslope thunderstorms are anticipated across the Central and Northern Plains today. Storms will pose a risk for hail and damaging wind through the early evening. Northwest flow may sustain storm activity into the evening with the threat shifting into South Dakota and Nebraska.

Further east, an area of low pressure and a cold front are expected to move through the Central US and Midwest. This will pose a broad swath of thunderstorm activity with large hail and damaging winds being possible from the Central Plains to the Mid Atlantic. A few isolated tornadoes will be possible near the Delmarva region.

Storms training from Kansas to the Atlantic Coast will allow for possible flooding. Areas that have already seen plentiful rainfall may see another 1-2 inches with localized amounts of over 3 inches possible. Flash flooding is expected. 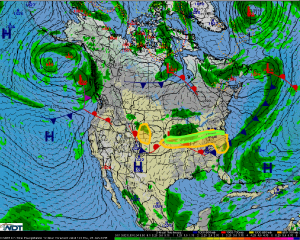