Hazardous thunderstorms are possible Wednesday across Western Nebraska. Heavy rain is also expected for portions of Nebraska and South Dakota.

Western Nebraska:Thunderstorms are expected to develop near a stationary front that is forecast to be stretched across the Central Plains on Wednesday afternoon. Conditions will be favorable for some of these thunderstorms to become severe. Initially, large hail and tornadoes will be the primary hazards, with the threat shifting to damaging winds after sunset. The most likely time for severe weather will be 3 PM –10 PM CDT.

Nebraska and South Dakota:In addition to the aforementioned severe weather threat, the widespread nature of the thunderstorm activity, especially later in the evening, as well as the deep moisture in place, will result in a heavy rain threat across the same area. Widespread rainfall totals of 1 –2 inches can be expected, with locally higher amounts in excess of 4 inches possible in some locations. These heavy rains may lead to flash flooding in low-lying areas, areas near waterways, and areas with poor drainage. 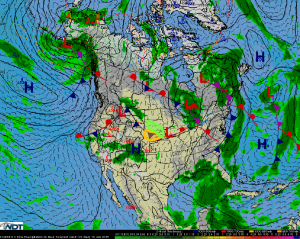