National Weather Summary for Friday, May 8, 2015 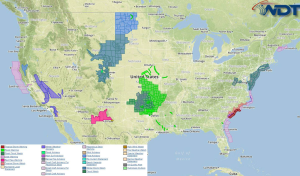 NW-Central Texas/Southern Oklahoma: Overnight model data suggests that a weakly capped environment could see widespread showers and thunderstorms expand from Northwest Texas into Central Texas, as well as parts of Southwest Oklahoma through the morning hours, eventually reaching Central Oklahoma by late morning or early afternoon.Early activity will be hampered by a lack of daytime heating with storms likely to be elevated in nature.This will favor a small wind and hail threat through the morning hours, despite high surface moisture and moderate instability at the surface.By mid to late afternoon, between 1 and 3 pm, more substantial storm development will be possible along outflow boundaries from morning convection across Oklahoma, and also along a drylineacross Northwest Texas. Daytime heating should allow storms across the region to become surface based and severe.Best chance for severe impacts will exist across Southern Oklahoma from Lawton to Davis, and points west and south from a line extending from Amarillo to Waco in Texas. Storms will generally move eastward into the overnight hours with a risk for hail greater than 1.5 inches in diameter, winds gusting in excess of 55 mph, as well as an attendant tornado threat.

Coastal Carolinas:A subtropical low has developed off the Southeast Coast with a broad wind field of 40 to 45 mph winds. This low has a small chance of transitioning to a tropical system over the next 48 to 72 hours before making landfall with the Carolinas. Onshore effects will include an increasing risk for general showers and thunderstorms along with heavy rain. 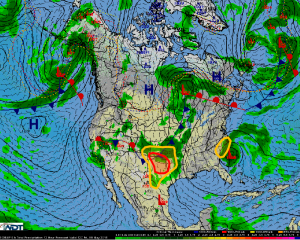