National Weather Summary for Monday, May 4, 2015 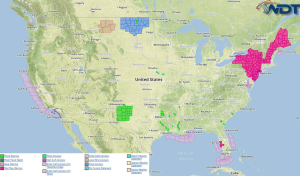 Across the Central US, a warm sector will be in place from the Midwest into the Missouri Valley and Southern Plains. Plentiful moisture will allow for instability to build from eastern Kansas into western Missouri. Lack of upper level winds will not be favorable for organized storm development.

Scattered showers and thunderstorms are likely across from the Kansas/Nebraska border into Missouri and Iowa. Primary threats will be large hail and damaging winds, but an isolated tornado cannot be ruled out.

Further south, upslope winds will allow for thunderstorm development this afternoon across the Southern High Plains,. Large hail and winds in excess of 45 mph will be possible.

Heavy rain and localized flooding will develop across Northwest Texas and Southeast New Mexico where multiple rounds of showers and thunderstorms will be possible with rainfall totals could exceed 3 inches. 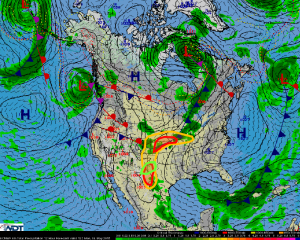