Moderate to heavy snow is expected Friday across New England, especially across Maine. Moderate snow is possible for New Mexico into Southern Colorado. Across Central and Southern Arizona, moderate to locally heavy rain will be possible.

New England: Clipper system will move across New England on Friday, spreading light to moderate snow across much of New England. Most of the snow will fall over the interior, with only light accumulations expected along the I-95 corridor. Much of Vermont and New Hampshire will receive 4 to 8 inches of snowfall, but the White Mountains and most of Maine are at risk for 8 to 14 inches of snow through Friday night. No significant icing is anticipated.

Southern Rockies: The mid-level trough will remain nearly stationary over the Southwest, allowing for continued moderate to locally heavy snowfall across much of New Mexico and southern Colorado. Snow totals through sunrise Saturday will range from 4 to 9 inches across much of the area, but higher accumulations of a foot or a bit more are likely in the highest elevations. There remains a risk for light icing (up to 0.15 inches through Friday night) across portions of southern and central New Mexico.

Central & Southern Arizona:As the disturbance lingers across the desert Southwest, scattered rain showers and perhaps a stray thunderstorm will continue to impact portions of Arizona, far southern New Mexico, and the Rio Grande Valley between Big Bend and El Paso. While rainfall amounts for Friday and Friday night are expected to remain under 2 inches, areas that receive between 1 and 2 inches of rain could experience localized and flash flooding. 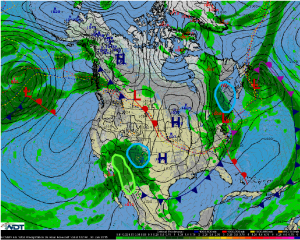