Ohio Valley to Carolinas and Atlantic Coast; Gulf of Mexico coastline of Florida: Low pressure will be lingering around the Mississippi Valley on Tuesday, leaving the front and squall line to continue moving towards the Atlantic Coast. Significant severe parameters are not expected, so as broad of a region of severe weather as Monday is not expected . That being said, thunderstorms with damaging winds and possibly an embedded tornado cannot be ruled out in some areas.

Southern Appalachians to Florida Panhandle: The best environment for severe weather will lie here on Tuesday. At least somewhat modest instability but good shear should allow for a couple of pre-squall thunderstorms and the line itself to produce damaging wind gusts of 60-70 mph, and perhaps a tornado or two.

Central Great Lakes through Florida: Overnight thunderstorm activity through the day Tuesday will produce very heavy rainfall yet again, the heaviest of which should lie on the borders of Tennessee and North Carolina. This region should pose a risk for 3+ inches of total rainfall on the day, while the rest of heavy risk region should see about 2-3 inches on average. 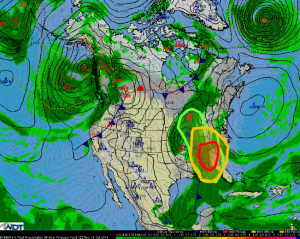