RadarScope 2.2 arrives on the the App Store and Google Play with powerful new free upgrades and the introduction of RadarScope Pro subscription including real-time lightning 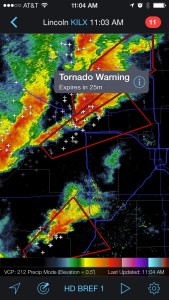 Introducing RadarScope Pro
RadarScope Pro is a $9.99 yearly subscription available via in-app purchase that provides access to the following:

About RadarScope
RadarScope is a specialized display utility for weather enthusiasts and meteorologists that allows mobile, Mac, and tablet users to view NEXRAD radar data and severe weather warnings. This premium application can display the latest reflectivity, velocity, and other radar products from any NEXRAD radar site in the United States, Canada, Guam and Puerto Rico. RadarScope is available on the App Store and Google Play. Follow on Twitter @RadarScope.