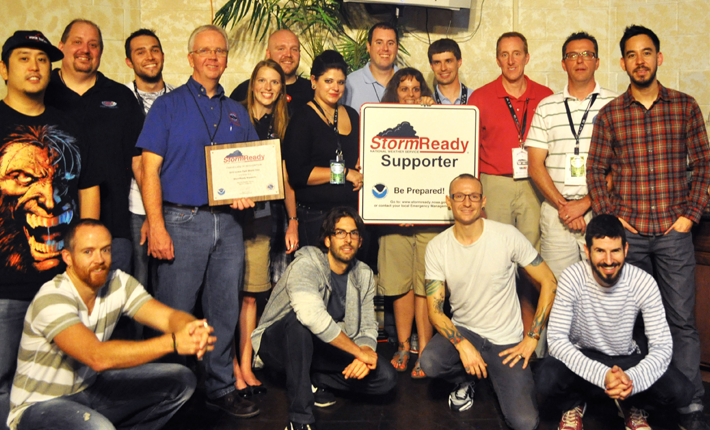 NORMAN, OK - August 23, 2012 - The 2012 Linkin Park World Tour is the first concert tour to be deemed "Storm Ready" by the National Weather Service. The StormReady program recognizes organizations with superior communication and safety skills before, during, and after severe weather. This effort is supported by the services of Weather Decision Technologies®, Inc. (WDT), an Event Safety Alliance corporate sponsor, to provide event-specific meteorological data under its event venue safety model, WeatherOps®.

The StormReady program is designed to enhance an organization's awareness, preparedness, response, recovery, emergency public notification, and public education related to hazardous weather events. In the process it also enhances the overall emergency management plan, increasing the safety of individuals at all levels and phases of significant emergencies and disasters.

In the aftermath of the weather-related tragedies that occurred in Indianapolis and the Netherlands in 2011, Linkin Park Production Manager, Jim Digby, sought consultation from National Weather Service and WeatherOps meteorologists to establish early warning systems and procedures to help ensure the safety of fans, band & crew in the event of severe weather during the current Honda Civic Tour featuring Linkin Park and Incubus.

"It is vital to have an emergency preparedness plan in place when dealing with large venue events," says Rick Smith, Warning Coordination Meteorologist with the National Weather Service Norman Forecast Office. "Receiving the StormReady designation illustrates the concert tour's proactive approach to weather-related hazards and we have confidence that this accomplishment will establish a trend in the industry as a whole."

WDT's WeatherOps team directly supports touring artists, venue managers and production companies, varying the information disseminated based upon precise weather triggers and the specific needs of each client. Forecasts and alerts are provided to key personnel via internet, SMS, mobile apps, mobile push alerts and direct phone access to a Meteorologist 24/7. WeatherOps boasts the highest resolution weather models in the industry, backed by a staff of 75, of which 35 hold Masters to PhD level credentials.

LINKIN PARK is a Grammy-Award-winning, multi-platinum alternative rock band comprised of lead vocalist, Chester Bennington, drummer/percussionist, Rob Bourdon, guitarist Brad Delson, bassist Dave 'Phoenix' Farrell, DJ, programmer Joe Hahn and Mike Shinoda - lead vocals, keyboards, guitar. The band has sold over 50 million albums worldwide, and is the biggest band on Facebook - with over 43 million fans and counting. In the span of time since 2000, when Linkin Park debuted on the Billboard 200 – no other artist has had more top 10 singles on the Alternative chart and, with the release of their latest album, LIVING THINGS (Machine Shop Recordings /Warner Bros), which reached #1 in over 20 countries, no other band has achieved more #1 albums this century. In 2005, Linkin Park founded Music For Relief, a 501 © (3) non-profit organization that has raised over 5 million dollars for victims of natural disasters and environmental projects. www.linkinpark.com