Do Early Tornado Events Portend for an Active Tornado Season this Spring?

After 2011’s tragic number of tornado-related deaths, and the large number of destructive tornadoes that hit densely populated areas, many people ask me if 2012 is going to be as big of a tornado year as last year. Now that we already have had deadly tornado events in February, plus the historical tornado outbreak on March 1st and 2nd in the Southeast, the interest in this year’s storm season is even more intense. The March event was historical because over 110 tornadoes were reported during the 2-day period, surpassing the largest number of tornadoes reported in any tornado outbreak in the month of March. Sadly, there were at least 40 fatalities from this outbreak. 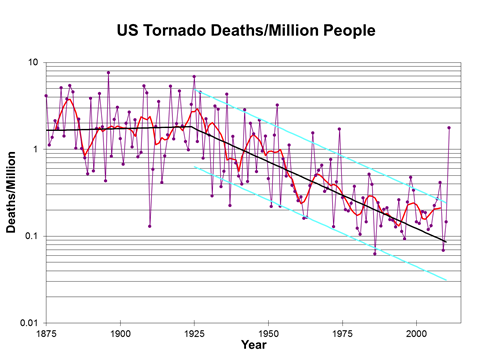 provided by Harold Brooks of the National Severe Storms Laboratory

As you can see in the Figure (provided by Harold Brooks of the National Severe Storms Laboratory), the 552 deaths in 2011 were anomalously large compared to the number of deaths over the past 25 years, and so were the number of tornadoes (1,690 as reported by SPC). For comparison, in the past 10 years, we averaged 1,274 tornadoes per year in the US and an annual average of 56 deaths. In general, the National Weather Service did a great job in providing watches and warnings for the large events that caused a high proportion of deaths in 2011, with warnings often providing more than 20 minutes of advance notice. You can see from the figure below that there is a steady downward trend of tornado-related deaths in the United States over the past 50 years, which is attributable to the continuous improvements in technology and techniques made by the National Weather Service during that period. But last year was far from the norm or trend, hopefully we will not see another year like it for a long time.

Will 2012’s tornado season be as terrible as 2011? The short answer is that statistically speaking, it’s highly unlikely that the number of tornado deaths in 2012 will match or exceed the numbers in 2011. The reason for this is simply because in 2011 many EF-4 and EF-5 tornadoes struck high density urban centers, and simple odds make it unlikely this will happen again in 2012. This is not based on any physical reason other than statistical probability.

Regarding the number of tornadoes expected for this year, that is an interesting scientific question. I have talked to many people in the Norman weather community over the past couple of weeks and asked them what they thought the Spring Severe Storm season would be like. The consensus is that Spring 2012 will likely be an active severe weather year but no one believes it will be as active as 2011. I have heard this from research scientists, storm chasers and operational meteorologists. The reasons that each knowledgeable person gave me varied, but in general most people agreed that the large scale weather patterns are different now than they were in 2011 so we should expect different results.

Looking back at 2011, there were many meteorological reasons for the large number of tornadoes and strong destructive tornadoes; one of the key reasons was that a very strong jet stream set up which frequently pushed upper-level energy to the Southeast part of the U.S. contributing to the outbreaks. This is more common during La Niña events, which is a phenomenon where sea surface temperatures in the central and eastern Pacific around the equator are cooler than normal.

In early 2012 La Niña is still around, but climate forecasts for the next few months suggest that the current La Niña condition is fading fast and likely by the May time frame will be in a near neutral (normal) pattern. Another key ingredient to severe weather is warm moist air. And in the South and Southeast this winter there have been very few strong cold fronts that have penetrated all the way through the Gulf of Mexico; so Gulf sea surface temperatures are already near 70 degrees.

What does this mean for weather and storms east of the Rockies during the spring storm season? Based upon discussions with a large number of my “severe weather expert” friends, I would say there are two camps, one that believes that early events this spring in the SE will likely continue due to the large scale weather patterns and the warm moist air that is nearby, creating a good environment for storms; then as La Niña abates and upper level patterns shift, storms and tornadoes will be reduced and tend more towards climatology as we get to the May time frame, this would result in a slightly above average year for tornadoes with the biggest events in the Southeast in March and April.

The second camp is similar in that they believe that early in the year there will be the strong and frequent severe storms in the SE for the reasons stated above but this camp believes that as La Niña abates and upper patterns shift, that energy will be directed over the Central Plains causing more frequent and severe events in that region in May and June. In this scenario, we would expect a very active year in total with the number of tornadoes well above climatology.

I personally am in the second camp. I believe that the most likely scenario is for the most frequent and severe storms to be in the SE in the next two months and then we should see that energy and thus storms move west into the Central Plains culminating in a very active severe weather and tornado season.

March 1st starts the unofficial “tornado season” in the Central Plains. There will be big tornado events and sadly people will be killed. Everyone that lives east of the Rockies should own a weather radio for your home and have the iMap Weather Radio App on their iPhone (WDT launched version 2 on March 2nd, Android launches in late April). Both provide lifesaving alerts. iMap Weather Radio provides “follow-me” alerts plus an interactive map with your location and the warnings overlaid on top of radar data. Additionally, in areas where WDT has media partners you can watch their live streaming television feed within the app during severe storm events. WDT has spent three years developing iMap Weather Radio and has a fully redundant computing infrastructure to ensure that watches and warnings are delivered in a timely manner. We are very proud of the app and the alerting systems we have built, and our goal is to save lives.

Over the coming months I will post to this blog at least once a week and more often during severe weather events.