Most of Texas and the western half of Oklahoma our under an “Exceptional Drought” as determined by NOAA. See (Pic 1). If normal rainfall occurred over the state of Texas for the next few years it will still not alleviate this drought. But what is needed is a large slow moving tropical system that dumps a lot of rain on the area.

Could Tropical Storm Don be the answer to their prayers in Texas? Check out the forecasted movement of TS Don in (Pic 2) and follow its movement and forecasts on iMapWeather.com.

It is conceivable that up to 8-10 inches of rainfall could fall over a large area in West Texas as part of TS Don making landfall somewhere between Houston and Brownsville! This will not completely alleviate the drought, but will make a significant dent in it. 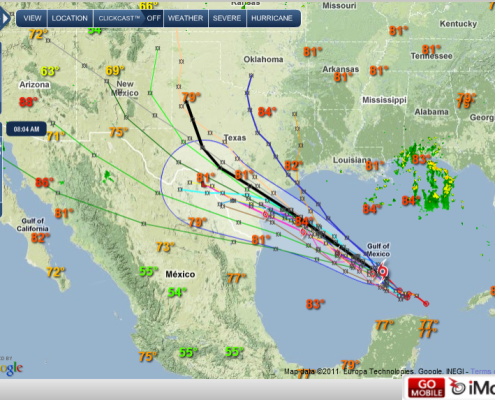