App is a weather radio for mobile devices, providing early, location-based text and voice alerts 24/7 for individuals in the path of a hurricane 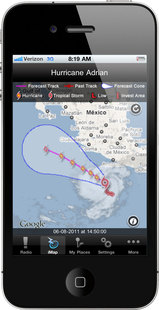 "Meteorologists are saying this year’s hurricane season could be very dangerous,” said Mike Eilts, President and CEO of WDT. “It is important for families to be as prepared as possible to combat the severe weather associated with hurricane landfall, and with the iMapWeather Radio app, they are getting early and location-specific warnings day and night about danger coming their way.”

iMapWeather Radio displays severe weather layers including the “cone of probability” for hurricanes approaching landfall. Users can view the cone in relation to their current and saved locations and receive weather alerts such as hurricane winds, watches and warnings. With the probability of hurricanes spawning other forms of violent weather, the application also provides additional alerts such as flash floods, severe thunderstorms and marine warnings.

iMapWeather Radio is a highly advanced weather radio app for the iPhone, iPad and iPod Touch, providing information on severe weather like tornadoes, floods and hurricanes with precise location-based text and voice alerts. The app “wakes up” the phone and provides an early voice warning to help individuals and families seek safety - even in the middle of the night, or when the power goes out. With “follow me” alerts, users are notified of severe weather danger in their exact location and up to five additional locations allowing them to track family or property that could be in the path of a dangerous weather system.

iMapWeather Radio launched on May 3rd of this year and to date, there have been over 200,000 downloads of the app and over 3 million emergency alerts sent to users.

The iMapWeather Radio app is available for $9.99 from the App Store on all iPhones, iPads and the iPod Touch or at http://bitly.com/iMapWeatherRadio . It will also be available at the Android app store for Android devices later this year.