CNN coverage of the tropical disturbance using iMapLive! can be viewed at: 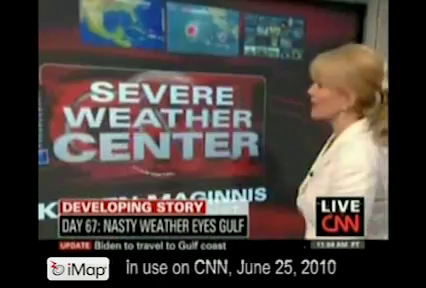 CNN also made use of iMapLive! to cover yesterday’s Canada earthquake. CNN meteorologist Chad Myers used iMapLive! to show the location of the 5.0 quake, which shook the Ottowa region on June 23rd . This time, Myers showed the epicenter’s distance from populated areas.

CNN coverage of the Canada earthquake using iMapLive! can be viewed at:http://www.cnn.com/video/?/video/world/2010/06/23/nr.myers.earthquake.cnn